Thoughts On This Veteran's Day ... 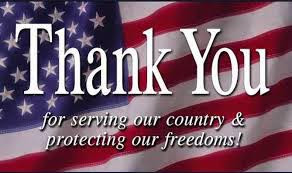 As I contemplate the ongoing service of our nation's military veterans, I am nearly overcome with emotion.  This nation has been at war for over 14 years, and the continued dedication of most of our military personnel -- in the face of exhaustion, dismantlement, disrespect, and dishonor from the likes of the Veterans Administration -- amazes and astonishes me.
We have fought in big wars under a Republican President (Afghanistan and Iraq), and small wars under a Democratic President (Libya and Yemen, for the obvious ones), and it has cost us nearly 7,000 lives and billions of dollars.   Unlike the last World War, there doesn't seem to be an end goal in sight, and the path to victory seems blurred.  Yet the men and women who fight in our armed forces remain steadfast and unwavering in their commitment to defend this nation from enemies foreign and domestic.  And in that, they share the legacy of all those who have come before them.
Would it astound you to know that the total number of Americans killed in U.S. Wars is more than 1.1 million?  And that doesn't take into account the veterans who fought in the French & Indian War before this nation officially existed.  And would it further amaze you to know that America has been at war -- in one form or another -- for 222 out of its 239 years?  That's 93% of its existence!!  That leaves us with the fact that we have only been at peace for 21 years since the birth of this nation! (For a year-by-year timeline of America's major wars from 1776-2011, click here.)  Whether these statistics mirror the experience of all mankind is a subject for another day; today I want to focus on those who have served our nation in armed combat.
Along with those facts come the statistics of our fallen veterans ... Nearly half a million died in our Civil War, and over 400,000 in World War II; and, as I mentioned, we have lost nearly 7,000 veterans in the Global War on Terror.  These are the statistics coming from the Department of Defense and the Department of Veterans Affairs.
As exemplified by the numbers, about 12% of the population served during WW II, resulting in the fact that most Americans were likely to know or be connected to someone in the military.  Today, less than 1% serve, and there is the danger that our society is suffering from a disconnect -- we are less likely to know what is going on, someone who has served, or what they have experienced.
Gala True, a medical anthropologist and folklorist with the Department of Veterans Affairs and contributor to the Library of Congress’ Veterans History Project, says, “So few have served, that it’s very easy for people to say that ‘I didn’t want these wars,’ but that doesn’t mean that we aren’t all part of this [experience of war]".  So that is one aspect that is different for this generation of veterans.
Author James Fallows, of The Atlantic, writes, "When I was a kid in the ’50s and ’60s and then older in the ’70s, American pop culture reflected a country familiar enough with its military to make fun of it at times. You had shows like “Gomer Pyle,” or “Hogan’s Heroes,” or “”McHale’s Navy.”  You had works of art like “South Pacific” or novels like “Catch 22″ and even movies like “MASH.” {These films] respected the importance of the military and the important things it did that were heroic in the large scale, like World War II, but it was still made of real people with their real foibles.  But now we have started to have this artificially reverent view of the military that’s also distant and disengaged."
There is another important distinction that separates this generation of Americans from those of the past.  During World War II, even if you didn't actively serve, you participated, through rationing, scrap drives, blood drives, and so on.  Everyone was connected to the war effort.  And everyone believed in our mission.
Can we agree that this is no longer the case?  Or that it is becoming increasingly difficult to identify our mission?  There are those who will point to our astounding statistics of war since WW I -- the cost in treasure and lives -- and say that it points to our lust for war, and supports a 2014 International Gallup poll that America is the #1 threat to peace in the world.  I dispute that.  But I must admit that I no longer have a clear vision of our national leaders and their perspective or objectives concerning this nation's involvement in world conflicts.
That being said, my support for our nation's veterans will never waver.  I am in awe of their continued sacrifice and willingness to put the safety and security of this nation before themselves and their families.  It is an unselfish act to step into the gap between their fellow countrymen and an enemy that desires to defeat us -- and it is both honorable and righteous.
So I salute all this nation's veterans; from the first colonial farmer who grabbed his musket and joined the ragtag Continental Army, to the millions who have served over the last 239 years; from the 18-year-old recruit at boot camp to the elite fighting forces of our special operations units.  This salute is not about the morality of wars we have fought, or the policies of Presidents.  It is about the veterans.  They have served so that others might live their lives free.  Such service by an individual towards his fellow man deserves our absolute respect.  May God Bless you all for your sacrifice and your commitment to our nation.