The President of Hollywood

Sometimes there is an advantage to being connected to social media, because I think we all know that if you are paying attention, the Enemy is giving us plenty of clues as to how he operates.  So, that's why I am grateful to a young friend of mine who pointed me to a short YouTube video that she came across in her daily examination of the online culture. 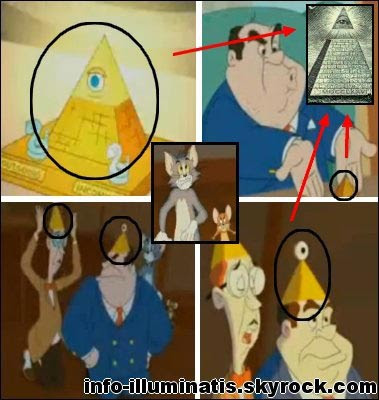 It's a quick little cartoon featuring the long-time cartoon characters Tom and Jerry.  In this little snippet, we see the cartoon cat and his mouse buddy auditioning for a TV show.  But the short, one minute video reveals a forbidding, though not surprising, truth... our title characters are allowed to see who the President of Hollywood is, and it is none other than Satan.  What is interesting is that the TV executives interviewing Tom and Jerry receive a phone call from the Hollywood President ... not from a regular phone on their desk, but from a pyramid-shaped instrument with the all-seeing eye that summons the demonic overlord of Hollywood.
When he is summoned, he swirls around in a serpent-like pattern until he manifests into a simpler cartoon version of Chernabog, the Satanic Disney character from Fantasia that I referred to in this blog post.  There is also a longer version of the video (nearly 4 minutes), in which we are allowed to see just how the President of Hollywood uses his Illuminati underlings to maintain control of the entertainment industry.  When Tom and Jerry beat up the TV exec after realizing the contract they have signed is unethical and immoral, the stunned exec announces that maybe it's time to start developing moral, family-style entertainment -- at which point the Illuminati administrators destroy him and offer the prestige of the position, and the perks of beautiful women, to a more easily manipulated schmuck.
I know this won't surprise you; anyone with any kind of discernment can see that the entertainment industry is serving the prince of this world.  And if you are disinclined to receive the hints of a cartoon, then it should be plain to you in the recent vitriolic display coming from Hollywood director Quentin Tarantino.  In his poisonous anti-cop rants, I wonder if Tarantino is not doing the bidding of his Illuminati handlers.  Because you see, it is not just that Satan's servants wish to control the entertainment industry; I believe they see it as a vehicle to bring about the complete destruction of our culture, society, and yes, even our country. 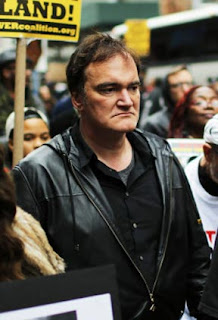 Do you not find it interesting that Tarantino's sudden appearance on the culture stage, is aligned with the Black Lives Matter movement and its subordinate element, RiseUpOctober?  Would it surprise you to know that one event at which Tarantino was invited to voice his angry criticism of police was one organized by Carl Dix, one of the founding members of the Revolutionary Communist Party, a group that has held anti-police events in October for nearly two decades, and that openly advocates for an armed overthrow of the United States of America?  Do you think it is coincidental that these two have suddenly teamed up (seemingly out of nowhere) to promote an agenda caused to wreak havoc in our society?
So what does all this mean?  Can we believe the not-so-subtle message of a cartoon video?  Should we take seriously the active participation of Hollywood in the conjuring of social discord and conflict?  Is Communism still a major threat to this country, and are we still suffering from an "anti-McCarthyism" backlash from the 1950's?  Is that why the media and politicians are hesitant to point out the connections between Mr. Dix and Revolutionary Communist Party chairman, Bob Avakian?
It's all right there for the discerning and wise to see...  From the clever cartoon, to the schemes and conspiracies of duped filmmakers and revolutionaries.  They are all convenient tools for the devil to accomplish his goal of world domination.  But he is missing one little subplot from Tom and Jerry... that pyramid with the all-seeing eye that summoned the President of Hollywood is a false idol.  There is only One Being that is All-Knowing and All-Seeing, and the machinations of the Evil one cannot destroy God's Sovereignty or His Will.  Let them think that they are carrying out their sneaky little plan.  We already know the outcome, and the Day of the Lord is at hand.

Hebrews 4:13    "And no creature is hidden from His sight, but all are naked and exposed to the eyes of Him to whom we must give account."
Posted by Pam Kohler at 7:00 AM