I want you to quickly revisit my blog post of Saturday.  I told the story of a Washington State football coach, Joe Kennedy, whose school denied him the right to pray with his players after each football game; in his words, "To thank God for each of them."  He was, in essence, accused of proselytizing students without their permission and told that religious expression at a public school is not allowed by the Constitution.  That's a cursory summation, but it comes pretty close to representing the facts. 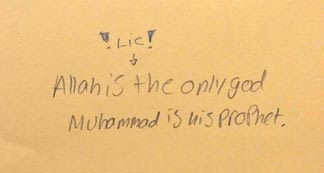 So, now juxtapose that story with the following one I'm about to tell you.  This time, the narrative  takes place in the state of Tennessee.  It seems that in dozens of Tennessee public school districts, the kids are required to memorize the five pillars of Islam and are instructed to write “Allah is the only God."  One parent said more than 20 pages of her child’s social studies textbook is devoted to studying Islam.  I'm sure it won't surprise you to learn that this amounts to three weeks of classroom instruction; more time than is spent teaching the seventh-graders about Christianity.  “In all of the homework my children have ever brought home, I have never seen the level of detail about other religions,” said one mother, Laura Jones. “I was completely speechless.”
In this instance, the parents' Congresswoman has their backs.  Representative Marsha Blackburn said, “There is a big difference between education and indoctrination.  It is reprehensible that our school system has exhibited this double-standard; more concerned with teaching the practices of Islam than the history of Christianity. Tennessee parents have a right to be outraged and I stand by them in this fight.”
Tennessee State Representative Andy Holt had this to say, “This ‘teaching’ also occurs while Tennessee students are simultaneously being told they cannot fly American flags and are being discouraged from praying while at school.  Many of our children are not being taught the Ten Commandments in school, but instead the Five Pillars of Islam and the ‘Prophet’ Muhammad as a sovereign to Jesus Christ.”
Of course, those who are proponents of this indoctrination, such as Paul Galloway, the executive director of the American Center for Outreach, say that parents just don't understand; the middle-school kids being taught about Islam are simply repeating the tenets of the Islamic religion, and that won’t turn anyone into a Muslim.  Really?
So, why is the same argument not allowed to stand for Coach Kennedy?   He simply wants to thank God for his players and the privilege of teaching them leadership and good sportsmanship.  Can't they see that his simple prayer won't turn anyone into a Christian?  And why we're scrutinizing the false reasons for teaching Islam in the public schools, I want to take offense at Mr. Galloway's next justification.  He says the word “Allah” in Arabic means “God.”
“So, Christians who speak Arabic use the word Allah to talk about God all the time,” Galloway explained. “There is a basic level of misunderstanding driving this fear and outrage.”  Ummm, I don't think so, Mr. Galloway.  Parents know exactly what is going on when their children are instructed to stand and recite "Allah is God" every day.  And they are very aware that Allah is not the One True God.  "Allah" and "God" are not the same, and they are not interchangeable.
But the parents in Tennessee are not the only ones who are facing this dangerous situation in their children's classrooms.  Jay Sekulow, of the American Center for Law & Justice (ACLJ) says this is not an isolated problem.  “Earlier this year, we reported that public school students in Madison, Wisconsin were given an assignment to ‘pretend you are Muslim,’ while public school students in Florida were instructed to recite the Five Pillars of Islam as a prayer, make Islamic prayer rugs, and perform other Muslim rituals,” Sekulow wrote on the ACLJ blog. “Suspiciously, the textbook discussing Islam had chapters missing. Which chapters? Those on Christianity and Judaism.”
As Sekulow correctly pointed out, imagine the outcry of atheist groups, if students were instructed in a lesson plan that ‘Jesus is the Son of God,’ or if children were told to recite the Lord’s Prayer.”  The hypocrisy is not only obvious and maddening, it is deliberate and dangerous.  It is incumbent upon all parents to know what their children are being taught in school.  Ask to see their homework. Many schools these days give parents online access to class assignments.  Take the time to check them out.  We know there is an agenda pushing this, and we know it is coming hard and fast.  Satan does not have much time left, and our children are a vulnerable target.  Be in the know and get in the fight!

Thanks to Rod Kackley at PJ Media for his reporting on this issue.

John 17:3    "And this is eternal life, that they know You, the only true God, and Jesus Christ, whom You have sent."