Once again, Americans who support our Second Amendment rights are getting a little nervous over recent comments by the President after the Oregon college murders.  Just what did he mean when he said that "other countries [like Great Britain and Australia] being able to craft laws that almost eliminate mass shootings."  I guess the "almost" was quite appropriate since one day after the Oregon shooting, an alleged 15-year-old gunman in Australia, described as “a radicalized youth of Middle Eastern decent,” shot and killed a New South Wales police civilian.  Once again, we see that strict gun control laws will never eliminate all gun deaths.
But that wasn't the only warning we're receiving.  At a press briefing, White House Press Secretary Josh Earnest confirmed that President Obama is preparing a series of executive actions on gun control to match the stronger tone and passion of his post-Oregon news conference.  Earnest emphasized that gun control measures are a "high priority" for the White House, and “I can tell you that they’re not stumped, they’re continuing to review the law that’s on the books and continuing to consult with legal authorities, but also others, who may have ideas about what steps that can be taken to keep guns out of the hands of criminals."
But we all know what that means ... stricter measures and steps to keep guns out of the hands of all citizens.  Yet I cannot understand why it is so difficult for those citizens who applaud more gun control to see where it inevitably leads.  Without the ability to defend ourselves against terrorists, criminals, or an out-of-control government, we are all potential victims of not only chaos and death, but full-blown genocide.  In case you think that I'm blowing things way out of proportion, I'd like you to consider the facts as presented by an organization called Jews For the Preservation of Firearm Ownership (JPFO).  As perhaps the most well-known victims of gun control measures that resulted in genocide, I think they have a salient argument.
Their message is simple: "Disarmed people are neither free nor safe - they become the criminals' prey and the tyrants' playthings." When the civilians are defenseless and their government goes bad, however, thousands and millions of innocent people die.  In other words, when political power becomes too focused on control, the individual rights of a nation's citizens are endangered.  For that power to ultimately control the citizenry, the people must be disarmed.  To prove that point, here is a quick history lesson... 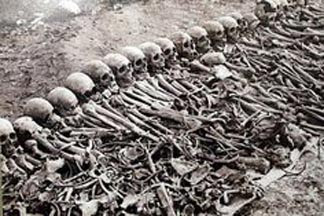 •  From 1915-1917, the Ottoman Empire killed approximately 1 to 1.5 million Armenians (mostly Christians).  To accomplish this genocide Turkey enacted laws that required permits for gun ownership, which resulted in a Government list of owners, and an eventual ban on possessing firearms.
•  From 1929-1945, the Soviet Union killed 20 million people; among them political opponents and whole farming communities.  Their gun laws included licensing of owners, a ban on possession, and severe penalties for disobeying gun laws.
•  From 1933-1945, Nazi Germany killed political opponents, Jews, Gypsies, critics and those deemed "unsuitable" -- totaling nearly 20 million people.  Again, gun laws required registration and licensing; stricter handgun regulations; and finally, a ban on gun possession altogether.
•  From 1927-1949, Nationalist China killed 10 million people, including political opponents and Army conscripts that defied them.  Their methods of gun control included a Government permit system and a ban on private ownership.
•  From 1949-1976, Communist China was responsible for the deaths of 20-35 million people (the figure is hard to define due to the level of atrocities and inability to document missing persons -- they just simply disappeared).  Political opponents, enemies of the State, and complete rural populations were destroyed.  Red China instituted laws that resulted in prison or death to "counter-revolutionary criminals" and anyone resisting any government program.  There was also a death penalty for supplying guns to such "criminals".
•  There was a purge in Guatemala from 1960-1981 of Mayan Indians and political enemies of the State.  Between 100-200,000 people were killed.  The government implemented a registration of guns and owners; high licensing fees for owning guns; a prohibition on carrying guns; a ban on guns and sharp tools; and ultimately, a confiscation of all guns.
•  From 1971-1979 there were 300,000 people killed in Uganda -- mostly Christians and political enemies.  Through Firearms Ordinances and Acts, the government began a program to register all guns and owners; require licenses for transactions; issued warrantless searches; and you guessed it ... confiscated guns.
•  From 1975-1979 the diabolical Khmer Rouge in Cambodia decimated 2,000,000 lives!  They wiped out educated people and their political enemies.  They accomplished this through requiring licenses for guns, owners, ammunition & transactions; requiring a photo ID with fingerprints on all citizens who owned guns; and requiring that licenses be inspected quarterly.
•  And in 1994, 800,000 Tutsis were murdered in Rwanda.  Owners of guns had to register their weapons and ammunition.  They needed to provide a justifiable reason for owning a gun.  Concealable guns were outlawed; and of course, eventually all guns were confiscated.
This is not, by any means, the complete list of genocide during the 20th Century.  There have been 7-10 million Ukrainians killed, and let's not forget the million or more in Bosnia and Serbia throughout the 20th Century.  But I believe that this approximate number of 90 million people gives ample reason to be concerned when governments begin talking about limiting gun ownership or "executing" stricter laws regarding the purchase and manufacture of guns.
It is irrefutable in the above statistics -- these totalitarian governments murdered their own citizens; far more people were killed than by wars or common criminals.  And how could this happen?  Because the people were disarmed and unable to protect themselves.  The history is there, and is hard to ignore.
I want to be clear ... I am not prepared to say that this is what our own government has in mind.  But when coupled with the above historical facts; the rush to global "gun control policies" by the United Nations; the soaring crime rates in other countries, such as Britain, after gun prohibition (sorry, Piers Morgan, but it is true!); and the increase in racist and religious attacks on citizens around the world.... well, it just seems downright foolish to think that more gun laws are going to inhibit violence.
Personal self-defense is every single person's right.  I believe it is a God-given right.  Yes, we are told, "If possible, so far as it depends on you, live peaceably with all."  But, the Word also says there is a time to battle and defend yourself, a time to "Beat your plowshares into swords, and your pruning hooks into spears; let the weak say, “I am a warrior." (Joel 3:10)  Unfortunately, there is evil in this world, and we must be allowed to defend ourselves against it.  History has shown us that an unarmed citizenry is overrun by the evil, and restrictive gun laws were the overriding factor in Evil's victory.  I pray we do not become history's next victims.