Last week, I published a post on the emotional subject of the humanitarian crisis in Europe caused by the thousands of Middle Eastern and African refugees fleeing chaos and murder in their homelands.  Today I am presenting the controversial side of this issue, which is likely to become a lightning rod for discussion and debate.  There should be none of us who are ignorant of the tens of thousands of emigrants leaving their countries for the safety and sanctuary of Europe.    This flood of refugees certainly appears to be the aforementioned humanitarian crisis, due to the thousands who have been uprooted from their homes because of violence, persecution and death at the hands of the Islamic Caliphate.  Among these refugees are Arab and African Christians who are targeted because of their faith, and have been threatened with death if they do not convert to Islam.  It is hard to argue with their reasons for leaving their homeland. 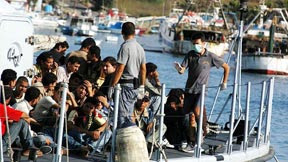 John 3:20    "For everyone who does evil hates the Light, and does not come to the Light for fear that his deeds will be exposed."
Posted by Pam Kohler at 7:05 AM