Kim Davis And The Apostle Paul

Just as in the case of the refugees storming the borders of Europe, there is no easy answer to the situation involving the County Clerk in Kentucky who refuses to issue marriage licenses to gay couples.  Kim Davis has made her position clear:  she can’t comply with the U.S. Supreme Court’s ruling legalizing gay marriage nationwide, because it conflicts with the vows she made when she became a born-again Christian.   “To me this has never been a gay or lesbian issue. It is about marriage and God’s word.”  So, she has chosen to go to jail rather than disobey her conscience.
Naturally, her life as a Christian has come under review ... the multiple marriages, the questionable births of her children, the controversy surrounding her exorbitant salary.  It is not my purpose to judge her or question her faith.  Ultimately, we must accept her statement that she "surrendered her life to Jesus Christ" four years ago.  Rather, the purpose of this blog post is to ask ourselves, "What would we do in her place?" 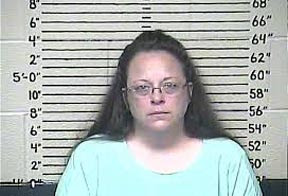 Like many of us Christians, Davis is faced with a quandary ... God's moral law conflicts with the laws of the State (in this case, the Supreme Court decision to allow gay marriages).  But she works for the State, therefore it is reasonable to ask, "Should she be forced [within the jurisdiction of her job] to do something that goes against her religious convictions"?  At the same time, it is also rational to ask, "If you cannot perform the duties that you took an oath to uphold, why not quit your job in order that you do not go against your moral beliefs"?
It is not up to us to question Ms. Davis's faith.  She has stated that her conscious will not allow her to  violate the vows she has made to God when she recognized Jesus as her Savior.  Those vows amount to a personal oath to God, Himself.  Now, the federal judge in this case has acknowledged that oaths mean something ... and he maintains that her oath as a federal employee trumps her oath as a Christian.  But what if the circumstances of the oath she took to perform her official government duties has changed since she initially took that oath?  What should be her course of action?
To be honest, I have struggled with what I would do in her place.  Those who think she's gone too far in her objections to performing her official duties will point to the following passage in Romans 13:

1 Let every soul be subject to the governing authorities. For there is no authority except from God, and the authorities that exist are appointed by God.
2 Therefore whoever resists the authority resists the ordinance of God, and those who resist will bring judgment on themselves.
3 For rulers are not a terror to good works, but to evil. Do you want to be unafraid of the authority? Do what is good, and you will have praise from the same.
4 For he is God’s minister to you for good. But if you do evil, be afraid; for he does not bear the sword in vain; for he is God’s minister, an avenger to execute wrath on him who practices evil.
5 Therefore you must be subject, not only because of wrath but also for conscience’ sake.
6 For because of this you also pay taxes, for they are God’s ministers attending continually to this very thing.
7 Render therefore to all their due: taxes to whom taxes are due, customs to whom customs, fear to whom fear, honor to whom honor.

"See!", they'll say.  "The Bible tells her to do her job.  The Supreme Court's decision was appointed by God. She is resisting God's directive, and now she's in jail, which is the judgment she has brought on herself."  But is that really what Paul is saying?  Our home church group recently studied the Book of Romans, and when you study Romans 13 within the context of history and what Paul was warning about, it really has great relevance for us today. 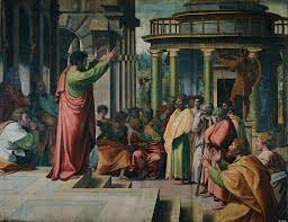 Just prior to this well-known letter to the Christians in Rome, Paul had stated at the end of Chapter 12, that he wished them not to take revenge, to leave the way open for God’s vengeance, and to “overcome evil with good.”  So what, exactly, was Paul seeing at this time that he followed this verse with the Romans 13 command to be subject to the governing authorities?
History tells us that Paul was planning to visit Jerusalem, where there were many political tensions.  The Romans viewed Christianity as a “superstition” and bad for society.  (Sound familiar?) They believed that proper "piety" to the Roman gods helped to sustain the well being of the cities and their people.  (We could liken that to bowing down to today's secular god of political correctness). So it is within this context that Paul is writing about obedience to civil authorities.
Emperor Claudius reigned until 54 AD, and Jews were causing so much civil unrest that he had them expelled from Rome (Acts 18:32).  After Claudius, Emperor Nero came to power in 54 AD (at the age of 16), and it might have been him that Paul had in mind when writing the Romans 13 letter.  Remember, before this, the Christian Church and community was thought of as a group of dissident Jews.  (Jesus had been brought before Pilate for “disturbing the peace”). Now, under Nero, Christians begin to be distinguished from Jews, and are becoming a target.
Just how much of a target would become evident in the later accounts of Nero clothing Christians in the hides of beasts and letting them be torn to death by dogs; others were crucified, others set on fire to serve to illuminate the night when daylight failed.  But perhaps Paul is seeing the trend that has been set by Claudius and that Christians, under Nero, are becoming a target.  He is warning them to “play it cool” so to speak, and obey the authorities, not calling attention to themselves.
From this historical context, here is how my thoughts are running ... the primary focus is on the individual citizen and how we are to react to governing authorities … do what is right to avoid God’s wrath and punishment and vengeance (Verses 4- 5) … he is God’s servant for your good (Verse 4), appointed by God.  Now, I don't see where these verses specifically address the idea of a bad or evil governing authority.  Perhaps because even the bad ones are appointed by God to discipline us?  And even if that’s the case, we are to act righteously, as verse 5 tells us …. as a matter of principle and for the sake of our conscience.
So, can we agree that although government authority is established by God, and is good in itself, it is sometimes used in an evil way?  Is Paul telling us that Christians should not fight against the government, repaying evil for evil, but are to respond with good behavior?   I believe that the Apostles were faced with very similar decisions as Ms. Davis (and with which we will all be subject soon), and the choices are slim:  1) As long as government is consistent with Christian duty, they are to be obeyed – even when oppressive, or 2) What if the government fails in their duties to do right according to Godly principles, and what if they restrict the freedom to worship our faith?  No earthly power can force us to go against God… it is our responsibility to God to resist.  If the government commands a sin, then we have to disobey.  This directive is apparent in Acts 5:29 when Peter and the other apostles replied: “We must obey God rather than human beings!"
As you can see, there is no clear-cut answer!  I think this is something that each Christian must decide for himself, according to his/her conscience after seeking an answer from God as to how they are to proceed.

I have often written in this blog that Dietrich Bonhoeffer, the Lutheran pastor in WWII Germany, made the decision that his conscience bid him to get involved with a plot to assassinate Hitler.  He felt strongly led that he must stand up to the greatest evil in his time, even if it meant he advocated the murder of another man.  But he prayed that when he stood before God, the Lord would understand his heart and his motives. Evil must not be allowed to stand!
Kim Davis has taken two oaths; one to her Father in Heaven, and one as part of the governing authorities established by God.  Which one does she owe allegiance to?  She must violate one in order to perform the other, and she has been forced to choose.  The Bible tells us not to make oaths without considering the possibility of future ramifications.  We see what happened to Jephthah, the Judge of Israel who made an oath to sacrifice the first person he saw on returning home from battle, if God would deliver the Ammonites to him in victory (Judges 11).  It cost him the life of his only child, his precious daughter.
But when Kim Davis took her oath in office as a Kentucky County Clerk, this is the oath she took:  "I do solemnly swear (or affirm, as the case may be) that I will support the Constitution of the United States and the Constitution of this Commonwealth, and be faithful and true to the Commonwealth of Kentucky so long as I continue a citizen thereof, and that I will faithfully execute, to the best of my ability, the office of County Clerk according to law;".  At the time, she could not foresee the rapid road we have taken to legalize gay marriage.  So, she has made the decision to go to jail rather than concede.
If you read all the various opinions on her decision, you will see people calling her everything from a modern saint to a hypocritical, belligerent, and aggressive Christian.  I cannot know who she is in her spirit, but I think I can understand her choice for this reason:  the only biblical reason for violating an oath is if the objective of the oath is sinful.  If, as a Christian, one can never bind himself to sin, her oath as a civil servant is invalid from its inception and consequently, is not binding.  Does that give us our defining answer?  I would not be so arrogant as to suggest that, but it certainly is a valid point.  Furthermore, I think that this circumstance should be a warning to each of us.  We must be forming our own Biblical standards and what we understand to be the Holy Spirit's counsel on this matter.  Because, just like the Christians in First Century Rome; Dietrich Bonhoeffer in Hitler's Germany; and Kim Davis in rural Kentucky --- we are all going to have to decide where to draw the line in the sand in our obedience to our God.

1 Corinthians 4:3-4   "But with me it is a very small thing that I should be judged by you or by any human court. In fact, I do not even judge myself. For I am not aware of anything against myself, but I am not thereby acquitted. It is the Lord who judges me."

Email ThisBlogThis!Share to TwitterShare to FacebookShare to Pinterest
Labels: Constitution, Faith, The Bible