What Will This Day Bring?

It happened on Friday.  Wall Street's stock market suffered its biggest loss of the year.  That's right... the Dow plunged 531 points, which is its worst week since 2011.  And if you listen to the talking heads, such as those on the CNN website Money, they will tell you that the big drop was due to three major events in the world-wide economy:  1) China's economy is slowing down faster than their government would like you to believe;  2) The growing uncertainty over what the Federal Reserve has planned for September -- will they raise interest rates or not?;  and 3) Oil prices have dropped below $40/barrel, signaling a decline in the one industry that has been keeping the American economy afloat. 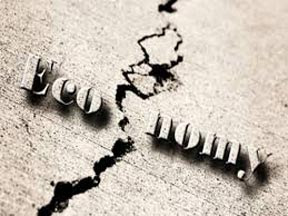 Of course, those who make their living off selling you those stocks on Wall Street will tell you that this is just a natural "correction"; and that we are still not at the predicted 10% adjustment, so don't be surprised if we see a further drop.  But don't worry, we're in the stock market "for the long term" and stocks will bounce back; they always do.
But there are others, such as MarketWatch, who say, "It’s not just about China, or Greece, or slowing earnings, or the 'death cross' on Apple’s stock. It would be because, for the past 30 years, Wall Street stock prices have been increasingly boosted by financial factors: collapsing interest rates and Federal Reserve manipulation, culminating most recently in 'quantitative easing.' But at some point, that game has to come to an end."
I am just a normal citizen, with a level head and pretty good discernment, so it is not hard for me to agree with the basis of that statement.  It just makes sense that we cannot continue to spend money we don't have, while printing fake money to pay our sky-rocketing debt.  And fancy words like "Quantitative Easing" don't fool me.  In plain English, it's nothing more than manipulation -- or to put it more succinctly, a clever and unscrupulous way of controlling our financial situation and economy.
But here, let a more experienced person lay it on the line for us ... Michael Pento is a well-established specialist in the Austrian School of economics and a regular guest on CNBC, Bloomberg, FOX Business News and other national media outlets. His market analysis can also be read in most major financial publications, including the Wall Street Journal. He also acts as a Financial Columnist for Forbes, Contributor to thestreet.com and is a blogger at the Huffington Post.  What he has to say makes a lot of sense.
In an article on King World News, Mr. Pento cites three examples in the global economy where Quantative Easing (QE) has been a disaster.  First is Japan, which just a few short months ago, was hailed for its robust growth.  Japan has been the world's third largest economy, largely due to their adoption of QE protocol.  But their growth has been contracting; in fact, their Gross Domestic Product fell by an annualized 1.6% in the three months ending in June; the second quarter in a row.  Mr. Pento asserts that this latest contraction proves that massive money printing coupled with government spending does not lead to a path of sustainable growth, and Japan now appears to be headed towards a triple-dip recession.
The second example of failed QE policy is the foray of the European Union and the European Central Banks into this form of economic manipulation.  In fact, Mario Draghi, an Italian economist and current President of the European Central Bank, promised that he would do “whatever it takes” to bring growth to the flailing European Union.  Translation:  print money and buy debt.  That resulted in $67 billion a month in money printing, and the eurozone is still flat-lining. 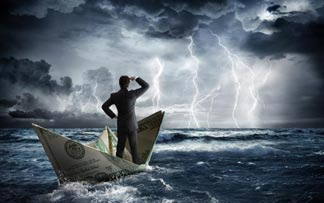 And, of course, there is our own horrendous $3.7 trillion of debt and Federal credit.  While I dispute that "the Great Recession has ended", no one can fail to see that any economic growth we have engendered has been anemic at best.  The Feds can tell us that we are at a steady 2% growth rate, but who is willing to buy that nonsense?  We all know that manufacturing in this country is nearly non-existent, and after almost 7 years of QE, resulting in sub-par economic growth, how is it that the S&P stock index still shows a 160% growth rate?
Mr. Pento gives us this plausible answer:  "Time has provided three clear and indisputable conclusions about QE: QE pumps stocks to levels that are completely disconnected from the underlying fundamentals of an economy. It allows bond prices to soar and yields to drop to levels the free market could never accept. And perhaps most importantly, QE does not lead to robust economic growth. This is because whatever unsustainable job growth there is comes from the building and servicing of asset bubbles, while it also encourages further unsustainable debt accumulations. The US oil fracking industry is a perfect example of this."
I can attest to that.  With plummeting oil prices, we here in Texas have seen a halt in the gas/oil exploration industry.  Companies accumulated huge debt through loans to buy the equipment to go get the gas, pipes to transport it, and trucks to haul it.  The Big Boys have stopped further exploration in an attempt to limit additional debt, and the small companies have halted production altogether.  But those sites that are still in operation need servicing.  So now, those who are still afloat are playing a game of survival --- trying to balance the servicing of the industry while keeping the associated debt at a minimum.  We have seen just how quick a pipeline can be installed, and have also witnessed just how quickly it can be shut off.
Now, those Central Bankers who endorse QE economics would like us to believe that things would have been worse without it ... instead of a Great Recession, we would still be suffering through another Great Depression.  But I think our economic expert explains the real truth about this failed policy:  "QE prevents the economy from truly healing because it keeps asset bubbles and debt levels from contracting. What you end up with are massive capital imbalances, increasingly unsustainable debt loads, and financial asset inflation that sits on top of a crumbling economic foundation."
Maybe I'm simplifying it too much, but it seems obvious to me that the Central Bankers, in collusion with the New World Order, wish to control the world's economy to their advantage.  We've all heard the rumors of the financial gains that the likes of George Soros and his cronies have made on currency collapses and other economic manipulations.  The bottom line seems to be that they are intent on collapsing any form of "free market".  But why should we be surprised ... anything that smacks of humanity's inherent freedoms is a threat to their domination.  But the evidence is there for all to see.  The QE-induced faith in the world's Central Banks, and their ability to save the world, has failed.
But the Bible has told us that the End Times would show us man's greed and the illusion of monetary success.  And we are warned that the opening of the Third Seal will be a time when people will have to work an entire day just to have enough money to purchase a loaf of bread (Revelation 6:5).  And there is a warning for the rich and powerful, too.  Those who have "lived on the earth in luxury and in self-indulgence" and accumulated wealth on the backs of the poor will have to answer to the Lord.
As Christians, we cannot bury our heads in the sand, dreaming of peace and safety.  The Bible makes it clear.  There will be hard days of famine and economic collapse before the coming of the Lord.  None of us can say how close we are to that day.  But even a casual observance of the economies of the world and our own stock market should have us considering that Biblical prophecy may soon be fulfilled.  Be observant, stay informed, get prepared, and be steadfast in your endurance, prepared to do the will of God in your life.