The Dual Identities of Margaret Sanger!

With great interest, I read of a fight in which a group of black Ministers are engaged with the Smithsonian Institute.  The Smithsonian Institution’s National Portrait Gallery has denied their request to have the bust of Planned Parenthood’s founder, Margaret Sanger, removed from the museum’s “Struggle for Justice exhibit.”
The Ministers are members of STAND, which is a non-profit organization that reaches across racial and cultural lines to bring people together around the foundational principles that made America great.  Part of their mission statement is to promote educational choice, and to strengthen families -- both of which Sanger and the organization she founded are sadly lacking. 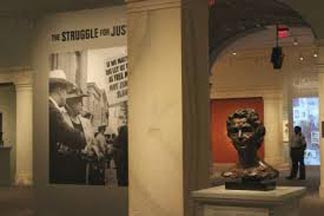 I must say that I agree with the minister's request that the Sanger bust be removed from any exhibit that suggests she believed in equal Justice.  Back in May of 2012, I wrote an exposé revealing many of the vile beliefs that Sanger espoused.  She was a firm believer in eugenics (controlled breeding to increase the occurrence of desirable heritable characteristics); sterilization and race purification (which, in effect called for the eradication of blacks and other minorities); and the elimination of "inferior" populations.  Why has no one ever questioned why Planned Parenthood facilities are mostly located in poor, black and minority neighborhoods?  Why has no one been able to see that abortion was the method most often suggested for helping disadvantaged mothers "plan their families"?
Finally the curtain has been pulled aside, and thanks to the brave work of principled filmmakers, the truth of PP's agenda has now been made public.  But how does the congressionally funded National Portrait Gallery respond when it is pointed out that Sanger's bust does not deserve to be displayed alongside portraits of Dr. Martin Luther King, Frederick Douglass, Thurgood Marshall, or Rosa Parks, to name just a few of the deserving honorees?  "There is no ‘moral test’ for people to be accepted into the National Portrait Gallery ... [Sanger's] association with the eugenics movement shadowed her achievements in sex education and contraception, making her a figure of controversy, one whose complexities and contradictions mirror her times," National Portrait Gallery director Kim Sajet told the pastors in a letter.  "“Sanger is included because, as founder of the American Birth Control League (which would later become Planned Parenthood), she strived to bring medical advice and affordable birth control to disadvantaged women at a time when even providing literature on women’s health infringed on ‘obscenity’ laws,” Sajet wrote. “Sanger wanted to give couples the ability to control the size of their families.”
No, actually, she wanted to give her organization the ability to control the size of their families -- by encouraging and promoting abortion.  If the goal was to provide women with sex education and the means to make educated decisions on the size of their families, why have there been 55 million babies aborted in this country?  Obviously her organization did a poor job in educating women on birth control, wouldn't you say?  Yet she still deserves to be honored as some kind of women's heroine and advocate?
Sure looks like it from these additional remarks by Sajet, the Gallery director:  "Removing those people from the Portrait Gallery who have been less than perfect would deprive future generations of valuable lessons concerning personal ambition and achievement on one hand, and human imperfection and fallibility on the other."  You've got to be kidding me!  "Less than perfect"?  Sanger was a monster!  "Personal Ambition and Achievement"?  If you call inspiring Hitler and Dr. Mengele with their plan for extinction of the Jews worthy of commendation, then I guess I would have to say that you have a distorted view of meritorious service to your fellow man!
Bishop E.W. Jackson, president and founder of Ministers Taking a Stand, told CNS News that the group of pastors would continue their fight to have Sanger removed from the museum and said Sajet’s letter avoided the issues his group had brought up. “If they must recognize her ‘historical significance,’ place her with busts of Pharaoh, Herod, Hitler, Stalin, Mao Zedong, Goebbels, Pol Pot and Dr. Mengele,” Jackson said. “This would put her in her proper historical context with the infamous and evil figures who committed genocide.”  Well said, Pastor!  And I will be praying for your success to remove the influence of this barbaric and demonically indoctrinated woman from our social conscious.