# Black Lives Matter; Unless It's A Fetus

How difficult it is for mankind to see the heart of this matter; and how easy it is for Satan to deceive us.  All he has to do is whisper, "Look!  Focus your attention over here ... don't think about how hypocritical you've been for the last forty-odd years."
We are all aware of increasing racial tension in this country since the Trayvon Martin killing five-and-a-half years ago.  Out of that racially-charged trial, as well as the Michael Brown trial, the "Black Lives Matter" movement was born.  Although this protest movement has, at times, become a vehicle for personal vendettas, it does have an "official" mission statement:  "the demand of freedom for Black bodies, justice for Black lives, safety for Black communities, and rights for Black people. We demand action, not words, from those who purport to stand with us."  Furthermore, its purpose is "to create, spark innovation, solidarity, and foster the practice of Black Love."
Now, there will be those who will tell me that I have no right to comment on this topic, since I am a white woman; that I have no life experiences that can identify with the black community or the perceived injustices they have incurred.  I agree, in part.  Yes, I have not experienced the disproportionate number of deaths (by race) in my community; nor have I encountered excessive prejudice from a figure of authority that does not share my race.
However, I am disappointed in the obvious disingenuousness of those that seek to lay the blame for all black deaths at the feet of another race.  I don't have to site statistics to convince you that gang murders contribute more to the deaths of young black men than the injustice of white police officers.  But where's the authentic and honest dialogue that will admit that the immoral welfare State has bred simmering hostility, leaving generations in bondage, and contributing to a criminal element that effects far too many law-abiding black communities?  These communities need protecting from the criminals, and who is it that is willing to provide that protection?  Don't you think that their presence and willingness to protect shows that "black lives matter" to these police officers, too?
But, I don't really wish to engage in a conversation about which race is right and which is wrong.  The truth is that all humans have the ability to discriminate against those different from themselves.  That's the sad, sinful part of our human nature.  Rather, I wish someone with a voice louder than mine would point out the need to re-focus the "black lives matter" movement to the aborted black babies whose lives matter, too. 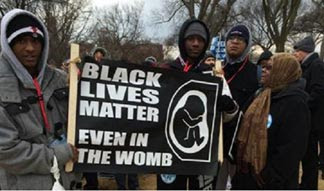 How can we, as a nation, scream and shout and protest that black lives matter, while ignoring the shocking numbers of black aborted babies?  Don't get me wrong!  All aborted lives matter!  But if you want to convince me that you care about saving black lives from oppression, cruelty, and tyranny, then show me that you recognize how abortion has contributed to far more deaths within the black race.
According to BlackGenocide.org, minority women constitute only about 13% of the female population (age 15-44) in the United States, but they underwent approximately 36% of the abortions. According to the Alan Guttmacher Institute, black women are more than 5 times as likely as white women to have an abortion; (by the way, the Guttmacher Institute is a non-profit organization which works to advance reproductive health through birth control, including abortion, so they have no reason to pad that statistic).
Another website, Abort73.com, provides the following statistics:  "Every day in America, an average of 3,315 human beings lose their lives to abortion.  Based on the percentage of the races in this country, that translates to between 683-829 of those babies being Hispanic; between 1,093-1,174 are white; and between 995-1,207 are black.  (BlackGenocide.org cites statistics that say the number is much higher; on average, 1876 black babies are aborted every day in the United States.)
Not only are black children being killed at a far greater percentage than white children, it's possible they're being killed in greater numbers, period. Is that not shocking?! Though the white population in the U.S. outnumbers the black population five to one, abortion may well be killing more black children each day than white children. "
Why isn't the Black Lives Matter movement focusing their attention on this fact, and on the preponderance of so-called "health clinics" in their neighborhoods, but which are, in reality abortion mills?  Has Satan completely blinded them to his schemes?  This movement claims they are fighting the belief that black lives have no value, and protesting the unnecessary loss of black lives in this country.
Yet, the incidence of abortion seems to indicate the very things they are demonstrating against ... abortion says that black lives have no value, and it causes the greatest and most significant loss of life. It has been estimated that since 1973 black women have had about 16 million abortions. Author Michael Novak, an American Catholic philosopher on culture, has calculated "Since the number of current living Blacks (in the U.S.) is 36 million, the missing 16 million represents an enormous loss, for without abortion, America's Black community would now number 52 million persons. It would be 36 percent larger than it is. Abortion has swept through the Black community like a scythe, cutting down every fourth member."
So, why can't they see that they have fallen for Satan's lies and committed the greatest loss of lives themselves?   But, I guess that is why Satan is so successful ... when he can tempt us with a false enemy, we fail to see his tactics, which are those of our true Enemy. 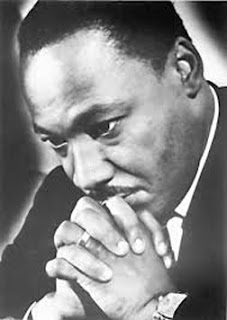 Sadly, the young black leaders do not listen to older, wiser, and Christ-centered voices like that of Alveda C. King, daughter of slain civil-rights leader A.D. King and niece of Martin Luther King, Jr., who quotes her uncle often when outlining her opposition of abortion. She writes:  [Martin Luther King, Jr.] once said, “The Negro cannot win as long as he is willing to sacrifice the lives of his children for comfort and safety.” How can the “Dream” survive if we murder the children? Every aborted baby is like a slave in the womb of his or her mother. The mother decides his or her fate.
Yet, the white population is not without sin in this deplorable practice.   We must face the truth that Satan has infiltrated our ranks, too.  How many of the abortionists in this country are white versus Hispanic or Black?  John Piper, who is a white pastor with a heart for racial justice, remarks on the disparity of abortion this way:  The main effect of putting abortion clinics in the urban centers is that the abortion of Hispanic and Black babies is more than double their percentage of the population. Every day [at least] 1,300 black babies are killed in America. Seven hundred Hispanic babies die every day from abortion. Call this what you will—when the slaughter has an ethnic face and the percentages are double that of the white community and the killers are almost all white, something is going on here that ought to make the lovers of racial equality and racial harmony wake up.
That might not be a popular sentiment, and it sure makes me wince at the accusation, but can we deny these words?  We, as a culture and society, must own our complicity.  And can the human race(s) bear to pull the beam out of their own eyes before accusing another?  Misguided members of the black race feel justified in killing innocent police officers out of some distorted sense of self-righteous pride.  It's all so tragic; and nothing gets solved.  Satan's strategy keeps us from loving each other and ourselves -- more babies die and the racial tension mounts.  Could the words of Matthew 24:12, be more true? .... And because lawlessness will abound, the love of many will grow cold.  God have mercy on us, and send your Son quickly!