And Jacob rose early in the morning and took the stone
he had put under his head, and he set it up for a pillar
(a monument to the vision in his dream),
and he poured oil on its top [in dedication].
And he named that place Bethel [the house of God]; 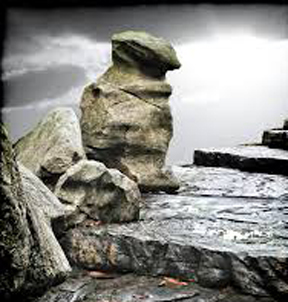 I am so blessed to be in the Word with several groups of fellow Christians who all desire to know  God's Truth and are willing to spend the time in diligent study.  Along with my Home Church group, I am closely joined with a Ladies Bible Study that meets weekly, and a more sincere group of godly women, you will not find.  We are currently studying The Patriarchs, an older study by popular Bible teacher, Beth Moore.
But what I love about the Word is that God's mercies "are new every morning", as it is stated in Lamentations 3:22-23… the Word is able to inspire with new revelations each time we open it and read it.  I am always amazed when something I thought I fully understood takes on new meaning and I can apply it to what I am seeing in the world.
Such was the case with the familiar verses I have chosen from Genesis.  At this particular juncture in Jacob's story we are usually fixated on the fascinating story of Jacob's dream of angels ascending and descending the ladder to Heaven.  Jacob rightfully discerns that the ladder is the gate to Heaven, and I just wish I could shout to him, "Jacob, turn the pages to John 1:51 and see just Who that ladder is!"  As Scripture shows us, Jesus reveals in John that when the gates of heaven are opened we will see "the angels of God ascending and descending upon the Son of man".  Christ is Jacob's ladder; Jesus is the connection and access to God!
Although Jacob might not have been able to put it into those exact words, he nevertheless, at the end of his dream, is overcome with the knowledge that the Lord had been in this place where he had lain his head upon a stone; and he instinctively knew how holy was this place.
As our Scripture tells us, Jacob got up the next morning and set up a stone as a pillar, or dedication, to the Lord, and called that place Bethel (the house of God).  At this time in Bible history, setting up pillars were memorials or symbols to momentous occasions when God presented Himself personally to individuals.  They were regarded as an honor towards God, as exemplified by the pouring of oil upon the top of the stone.
I just love the pictures that God paints for us!  In the ancient Middle East, oil was poured on the head of one who was anointed; one who had received the grace of the Holy Spirit; who was set apart as holy and sanctified.  When Jacob gave the place where he anointed the stone the name of Bethel, or house of God, we are getting a picture of the Temple, the holy place were God would reside, or as we know it in this modern age, the Church.  You can also see the picture of Christ building His church upon the rock.
But, in her teaching video, Beth Moore points out that this practice of dedicating pillars, or monuments, became corrupted when the Israelites followed the pagan practice of erecting memorials and pillars to their idols or false gods.  In fact, in Leviticus 26:1, God gives a direct command:  "You shall not make for yourselves idols, nor shall you set up for yourselves an image or a sacred pillar, nor shall you place a figured stone in your land to bow down to it; for I am the LORD your God."  What Jacob had rightly honored as a holy pillar had lost its sacred meaning, and these pillars had taken on the nature of the godless pagan culture.
In the simplest terms, what was once dedicated to God, had become, as the prophet Hosea renamed it, Beth Aven, meaning "House of Nothingness".  (Hosea 4:15 :  Though you, Israel, play the harlot and worship idols, let not Judah offend and become guilty; come not to Gilgal, neither go up to Beth-aven [contemptuous reference to Bethel, then noted for idolatry], nor swear [in idolatrous service, saying], As the Lord lives.
That revelation in the Beth Moore video stayed in my mind.  As I often do, I asked God in the early morning hours to reveal His truth to me; to show me more of who He is.  And perhaps because I was so interested in the concept of the corrupted house of God mentioned by Hosea, a sudden thought came into my consciousness.  Has today's house of God, the modern Church, become the "House of Nothingness"? Have we made the church building (like the ancient pillars) an idol that we worship?  In other words, has it become more important to say we are in church each Sunday, {i.e., in the building] than it is to experience the presence of God?  Sadly, I fear that this might be true; that God may no longer be in some of the church buildings across our land, as they strive to become one with the godless secular culture.
Of course, not every church can be painted with that broad brush.  In fact, I have witnessed many of the members of the church where I attend the Ladies Bible Study fulfill their Christian duties with love.  They have taken children into their home who needed mentoring and guidance.  And they are particularly faithful to take care of the widows of the congregation.  By no means are they a "House of Nothingness".  But of how many other houses of God can that be said?  How many swear that they are worshipping God, when in reality they are, as Hosea said, performing "idolatrous services"?  Now is the time for all houses of God to rededicate not only the house of worship, but themselves to serving the living God!
Posted by Pam Kohler at 7:00 AM