The Demise Of Womankind 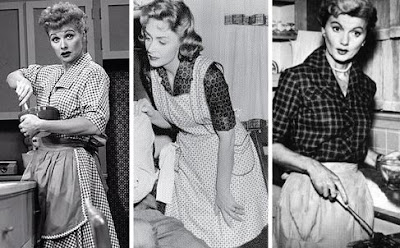 I have to admit it ... my generation is largely to blame for the state of confusion among Millennials of the female gender.  We were the Baby Boomer daughters who were often among the first of our family's women to attend college.  We grew up watching women role models on TV; like Lucille Ball, Donna Reed and June Cleaver, who were probably pretty close to the images of our own mothers -- happy in their roles as child-nurturers and support systems to their husbands.  There was something comforting about the TV personas of these domestic goddesses who were queens of their castles.
But then something happened.  Perhaps it was the seduction of being "on our own" in the world.  Suddenly, we stopped admiring the women that our mothers represented, and were lured to the celebrity of a new breed of women who told us that we shouldn't limit ourselves to the roles our mothers played.  They even called themselves by a powerful new title ... feminists.
In reality, they weren't the pioneers they proclaimed themselves to be.  They were actually the descendants of an earlier generation of women who focused mostly on equal voting rights and the rights to own property.  This second wave of feminism in the 1960s and 70s was actually a delayed reaction to the efforts to return women to their domestic roles after a brief release from those duties during WW II.  During the war years, women went to work in the factories to support the war effort, only to return to home-making when their husbands came home, and needed the jobs.
The likes of Gloria Steinem and the feminist movement reawakened the cause, and broadened the debate to a wide range of issues: sexuality, family, the workplace, reproductive rights, perceived inequalities, and official legal inequalities.  Suddenly, we young women looked upon our mothers' domestic roles as too traditional and quite frankly, unfashionable.
TV shows like Mary Tyler Moore glamorized the new "professional" woman; a woman who didn't need marriage and motherhood to fulfill her -- and didn't even need a man.  That mindset soon led to uncommitted sex and inconvenient pregnancies, which led to the "liberating" option of legal abortion.  And from those seemingly proud accomplishments, we have progressed to this moment in time and society ... we seem to have rejected our identities as women.
I feel sorry for the young women of this Millennial generation.  Who are their role models?  Who is the media and culture touting as representing them? Increasingly, they are the misguided and sad little puppets who are the result of the women's movement run amok.  They have not only bought the lies that motherhood, marriage (especially to a man), and home-making are a waste of their time; but they have taken the "I don't need a man to support me" principle to the furthest extremes ... and if they have a weak moment and their maternal instincts kick in, they don't need a man to produce a child; medical technology has solved that issue. 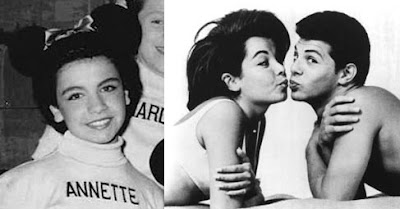 And what about love?  Well, men aren't needed in that department, either, these days.  In the 60s, Walt Disney Studios promoted a young, innocent girl named Annette Funicello, who grew into a beautiful young woman who wasn't afraid to embrace her femininity and attraction to young men.  At the turn of the century those same Walt Disney Studios were promoting the modern version of the cute, clever young girl in Miley Cyrus as Hannah Montana.  But something happened to Miley on her way to womanhood.  She lost what defined her as an attractive young woman and embraced the "anything for shock value" mode of self-promotion and identification. 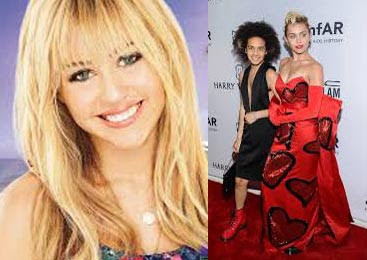 And she is the icon for a whole new platform among Hollywood women -- of all ages.  They are proud to declare the "gender fluid movement".  I'm not quite sure how to define it, but by the press that young stars like Miley Cyrus and Kristen Stewart are receiving, I can guess that it probably means they follow their base instincts and are free to choose to love anyone of any gender ... or no gender at all, such as Miley's "Agender date" to a recent gala supporting AIDS research.  But then Miley is proudly exhibiting armpit hair these days, and openly calling the Bible "a fairy tale", so let's just say that what she thinks doesn't have any relevance to me.
But that being said, I fear that she and the current movement to destroy the acceptance of the traditional man-woman relationship is gaining some steam.  It seems as if every new young starlet feels compelled to announce, as Miley did, "I never want to label myself. I am ready to love anyone that loves me for who I am. I am open."  But open to what??? To a delusion that loving a woman is the same as loving a man?  Open to some misguided belief that we must accept any and all relationships despite the fact that they are not natural?  How has loving a man suddenly become so taboo and intolerable?
It also seems that you can't watch a TV show, or go to the movies, or listen to a song without it promoting "the freedom" of young girls to pursue female sexual love.  Let's call it what it is ... Satan's seductive instrument called ... LUST!  It is unnatural and ultimately unfulfilling.
And how long before the young women of faith who enjoy the traditional male/female roles, and who denounce such sinful lifestyles, are ostracized and driven from the public square of debate?  The so-called "sexually enlightened" love to proclaim that "labels are outdated", and we should see each other as all equal and potential love partners.  I'm sorry, but I just can't go there!
You see, I don't want to blur the lines between the genders.  I love what makes me different from men, and I enjoy how we compliment each other and challenge each other through our differences.  I like that my husband wants to protect me and provide for me, and I like being in charge of making a comfortable home for him.  I also like that he values my opinions and that we pull together on this journey called life.  I like the security and commitment that comes with marriage.  I like that he knows what I'm thinking, even when I haven't said a word.  I can't say it any plainer than this ... I love how he appreciates me as a woman.
I have no desire to let my armpit hair grow, or deprive myself of his companionship and love, just to prove that I am equal and don't need him.  Does that sound rational, at all?  You see, I love the blessings that come from that label "woman".  And the fact that our society is desperately trying to eliminate all references to gender -- in effect, trying to become "genderless" -- is a sad commentary on our slide into degeneracy.
So, I believe it is inherent for us "mature Christian women" to show our young sisters in Christ that it is not only natural to embrace their female gender and their God-ordained role as partners to men; but they need to recognize that accepting any other definition of their role is willfully sinning against their Creator.  It's true that we may have been wrongfully seduced by the promises of feminism in our youth, but let's help this generation begin a new movement ... one that returns to Biblical definitions of marriage partners; honors and embraces the unique ways God made males and females different; and restores the beauty and dignity to what it means to be a woman.

Romans 1:25-28    " Because they exchanged the truth of God for a lie and worshiped and served the creature rather than the Creator ... For this reason God gave them over and abandoned them to vile affections and degrading passions. For their women exchanged their natural function for an unnatural and abnormal one ... And so, since they did not see fit to acknowledge God or approve of Him or consider Him worth the knowing, God gave them over to a base and condemned mind to do things not proper or decent but loathsome."