When God Is Removed From War

As I scanned the news stories across the Web, one particular headline caught my eye ... "Marine Court-Martialed For Refusing To Remove Bible Verse".  The absurdity of that statement made it obligatory that I click on the article.  And just as I suspected, the animosity against Christians in the military is growing out of all proportions to the alleged harm it is causing. 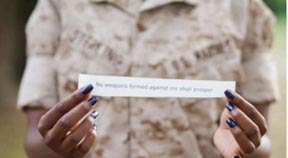 Lance Corporal (LCpl) Monifa Sterling is accused of displaying a verse of Scripture on her computer -- written on a scrap of paper -- that the military has determined “could easily be seen as contrary to good order and discipline.”   The verse?  Isaiah 54:17:   “No weapon formed against me shall prosper.”  When Lance Corporal Sterling refused to remove the verse, she was found guilty of failing to go to her appointed place of duty, disrespect toward a superior commissioned officer, and four specifications of disobeying the lawful order of a noncommissioned officer.  After representing herself at trial, the Christian Marine was ultimately given a bad conduct discharge and a reduction in rank from lance corporal to private.
Both lower court and the appellate court ruled that the Religious Freedom Restoration Act did not apply to her case because displaying a Bible verse does not constitute religious exercise.  The Liberty Institute and former U.S. Solicitor General Paul Clement, also a law professor at Georgetown University, are now representing Sterling.
First, let me say that this is not shocking to me in light of the fact that both God and our Constitution no longer merit any respect or consideration in how we run our national institutions.  This is apparent by the U.S. military policies that are being accelerated to allow the recruitment of as many illegal aliens as possible -- young men and women who have no emotional ties to America and no fundamental understanding of how our constitutional republic is supposed to function -- or the history of how faith in God played a huge part in the success of the military victories that established this nation.
But Lance Corporal Sterling obviously knows the connection between God and military victories. The words she taped to her computer screen are part of a longer verse in Isaiah 54 that reads, No weapon formed against you shall prosper, And every tongue which rises against you in judgment
You shall condemn. This is the heritage of the servants of the Lord, And their righteousness is from Me,” Says the LORD. 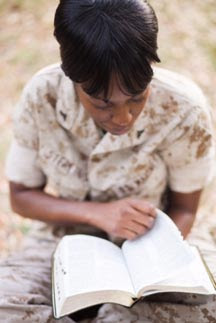 I'd like to think that LCpl Sterling knows that she is upholding a long tradition of warriors who know the name of Jehovah Nissi ... The Lord Is My Banner.  I'd like to think that she knows that this is the name of God that Moses disclosed to Joshua before he went into battle against the Amalekites.  As long as Moses raised the staff (banner) of God, Joshua and the Israelite army were assured victory.  Perhaps LCpl Sterling understands that this battle was all about God.  Joshua, Moses, Aaron, Hur, and the Israelite armies were simply vessels God used, but the battle itself was orchestrated by God. Moses knew this and wanted to make certain the Israelites knew it and remembered it. Nothing that he or they did in the physical realm brought about victory. God’s presence and power took them into the battle and assured the victory when the battle was done.
So what do the Marines and the Military Establishment find so darn offensive about Sterling believing that to be victorious in the military battles she will face, she cannot fight them in her own strength, but needs the Lord to go before her, just as He did with Joshua?  How is knowing that she needs the Lord in order to assure victory "contrary to good order and discipline"?  Or how can this understanding be seen as "divisive and contentious", which the Marines maintain?  As her Liberty Institute lawyer pointed out, “Our Marines are trained to deal with some of the most hostile people on the planet. I don’t think they are afraid of tiny words on a tiny piece of paper.”
For now, Sterling's name has been tarnished with the bad conduct discharge, and she is currently out of a job.  But perhaps the Lord has a bigger purpose for her.  Perhaps He chose this battle for her in order to show that He will go before her and win the battle; that she is His human instrument, just as Joshua and his men were.
I pray that the Lance Corporal will stand strong behind the banner of the Lord, and remain above the demands and accusations; being free from the crushing effects of this unjust sentence.  In the end, I hope she believes that she will be vindicated and triumph over her opposition.  The standing of every person of faith serving in the Armed Forces depends on it.  Without this victory in the Lord, God help our military and the defense of this nation.

Isaiah 50:8    "He who vindicates me is near. Who then will bring charges against me? Let us face each other! Who is my accuser? Let him confront me!"