I Grow Weary ... But My Spirit Is Strong! 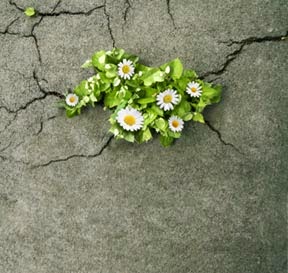 Like many of you, I look around and there is not much to lift my spirits.  I hardly recognize my country, or the world, for that matter.  I often feel as if I am the only sane person left.  I'm on the outside, looking in at the insane asylum!
Where I once felt a part of a community of people with common social values and responsibilities, I now find myself marginalized, along with those who reason as I do.  I haven't changed ... the world has!  So how am I (we) to cope?  What are our options?  Do we give in to the cultural war against moral conservatism?  Or do we continue to stand for our beliefs, strengthening those concepts against the rising tide of public opposition and antagonism?
Let's face it.  It appears as if we are on the losing side in the world's march towards libertine tendencies.  Everything from our politics, to the way we are educating our children, to how we entertain ourselves  -- the world is promoting sex without moral principles and responsibilities, while roundly rejecting accepted religious opinions.  What can I -- one person who expresses herself daily to a small readership -- possibly do to counter the trend towards normalizing immorality?  I don't really think that I am going to be able to change the steamroller that is crushing the foundations of righteous conduct, do I?
And I will admit that there are days that I feel the weight of trying to fight "the system" and the culture.  I want to retreat and shelter in the shadow of my God and ask Him to just cover me and my loved ones until this all rights itself, or until His Son comes to dispense His Judgment on the wicked ... either one will be fine; I am just tired of being confronted with all the negative headlines and seeing no way out.
Yet I know that I could never do that.  I am not the only person in the history of the world who was demoralized by what they saw happening around them.  All ancient civilizations have ended up at this point; they lost their moral compass and fractured internally, leaving them vulnerable to dangerous and lethal influences.  It's just my time and my turn.
So, back to the fundamental question ... what is our strategy to keep from being defeated?  I think we have to come to terms with the fact that we are facing an uphill battle.  Popular sentiment is against us; the courts are certainly against us; and our Churches are not providing much leadership or guidance.  It is up to each and every one of us to strengthen ourselves through the promises that we have been given by our Savior.  We must realize that this life is temporary and our future in this world is compromised at best.
And if you count yourself as a follower of Jesus, as I do, then why are we surprised, and what do we actually hope to accomplish?  In my mind, it is futile to think we can change things.  Our Holy Book, the Bible, tells us how this is going to play out, and that we are not the winners -- at least as far as this life defines winning.  But Victory is still ours!  And, as the Apostle Paul said, [we are to] "press on toward the goal to win the [supreme and heavenly] prize to which God in Christ Jesus is calling us upward."  You see, it really is "onward and upward" ... and we must stay in the fight, if for no other reason than to encourage fellow Christians who are fearful; or to point the way to the Savior for the blind, the sick of heart, and the lost.  If I can play a part in snatching one soul out of the clutches of Satan, then whatever the future in this world has in store for me will be time and energy well-spent.  I may be weary, but I'm not defeated!

Isaiah 40:29    "He gives power to the faint and weary, and to him who has no might He increases strength [causing it to multiply and making it to abound]."