Forecast For Our Future?

Modern culture has been enthralled with the dystopian writings of Aldous Huxley and George Orwell since their famous novels, Brave New World and 1984, appeared on the scene. Written in 1931 and 1949, respectively, both are tales of a world run by totalitarian governments, and where the life experience of the individual is limited and controlled.
At the center of Brave New World is the World State, a unified government which administers the lives of every person on the planet.  There is no individuality or encouragement to succeed on your own.  Even human reproduction is controlled and embryos are raised artificially in "hatcheries and conditioning centers".  When born, every person is assigned to one of five social classes.  Children are educated with appropriate subconscious messages to mold the child's self-image to that appropriate for his class.  Critical thinking is discouraged, and books are banned. 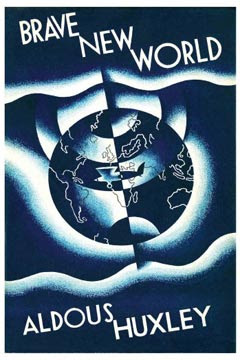 The experience of the individual can be summed up as follows:  Emotional, romantic relationships are obsolete; chastity and fidelity are cause for disapproval or mockery; and marriage, natural birth, parenthood, and pregnancy are considered too vulgar to be mentioned in polite conversation. Spiritual needs are met by mock religious services in which twelve people consume an hallucinogenic drug, called soma, and sing hymns. The ritual progresses through group hypnosis and climaxes in a sex orgy. The symbol worshiped is the "T", in homage to Henry Ford who had recently introduced mass-production of automobiles with the Model T.
People enjoy perfect health and youthfulness until they die at age 60.  Death is not feared; the population is confident that everyone is happy, and since there are no families, there are no strong ties to mourn.  The vast majority of the population lives under the World State. In geographic areas not conducive to its system, "savages" are left to their own devices. These "savage reservations" are similar to reservations established for the Native American population during the colonization of North America.
The rest of the novel delves into the dark story of how one of the "savages" longs to explore society among the World Controllers, only to discover that its comforts, technological wonders, and consumerism are poor substitutes for the individual freedom, human dignity and personal integrity that was part of his experience on "the reservation".  He then ostracizes himself from society and attempts to purify himself of "sin" (desire), which ultimately leads to a lonely ending.
I've given you this synopsis of the popular novel to show how far we've come towards fulfilling this fantasy novel in the nearly 100 years since it was published.  And, ironically, as I've pointed out several times in the past -- Hollywood has a way of also showing us what our future holds.  So it should come as no surprise that one of the elites of Tinseltown will be bringing Brave New World into your living rooms very soon.
That's right, the Syfy channel, and none other than Stephen Spielberg, are working together on a TV series adaptation of Brave New World.  Most people will just remember the novel for it's bizarre and, frankly, frightening depiction of the future of human society.  But like many "geniuses" in their fields (such as Nikolai Tesla), Aldous Huxley was interested in spiritual subjects such as parapsychology and philosophical mysticism, or the "extraordinary experiences and states of [the] mind."  Could his experiences with psychedelic drugs have opened him up to influences by spirits not of this world?  Is this where he received his vision of a Brave New World?  And was he simply forecasting Satan's plan for humankind, and now we will be shown in graphic detail on our TV screens just what lies in store for us?
It will be interesting to see how Spielberg approaches the presentation of the World State, and such subjects as overpopulation, the effects of drugs, subliminal suggestion, and totalitarianism -- all themes within the original novel.  And it will be interesting to see how many unsuspecting TV watchers will be easily deceived; consumed with the entertainment value of the latest apocalyptic show, never realizing that they could be watching themselves in the very near future.

Revelation 17:13   "These are of one mind, and they hand over their power and authority to the beast."
Posted by Pam Kohler at 7:00 AM