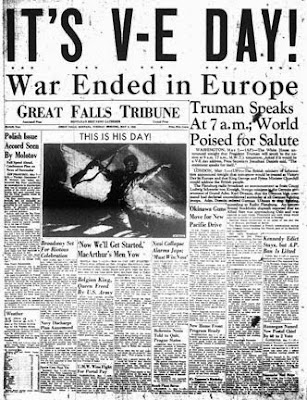 This past Friday marked the celebration of Victory in Europe (V.E.) Day; the day that marked the formal acceptance by the Allies of World War II of Nazi Germany's unconditional surrender of its armed forces.  In effect, it marked the end of World War II in Europe.  Massive celebrations took place in Europe and the United States, as well as Russia.  It marked an end to the evil that permeated the Nazi regime; a Satanically-influenced ideology that few recognized until it was too late.
There are very few military veterans who remember that day 70 years ago, and I fear that through our lack of knowledge about Satan's game plan, we are experiencing a reoccurrence of his strategy.  As I read the history of that time period and how quickly Satan, through Adolph Hitler, was able to corrupt the culture and the church, I am amazed at the similarities with the world events of today.
In 1933, the spirit of National Socialism and nationalistic pride saw Germans participating in a "purge" of un-German thoughts of authors such as Helen Keller, Jack London, H.G. Wells, and Albert Einstein.  Hundreds of thousands of books were burned in a bonfire, symbolizing that the "age of arrogant Jewish intellectualism" was now at an end.  The vampire-like Minister of Propaganda for the  Nazi Party, Joseph Goebbels, ranted, "[We are] consigning to the flames the unclean spirit of the past.  This is a great, powerful, and symbolic act ... Out of these ashes the phoenix of a new age will arise!"
Many of you will recognize the symbology of that statement.  Hitler, whom I believe embodied the spirit of the Anti-Christ, knew that to promote his ideology and plan, he must marginalize the Christian Church.  Albert Speer, who was one of Hitler's chief architects, quotes the Fuhrer as saying, "It's been our misfortune to have the wrong religion.  Why didn't we have the religion of the Japanese, who regard sacrifice for the Fatherland as the highest good?  The Mohammedan religion, too, would have been much more compatible to us than Christianity.  Why did it have to be Christianity with its meekness and flabbiness?"  (Apparently, Satan agrees with Hitler -- Who can argue that the radical Islamic jihadists are not compatible with Satan's plan to control the world?)
Furthermore, Hitler disdained members of the clergy, with their "child-like faith" and lack of trust in science.  It was his opinion that "A church that does not keep step with modern scientific knowledge is doomed. It may take quite a while, but it is bound finally to happen."  Such a church was not useful to the National Socialist ideology, which preached "ruthlessness and strength".  The Church would have to change to fit both Hitler's and Satan's diabolical plans. 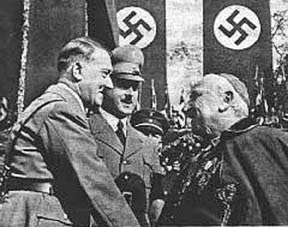 Satan's plan involved increasing the pressure against Christianity, which fit in well with the goals of the Third Reich, who wanted to replace it with a religion of their own invention.  The plan was to "eventually destroy Christianity, if it [the Reich] could, and substitute the old paganism of the early tribal Germanic gods and the new paganism of the Nazi extremists."  In the end, Nazism eventually became a religion unto itself, and their leaders were its priesthood.  This "new religion" relied heavily on the occult and astronomy, and would go so far as to force the removal of the Christian Cross from the cultural foundations of the nation.  Christian Scripture would be twisted and bent, and the doctrines of the church altered to fit the Nazi/Satan agenda.  Sounds familiar, doesn't it?
And what was the German Church's response?  For the most part ... compromise and appeasement.  And so it is today .... Satan is simply running the same old game plan.  As my wise husband commented on the anniversary of V.E. Day, "It has only taken 70 years for Satan's minions to re-establish his agenda."  Just consider the following:  Today, there is virtually no response by the Church to radical jihadist rhetoric declaring their intent to wipe out Christianity and Judaism.  Furthermore, the attempts to remove the Cross as an expression of our religion and faith are becoming far too commonplace.  And the validity of Scripture is now being amended to fit the unbiblical standards of society, if not outright denied!
Far too many American churches have abandoned pure Christianity for a conciliatory approach that embraces the culture.  Our youth are abandoning their Christian roots for Middle Eastern mysticism, pagan-inspired rituals, and participation in the occult.
In 1933, Hitler released a statement that promoted "the friendly relations existing between the Holy See and the German Reich", which succeeded in mollifying a skeptical and suspicious world.  Today, we see Pope Francis inviting representatives of the Islamic faith to the Vatican, and openly instituting Islamic prayer in the Catholic palace.
Satan and those he inspires know that to move forward with their anti-God schemes and strategies, they must destroy the Church and Christianity.  If they can transform or redefine the intentions of Christ's Body, then Satan thinks he can defeat his enemy.  We see that happening as Biblical "social justice" is redefined to fit Satan's motives to divide and conquer us by making such justice political and sociocultural.  It's all about moving us away from individual obedience to the principles of the Bible and Jesus's teachings, and towards a "collective" and compliant mindset.  It's about subtly removing the line of distinction between the Church and the State, and allowing the State to exercise control over the Church. Isn't that exactly what Hitler and the Nazi party tried to accomplish?  Haven't we seen that as the Supreme Court decides whether we Christians must legally accept abortion and same-sex marriage?
So, while it has literally been a lifetime of 70 years since Satan's most egregious plan of the last century was defeated, the embers of hate towards Christianity have never really been extinguished.  There are just new names and faces, but the tactics remain the same ... manipulate and exploit an accommodating Church in order to dominate the people and force them down Satan's path.  Unless the Church rediscovers who it is in Christ Jesus, then I fear that the next round of Evil will bring unfathomable desolation and anguish upon mankind.  It is at the door this moment ... what will be our response?

Thank you to the writings and research of author Eric Metaxas for the details on Hitler and Third Reich.

2 Corinthians 11:15    "So it is no surprise if his servants, also, disguise themselves as servants of righteousness. Their end will correspond to their deeds."