Is This Another Warning?

If you will recall, back in July of 2012, I wrote a post titled America and Israel: Destinies Intertwined, in which I highlighted natural and political disasters that have come upon our land after our nation's leaders negotiated deals that harmed Israel.  As that post chronicled, we have suffered major hurricanes, earthquakes, tornadoes, and economic woes after pressuring Israel to give up land for a Palestinian state.
Now, here we are negotiating with Iran; the biggest proponent of state-sponsored terrorism against Israel. Even if you are shy about giving full credence to Wikipedia you cannot ignore their description of Iran:  "Since the declaration of the Islamic Republic of Iran in 1979, the government of Iran has been accused by the USA of funding, providing equipment, weapons, training and giving sanctuary to terrorists."  Our own State Department has called them "an active state sponsor of terrorism"; and former Secretary of State Condoleezza Rice called them "a kind of central banker for terrorism ... through Hezbollah in the Middle East."  And need I remind you that Hezbollah is desperately trying to perfect their missile delivery systems to destroy Israel.
Now, here we are in the Spring of 2015.  The United States is desperate to claim victory in a battle of the wills with Iran over their nuclear program.  Deadlines have been pushed back, with Iran stalling for more time to gain their objective ... a nuclear bomb to deploy against Israel.  And we seem to be doing everything we can to accommodate them.
So, it came as no surprise to me that just hours before our nation announced that "we have achieved the framework for that deal", there is a 4.0 magnitude earthquake along a portion of the New Madrid Fault.  Was this a warning sign from God, indicating that He is ready to judge us with the mega-disaster that has been predicted for years now?  Is He telling us not to finalize this deal with Iran; a deal that will certainly put Israel in the crosshairs of a nuclear bomb? 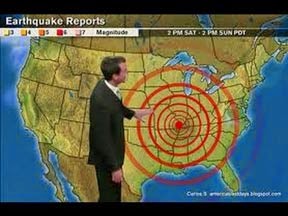 In case you are unfamiliar with the New Madrid Fault, it is a MAJOR seismic zone and a prolific source of intraplate earthquakes (earthquakes within a tectonic plate) in the southern and midwestern United States, stretching to the southwest from New Madrid, Missouri.
There have been recorded earthquakes along the New Madrid Fault Line since 1699, when a French missionary reported the ground shaking.  The strongest earthquakes (in the 7.0 - 8.0 magnitude range) were felt in the early 1800s, when the fault created temporary waterfalls on the Mississippi River, created a wave that propagated upstream, and earthquakes were felt as far away as New York City and Boston, where ground motion caused church bells to ring.  A series of aftershocks were felt for several years, up to 1817.  Then in 1843 and 1985, the area experienced earthquakes of 6.0 and 6.6, respectively.
The biggest earthquake in the modern era was a 5.4 in 1968, and the effects were felt in 23 states.  Only minor rumblings have been felt in the last 47 years .... until Wednesday night, just hours before the proud announcement of an Iran "semi-deal".  Why all the concern over a relatively minor 4.0 earthquake?  Because, for starters, the reports by the Federal Emergency Management Agency (FEMA) estimates damage and injuries in St. Louis from a 7.6 magnitude New Madrid earthquake to be $2.8 billion, 260 deaths and 1,060 serious injuries.  The 1812 earthquake resulted in about 3.5 million acres damaged or destroyed by landslides, fissures, sandblows, lateral spreads, subsidence, submergence and uplift. And remember that this area of our country is prime agricultural and cattle land, and a major earthquake would certainly affect our food production.
Then there is the report by the Missouri Department of Natural Resources that says earthquakes in this region shake and damage an area approximately 20 times larger than earthquakes in California and most other active seismic areas.  They also state that the New Madrid Seismic Zone appears to be about 30 years overdue for a magnitude 6.3 quake, and about 75% of the estimated recurrence time for a magnitude 7.6 earthquake has elapsed since the last quake of this size occurred in 1812.
When you realize that our other national foreign policy decisions which adversely affected Israel corresponded with the 1991 "Perfect Storm"; Hurricane Andrew; the Northridge, CA earthquake; the 1998 Texas floods; the 1999 Super Tornado; and Hurricane Katrina; then you can imagine that a massive New Madrid earthquake will fit the bill as an appropriate judgment against our latest negotiations with Iran.
The central United States experienced a 4.0 earthquake at the announcement that "a framework" had been negotiated.  Don't you think God is trying to give us a warning not to complete these negotiations with the devil?  I do not believe this is "mere coincidence" and I greatly fear the loss of life and property, and what a major earthquake in this area will do to our economy.  But more than that I fear the retribution that will be rightly ours should this nation enable Iran to carry out its threats against Israel.  Pray that our leaders will have a change of heart and bless Israel, rather than curse her!