It is true that the world continues to be horrified by the barbaric crimes against humanity being committed by ISIS in the name of the Islamic Caliphate.  Who can fathom the hatred and wickedness that is behind the beheadings, the torture, the raping of children, genocide against entire Christian villages, and destruction of ancient historical sites?  Northern Iraq has been overrun by Evil, and the world watches in horror.
Yet, from my Biblical worldview, this is not the first time this area of the world has seen such wickedness.  I have alluded to the significance of ISIS's stronghold near the ancient city of Nineveh in a previous post.  But there is much more to the story ... there is actually a connection between what is going on today in Iraq, and a prophecy in the ancient Biblical Book of Nahum.
In just three short chapters, the prophet Nahum prophecies about the Judgment-to-come upon Nineveh, the vengeance of the Lord, and the defeat of the wicked.  Since it is speculated that Nahum wrote his prophecy somewhere around the mid-600s B.C., could it have any relevance for us today? 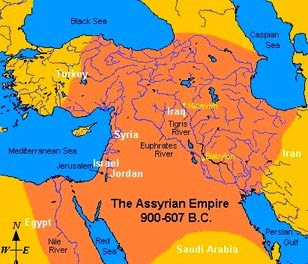 First, I want to thank David Ettinger, copy editor for Zion's Hope Ministries, for his scholarly research on the prophet Nahum and the ancient Assyrian Empire.  Through his writing, I discovered that ancient Nineveh was the capital of the Assyrian Empire, "one of the most cruel, vile, powerful, and brutal nations that ever existed."  If you are a student of Biblical history, then you know that it was Assyria that defeated the Northern Kingdom of Israel in 722 BC, took them into captivity, and exiled and dispersed them from their land.
Just how evil was the ancient Assyrian Empire?  Here, in their own words, are examples of the crimes they committed against humanity (Details are graphic, so please be forewarned):
•  King Ashurnasirpal II (883-859 BC):  "I stormed the mountain peaks and took them.  In the midst of the mighty mountain I slaughtered them; with their blood I dyed their mountain red like wool... The heads of their warriors I cut off, and I formed them into a pillar over and against their city; their young men and their maidens I burned alive in the fire." (Luckenbill, Ancient Records of Assyria and Babylonia, 1:148).
•  King Ashurnasirpal again, telling of a captured enemy leader:  "I flayed [him], his skin I spread upon the wall of the city..." (ibid, 1:146).
•  King Sennacherib (705-681 BC):  "I cut their throats like lambs.  I cut off their precious lives [as one cuts] a string.  Like many waters of a storm I made [the contents of] their gullets and entrails run down upon the wide earth ... Their hands I cut off." (ibid, 2:127)
•  King Shalamaneser II ( 859-824 B.C.):  "A pyramid of heads I reared in front of his city.  Their youths and their maidens I burnt up in the flames." (ibid, 1:213).
•  King Ashurbanipal (669-626 B.C.):  "I pierced his chin with my keen hand dagger.  Through his jaw ... I passed a rope, put a dog chain upon him and made him occupy ... a kennel." (Ibid, 2:310).
Now, unless you think that these accounts are all ancient history (which they are), I implore you to realize that this same area today is seeing the same wretchedness and evil practices of these historic kings.  The actions of ISIS are no less an abomination.  Plus, the ancient city of Nineveh is near modern-day Mosul, which is occupied by ISIS fighters; and ancient Assyria is now the nations of Syria, parts of Iran, Iraq and modern day Turkey.
It is important, when considering the prophecies of Nahum, that we understand that Nineveh had been given the privilege of knowing the one true God through the preaching of Jonah (refer to my previous post).  This great and powerful city had repented of their evil ways, and God had graciously stayed His judgment.  But it wasn't long before the Assyrians forgot their revival and returned to their habits of violence, idolatry, and arrogance.
A few years later, Nahum would write that the God of Israel will inflict "brutal (and much warranted) judgment upon the detestably wicked heathens."  Here are his very words in Chapter 1, concerning the oracle of Nineveh, the capital city of Assyria: "The Lord is a jealous God and avenging; the Lord avenges and He is full of wrath. The Lord takes vengeance on His adversaries and reserves wrath for His enemies."  Nahum's prophecy regarding God's judgment would be fulfilled in 612 B.C., when the Babylonian Empire would completely destroy the city.  As I noted in my post of July 10, 2014, "the ancient Nineveh's location is marked by excavations of five gates, parts of walls on four sides, and two large mounds. These ruins are across the river from the modern-day major city of Mosul, in the Nineveh Governorate of Iraq."
So, we can see that God made good on His prophecy through the prophet Nahum.  But is this prophecy limited to a one-time fulfillment?  Is not our God, Immutable and Never-Changing?  The atrocities and evil that occurred in ancient Assyria are the same as what is being committed by ISIS in Iraq and Syria, the modern-day counterparts of ancient Assyria.  What makes us think that God will deal with them any differently?
This idea might not be popular among the factions of Christianity that only see God as loving, full of Grace, and compassionate.  He IS all of that!  But He is also a holy and righteous God , a "consuming fire" (Deuteronomy 4:24), and He will not allow such evil to reign unrestrained.  His justice was not limited to Old Testament judgment and retribution.  His justice demands that He take vengeance against evil and punish wickedness -- whether it occurs in 650 B.C. or 2015 A.D.
The fact that ISIS and their radical ideology have made Christians a focal point of their murderous ways will not be lost on God.  God will punish blatant, cruel, and persistent sin, and the wicked will not escape their due.
But we, in the West and America, must look to our own apostasy.  Like ancient Nineveh, we have known the one true God, but are rapidly descending into moral depravity.  We may not have committed the vile acts of brutality that Assyria or ISIS have done, but we have been blatant and persistent in our sin, without repentance.  While our nation has not enjoyed its powerful status as long as ancient Assyria, we have nonetheless been recipients of His blessings ... as long as we remained faithful to Him.  But I cannot help feeling that as America and the West have withdrawn from God, He is withdrawing from us, and leaving us to our own devices.
Should we not take a lesson from the ancient Ninevites and Assyrians?  We know that God can turn His wrath aside if we repent and seek His forgiveness and blessings.  What will history record about us?  How will God deal with us versus the evil perpetrators of ISIS?  We would be wise to study the ancient prophets and listen to the enduring Word of the Lord.

Nahum 3:19    "There is no healing of your hurt; your wound is grievous. All who hear the news about you clap their hands over [what has happened to] you. For upon whom has not your [unceasing] evil come continually?"