A Consuming Fire: The Tale of Two Religions 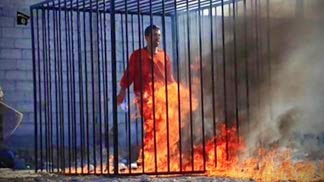 The world is haunted by the video released by ISIS.  A captured Jordanian pilot was subjected to the barbaric act of setting a man on fire and then crushing his body with a bulldozer, along with the cage in which he was held.  It all seems so incomprehensible.  That is, unless you look at this horrific act through the lens of world history and religions.
What I think we are seeing with this horrific act is the use of fire as a symbol of destroying or eradicating the enemy of ISIS, as well as purifying what they perceive as a disobedient Muslim.  Remember the pilot shared the same faith.  But he is not the only one who has felt the deadly flames of fire in the Islamic world.  The following report comes to us from Front Page Mag:
"Hundreds of women in the Muslim world have been murdered by fire in honor killings. The murders were often disguised as suicides or accidents. In the first six months of 2007, in Iraqi Kurdistan, 255 women were killed, three-quarters of them by burning. An earlier report cited 366 cases of women who were the victims of so called fire accidents in Dohuk in 2006, up from 289 the year before. In Irbil, there were 576 burn cases since 2003, resulting in 358 deaths. In 2006 in Sulaimaniyah, Iraq there were 400 cases of women burned. In Tunisia in May 2014 a father burned his 13-year-old daughter to death for walking home with a boy. In October 2013 a 15-year-old Yemeni girl was burned to death by her father for communicating with her fiancé. In March 2009, a sixteen-year-old Muslim girl, suspected of having a relationship with a boy, was burned to death by four male neighbors in her village in Ghaziabad, North India.  But this form of punishment is not reserved just for women ... In April 2011 three men were set on fire in Iraq for being gay. A video of that incident is easily accessible online. In June 2008, the Taliban burned three truck drivers of the Turi tribe alive for supplying the Pakistan Armed Forces. There have been numerous reports of Christians burned alive by Islamist jihadists. In November 2014 a Christian couple in Pakistan Sajjad Maseeh, 27, and his wife Shama Bibi, 24, were burned alive in a brick furnace after it was rumored that they had burned verses from the Quran. 'Bibi, a mother of four who was four months pregnant, was wearing an outfit that initially didn’t burn…… The mob removed her from over the kiln and wrapped her up in cotton to make sure the garments would be set alight.' These incidents are rarely reported by the mainstream media and were difficult for most people to comprehend as real until ISIS started filming documentaries of their ritual murders."
Did you notice the operative word in that last sentence?  It is RITUAL.  Fire and Ritual are an important part of all world religions; even our own Christianity.  The Lord God Jehovah even appeared as a blazing fire in the midst of a bush!  In this case, Fire communicates the very presence of God.  The first Believers were baptized with the Holy Spirit as tongues of fire rested upon their heads.  This is our God at work. 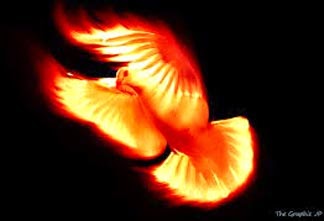 In fact, YHWH uses fire for many purposes in His redemptive work.  He uses fire as a defense for His divine love and protection; a covering, if you will (Isaiah 4:5).  He uses fire as a means to make amends (or atonement) for sins (Leviticus 16:27).  Our faith tells us that God will use fire as a means of transforming the earth in the Great Day of the Lord (2 Peter 3:10).  But perhaps the most identifiable attribute of God to us Christians, is its purification aspect.  We will all be subjected to the "Refiner's fire" when we stand before God to measure our efforts on behalf of His kingdom. (1 Peter 1:7).  Each of these applications of fire is a picture of God's mercy; of how much He loves us.
But I'm sure that the members of ISIS would say they use fire to purify their religion, too.  But there is one huge difference:  They use fire as a form of retribution, punishment and revenge for those they decide have been disobedient.  Where is the restoration of the individual?  YHWH uses fire to sustain the lives of those who follow Him; purifying them even as the fire dissolves their sins and rebellion.  The end result is a new life; a renewed spirit of allegiance to the God who created them.
But as Front Page Mag points out, the ritual burning of the Jordanian pilot does not purify the faith of Islam.  Instead it "symbolically unleashes an epidemic of contagious evil ... Ritualizing the violence justifies it and makes it sacred."  And now comes the report from the the U.N. Committee on the Rights of the Child, who said it has received reports regarding ISIS and "several cases of mass executions of boys, as well as reports of beheadings, crucifixions of children and burying children alive." Where is the honor in this?  How does this serve to glorify their religion or their god?
So, as I see it, here's the bottom line ... the goal of ISIS appears to be to take over the Islamic religion and "purge it" of its "unclean" members. But what is the final outcome?  We see death, destruction, fear, and utter ruin.  Christianity, on the other hand, also acknowledges the need of its members to be "purified" or "cleansed".  But the goal of the consuming fire of our faith is to renew a life and make it new; it is the sin that is destroyed, not the flesh and blood person.
Those far smarter than I, have stated that the video of the Jordanian pilot's murder was sent around the world as a symbol of an Islamic purification ritual that serves vengeance, and restores honor and purity to the community of believers.  The difference is, my faith preaches love among its fellow members; and honors and glorifies our God, rather than the community of believers; and ultimately, leaves vengeance to the Almighty God of the Universe.
At the heart of the matter is this:  two consuming fires; two religions with vastly different interpretations; and only one that treasures each created life.  We are to pray for those who wish to persecute us.  As hard as that may seem in the face of such inhumanity, I suggest we put that at the top of our priority list.

Matthew 5:44-45     "But I tell you, Love your enemies and pray for those who persecute you, To show that you are the children of your Father Who is in heaven; for He makes His sun rise on the wicked and on the good, and makes the rain fall upon the upright and the wrongdoers [alike]."