The Hope Is There If You Look For It

It is getting difficult to write about anything that doesn't pertain to my hope in Christ.  The accumulation of wealth, or status, or social benefits that we in the West so desire, will amount to nothing in the end.  Only our faith can provide protection from this hostile world, and events are certainly showing us that Evil is launching an offensive against those who dare to stand up to it.  Whether it is people who espouse the principle of free expression; or followers of Jesus Christ who dare to proclaim their faith, we must all face the fact that darkness is upon us. 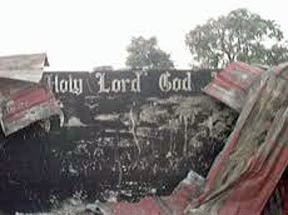 The recent attacks in France and the persecution of Christians across the Middle East and Africa are enough to make us all uneasy.  An organization called Open Doors, reports that each month, there are 322 Christians killed for their faith, 214 Christian churches and properties are destroyed, and 772 forms of violence are committed against Christians (including beatings, abductions, rapes, arrests, and forced marriages).  Just because they occur in far-off places like India, Iraq, Iran, Libya, Syria, or Nigeria does not mean we can dismiss them.  If one part of the Body of Christ is suffering, then the whole body is affected.
And, yes, it is both frightening and depressing to dwell on these statistics.  It may seem as if God is distant and no longer making His presence known to His children.  But if we pay attention, He is there in the smallest of details, and in the seemingly insignificant moments.  This happened to me, just in the last 24 hours.  Last evening, PLW and I decided to watch a movie; something to take our focus off ourselves.  We decided on The Good Lie, a movie that intrigued us because of its story about some Lost Boys from Sudan, who were relocated to America.  If you are unfamiliar with who these boys are, the official description of them is "the groups of over 20,000 boys of the Nuer and Dinka ethnic groups who were displaced and/or orphaned during the Second Sudanese Civil War (1983–2005); about 2.5 million were killed and millions were displaced."
The movie showed not only the horrific marches these children made across a thousand miles of Sudanese deserts to reach, first Ethiopia (but the soldiers were there) and then the refugee camps in Kenya, only to survive amid abysmal conditions.  The movie also touched on the reality that many were forced to become child soldiers and take part in the genocide of their own countrymen.  You're probably asking, "So, where is the hope in this tragedy?"
The first surprise and hint of promise came in the names of the primary characters.  The characters are fictional, but their names have meaning.  Theo and his brother Mamere, were accompanied by Daniel, Jeremiah, Paul, and their "sister", Abital.  Mind you, they were not all related, but they became a family through the shared experience of their flight from genocide, the thirteen years of near hopeless existence in the refugee camps, and their ultimate relocation to America. 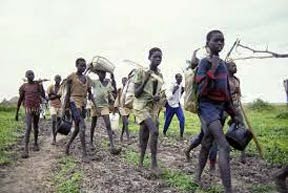 Several of the actors in the movie had been former Sudanese refugees; some having been forcibly recruited as child soldiers; this lent credibility and emotion to the movie.  But I was most moved by the characters' knowledge of the Bible and their familiarity with Scripture.  There is even a scene where they are shown struggling during the hundreds of miles they walked to reach the refugee camp; with one of the children clutching what looks like a Gideon Bible.  Their understanding and comprehension of the Scripture they quoted made my heart sing!  Mind you, these were children who had lived in primitive villages, were cattle herders with no modern conveniences; yet, they had heard God's Word and it had pierced their hearts.
I was intrigued by the fact that three of the "brothers" were named after three of God's mightiest prophets, and this actually brought tears to my eyes.  The story of their love for each other, and the sister they become separated from in America, is at the heart of the movie.  And so is their simple, child-like faith and obedience to the life God has called them to.
I received an extra bonus this morning during my time of Bible study.  As I studied the early years of King David, I noted the names of his sons, born to his various wives.  The name of the wife who bore him his fifth son, was Abital, the same name given to the sister in the movie, and just one more connection to God from this inspirational film.
I know it may seem "worldly" to put so much emphasis on a movie, but God speaks into this earthly realm in a variety of ways to remind us that He is around us, and in us, and with us. The plight of the Lost Boys of Sudan was real, and so is the faith that has carried so many Christians in that part of the world.  Unfortunately, Open Doors reports on their website that "the year 2014 will go down in history for having the highest level of global persecution of Christians in the modern era ... and current conditions suggest the worst is yet to come.  Africa saw the most rapid growth of persecution, while the Middle East saw targeted attacks, resulting in a mass exodus of Christians."
But we must cling to the hope that comes to us in the news that 13 kidnapped Coptic Christians were released in Libya this week, and that between 30-40% of recent Indian converts to Christianity have signed their names to a petition to re-affirm their decision for Christ, and to seek police protection from intimidation by fundamentalist Hindu groups.  While Boko Haram increases their assaults on Christian villages in Nigeria, the faithful in that ravaged country refuse to deny their Savior.  These are very real examples of God fortifying the faith of the Body of Christ.  Their example should fortify us and give us hope; that when it comes our turn, we will be able to stand as courageously and faithfully as our Christian brethren.  Pray earnestly for them and praise God for the gifts of His presence in our lives!

Psalm 27:3    "Though an army besiege me, my heart will not fear; though war break out against me, even then I will be confident."

Email ThisBlogThis!Share to TwitterShare to FacebookShare to Pinterest
Labels: Persecution