Witnessing Death ... And The Blessed Hope

I don't even know how I'm supposed to write about this; only that I should.  Please, Dear God --- now, more than ever, guide my pen to reveal Your Truth.

Saturday afternoon, my husband and I decided to break the monotony of the long Thanksgiving weekend to drive to the nearest town of size to obtain some watercolor paper for his next piece of art, and to buy the couple of plumbing parts he needed to complete a repair project.  It's a 45-minute drive and we thought it would be nice to top off the afternoon with a nice meal, so I invited our neighbors to join us.  Since they were already in town doing their own errands, it looked to be a nice, relaxed opportunity to catch up and share our holiday experiences.
Our first stop was Hobby Lobby for the art supplies, and I felt like I was in a surreal movie.  The gross commercialization of Christmas was almost nauseating.  I tried to summon up a sense of the holiness of this materialistic holiday, but could find nothing to hold on to.  There was a time when I would have been giddy over the emotions that all the ornaments, and wreaths, and decorations evoked ... but since my realization that this celebration is not even Biblical, I could only stand among the excited throng and feel like I was witnessing something from afar; that I was removed and watching outside myself.  That perception would be repeated later on that night.
We finished with our errands and continued on to meet our friends at the restaurant.  For some reason, I was keenly aware of the cars and the people around me.  I drew my husband's attention to an old car two lanes over from us.  We had a conversation about whether it was a Model A or a Model T, and he schooled me on the differences in body construction.  I caught a glimpse of the white-haired woman in the passenger seat, and wondered what their story was and how they came to be driving that vintage car.  The light changed and we proceeded on to our dinner engagement.
It was nice to relax, and enjoy a meal with good friends.  We laughed and took pleasure in their company, and once again I was conscious of being more aware of the people around me ... noticing their smiles, and they way they engaged with each other.  Maybe it's just the sentimentality of the holidays, I thought.
We parted company, each couple making one last stop at the mega-grocery store to get items our small town did not offer.  By this time, it was dark, and we were anxious to make the 45-minute drive home and settle in for the night.  I remember being kind of drowsy, but we needed to stop at the corner gas station before we made the turn for the back roads toward home.  My gaze was diverted to the entrance to the convenience store, because it was always difficult to see the drive in the dark, and the complex was poorly lit on this stretch of a busy 4-lane state highway.  It only took a minute for the night to shatter into a thousand pieces.
The next sound I heard was my husband, shouting, "Oh, no ... oh, no ... oh, no!  There's been a head-on crash!"  I hadn't heard anything, nor could I see anything, but he had seen it all. Two black vehicles had collided, with one of them spinning towards the drive we were about to enter.  He said he saw the sparks of the metal from the cars and heard the explosion of the crash, and caught the silhouettes of the black cars.  He had no idea if they were careening towards us or not ... the night hid the trajectory of the vehicles.  He just knew he had to be ready to react quickly.  We were able to pull into the driveway and proceeded to the nearest gas pump to stop and get out of the way.
I grabbed the phone and immediately began dialing 911, and turned to survey the wreckage.  It was horrific.  My immediate image was of people coming from everywhere to help.  One new model black sedan was stopped on the shoulder of the highway.  It's front end was crunched up like a sardine can, and someone was helping three children out of the backseat and getting them away from the wreckage. 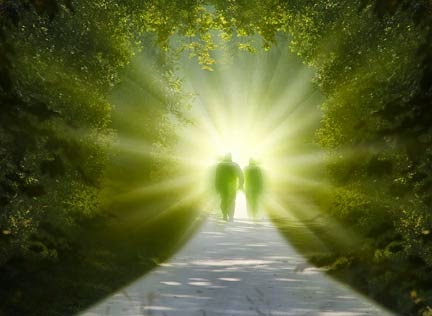 As I'm walking closer to the scene to describe to the 911 operator what I'm seeing, I hear my husband yelling at me to get back, because cars are careening around the wreckage, running over metal in the roadway, and, in the unlit intersection, unable to see the black car on the side of the road.  Then my attention is drawn to the other car.  It is the Model A car we had seen earlier in the afternoon, and the debris field from its wreckage is spread for hundreds of feet.  But it is the sight of the two motionless bodies that were thrown from the wreckage that I will never forget.  Nor will I forget the compassion and caring of human beings, one for another, as people materialized with blankets and sheets to cover them.  There was a woman in a bright pink shirt who knelt by the white-haired woman I had glimpsed that afternoon through the window of the old car.  She leaned over her, and although there was no movement, she would not leave her side.
A man was doing the same for her elderly husband, who lay 25 feet from her; he was not moving either.  We moved closer to see if we could help, but it was obvious -- at least to us -- that there was no way they could have survived such an impact.  I just kept repeating to myself, "Be with them, Lord; be with them."
My mind struggled to take it all in.  How had this horrific accident happened?  An observer stood near us, and told us he had been behind the Model A on the intersecting country lane, and the old gentleman had simply pulled out into the 4-lane highway, right into the path of the oncoming car.  Did he think it was a four-way stop, since there was a flashing light at the intersection?  Both cars were black; did one or both not have their lights on, and were unable to see each other?  We will probably never know, but my eyes scanned the scene and I saw pieces of the old car everywhere and my gaze landed on a book, sprawled open,  just outside the driver's door.  I wanted to pick it up -- to know something of these two people whose lives were over in an instant.  I wanted that book to be a Bible.
By this time, about 20 minutes had passed, and fire trucks were on the scene, with paramedics alternately performing chest compressions on both victims.  Standard procedure, I suppose.  There seemed to be no response, and we realized that there was no need to be in the way of the professionals who had work to do.  We continued on the backroad towards home; in silence, each trying to process what we had just witnessed.  A few miles down the darkened country road, we came upon the gathering of several old model cars; obviously the companions of the elderly couple in the Model A.  We would learn later that they were traveling as a group to see the Christmas lights in a small town park, some 20 miles away.
We pulled over, and they had been told of the accident and were grasping for hope.  We told them they didn't need to go back and see the scene, and one woman asked if they were life-flighting them.  We sadly shook our heads and said it didn't look like they had survived.  Then my husband asked the most important question of the night ... "Were they Christians?"  "Absolutely! No question!" came the strong response, and after expressing our condolences, we were able to leave them to cope with their loss, as we began processing the eternal significance of this night.
I have written much, in the 1094 posts, since the beginning of this blog.  A recurring theme has been the Holy Spirit's inspiration to stress the need to save souls in these unsettling times.  I have also contemplated what it will be like to leave this sinful world behind and enter into the presence of our Lord.  And I think I never understood the impact of those beliefs more than I did Saturday night.
I witnessed a horrific death of two people who knew the Lord.  And one thing has been made crystal clear:  There is no guarantee that Death will be gentle, or that our salvation makes leaving this world pleasant or easy.  What is certain, is that Death can come in an instant, without warning; and it can be violent and terrifying.  But most importantly, if you have not accepted Jesus as your Savior, that next moment will be a lonely, dreadfully frightening reality.
We didn't know these people, except for the brief moment that our human paths crossed.  I will never forget how their lives here on earth ended; but I will always hang on to the hope of knowing whose arms they rested in just moments later.  It is important to know if people are Saved!  As I woke in the early morning hours, my mind returning to the events of that night, I recited the 23rd Psalm ... the words searing my soul as the tears finally fell.  We must be relentless in speaking of the need for Salvation; we must be tireless in offering Hope to the world.  When Death comes careening towards you, there may not be time to make that eternal choice.  I don't want a single person to regret their indecision.  This existence is temporary, and if we did not know that that elderly couple were Believers, then what we witnessed would have been all the more tragic.  But this we do know ... we have an everlasting and undying life waiting for us ... through faith in Jesus Christ.  I can let go of the horror of that night, and rejoice in the two souls who just entered into that Blessed Hope.