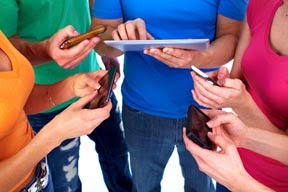 It's not often that I find myself in complete agreement with a TV personality and commentator.  But I happened to catch a segment on CBS Sunday Morning, in which I thought, "This woman must have literally stepped into my mind.  Finally, someone has the nerve to go up against the sacred cow of social media.  She's my hero!"
Radio host and personality, Faith Salie, presented a short, concise and accurate commentary on the word "Oversharing".  It was chosen by the Chambers Dictionary as its "Word of 2014."  You know how it is ... the self-designated guardians of the English language determine which word best represents the overall "sense" of a particular year.  Past winners have included "Chad", "Tweet", and "Unfriend".
Ms. Salie is actually overjoyed that "Oversharing" was chosen, because she fears that otherwise, the younger generation may never have known what we older citizens recognize -- they are sharing "Too Much Information (TMI)" and overburdening us with the minutiae of their lives.  She goes on, in her commentary, to give us all the reasons that it is her biggest pet peeve:

Chambers [Dictionary] defines "Oversharing" as being "unacceptably forthcoming with information about one's personal life."
I recently conducted an unscientific survey of three teenagers -- who may or may not be related to me -- about the meaning of oversharing. My findings revealed nothing, which told me everything. Which is to say, those young folks were hard pressed to identify oversharing.
They don't think it's weird when their friends Instagram photos of their new toenail polish, or tweet that they just saw a squirrel.
It's beyond TMI -- oversharing is not just too much information; it's incessant sharing of non-information -- breaking news about your gluten-free diet complete with duck face selfies.
We all want to feel special. To my knowledge, there are pretty much two ways to be interesting: One is to actually do interesting things, achieve the remarkable. The other way to be interesting is to be interested, curious about the world and about other people -- not relentlessly revelatory about yourself.
And here is where Faith has won my heart!  She continues her rant:  As far as I can tell, both of these usually involve putting down your smartphone.  Hallelujah!  Someone else besides me thinks there is life beyond cell phones!  Sorry, I just had to throw my two cents worth in ... back to Faith:
To be truly curious is to be humble, even discreet. ["Discreet," by the way, is a word. If you are under 20, please look it up.]
Like all vices, oversharing has its consequences. Recent studies identify a malady called "text neck." The angle at which we ceaselessly check our smartphones creates a 60-lb. stress on our necks that can cause serious permanent damage. Also, someone might club you with your selfie stick.
Not that I'm any good at it, but the beauty of meditation is that it liberates us from our own thoughts. Shouldn't we do the same favor for everyone else? Give them a break from our status updates?  And here is the genius conclusion that I want to shout from the rooftops:  By the way, everyone who thinks it is necessary, or cool, or that I might be interested in your every waking thought or deed ... you do know, don't you that Status updates don't actually give us status!
Faith concluded her smart and savvy commentary with the following memory from times past:
Oversharing was around when I was a youngster.  It occurred in a thing called a diary, which was "a book" full of "paper" in which you wrote, using a "pen." You were the only one who saw it, and you overshared with yourself through more than 140 characters.

Now, I know that not everyone will enjoy her witty sarcasm as I have.  In fact, it is not only the younger generation that I would direct to her commentary.  There are plenty of older, mature people who have somehow become hypnotized by the lure of technology and the "cool factor" of Facebooking, Tweeting, Instagramming, Instachatting, and whatever is the latest online app that has captured their attention.
Sometimes I feel like I am the only one who sees how all this keeps us focused on ourselves; our eyes, our minds, and our actions are all centered around the next thing we can do, so that we can take a photo, and post it to all our social media sites, and watch how many people "like" us.  Does that sound pathetic to anyone else?
The world seems obsessed with themselves!  And how can that be?  If they lifted their heads from their devices for just one day, wouldn't you think they would realize that the rest of the world seems to be spinning out of control?  That maybe, we need to figure out what the human race is doing wrong to reap such death, wars, starvation, and disease?  That maybe we need to recognize our need to be saved from ourselves?
But as long as humanity continues to find solace in worshipping themselves, and craving acceptance from others, then the latest technology fad will provide the deliverance they seek -- a way to ignore the evil in the world, and escape any personal responsibility in perpetuating it or stopping it.  It's all about avoidance -- avoiding fear, avoiding accountability, avoiding moral decisions, and avoiding the consequences that will come at the end of this life.
They will tell you they just want to "stay connected", and technology has allowed them to do that easier and faster.  I can't help but think that all this time spent updating their status on social media sites could have been better spent connecting with God -- that rather than "oversharing" their personal information with their fellow man, they could have been "overcoming" the barriers that keep them separated from their Savior.  His is the only acceptance we should be seeking.

Psalm 14:2    "The Lord looks down from heaven on the children of man, to see if there are any who understand, who seek after God."