George Bailey vs. The Greedy Global Elites of the Federal Reserve 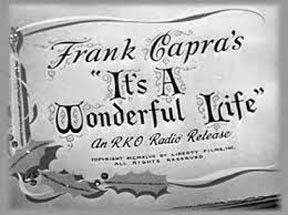 My wonderful husband was the impetus for today's post.  He knows that It's A Wonderful Life is one of my all-time favorite movies.  First of all, I'm a huge Jimmy Stewart fan; and secondly, I love the theme of the movie -- namely that each one of our lives touches so many people; we don't even realize how the world would be different if we weren't in it.
But as PLW was eager to show me, Frank Capra's brilliantly directed movie has an underlying theme that will have me watching it with new eyes and ears.  Let me explain ... First of all you need to know that Mr. Capra was an extremely patriotic American.  After leaving his native Italy at the age of five, and crossing the Atlantic with his family in the steerage section of a ship, he never forgot the lack of privacy nor the degradation.  And he always remembered his father's exclamation at the sight of the Statue of Liberty:  "Look at that! That's the greatest light since the star of Bethlehem! That's the light of freedom! Remember that. Freedom."
His experiences as an immigrant, and the hard work it took him to achieve success in the film industry contributed to the themes of some of his most famous movies, including Mr. Smith Goes To Washington, Meet John Doe, and the subject of this post, It's A Wonderful Life.  All of his films stressed a deliberate reaffirmation of solid, moral American values, and his strong political views.
As noted in Wikipedia, "Capra’s political beliefs coalesced in his films, which promoted and celebrated the spirit of American individualism. A conservative Republican, he had railed against Franklin Delano Roosevelt during his tenure as governor of New York State, and opposed his presidency during the years of the Depression. Capra stood against government intervention and assistance during the national economic crisis. A man that had come up the hard way, overcoming the disadvantages of an immigrant background, Capra saw no reason why others could not accomplish success through hard work and perseverance."
One of the primary reasons that Capra disapproved of Roosevelt's Presidency was the collusion between the President and the Federal Reserve, and the effects upon the banking industry.  And this distrust appears as an underlying theme in It's A Wonderful Life.  Mr. Potter represents the Federal Reserve; both are greedy Elites who control the private banking industry and enslave the populace through fraud, fear, and their manipulation of loans and interest rates, leaving all the George Baileys of the world staring into the abyss of debt and financial ruin.  As a video on YouTube asks, "Do we live in a country that looks more like Pottersville than Bedford Falls?" 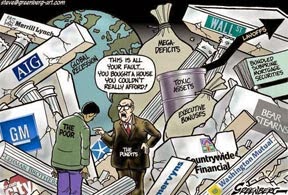 In the movie, Mr. Potter took over the banks, guaranteeing them "sufficient funds to meet their needs"; and declares a bank holiday.  This by the way is similar to what Roosevelt did during the "banking holiday" of 1933.  (And it remains a constant threat during our ongoing crisis). It has definitely been the pattern during our country's history of financial difficulties.   During the financial panics in 1907, the Depression, and 2008, the Elites of the Federal Reserve were able to shut down competitors, and snap up assets at fire sale prices. (For instance, the Federal Deposit Insurance Corporation (FDIC) closed 465 failed banks from 2008 to 2012. In contrast, in the five years prior to 2008, only 10 banks failed.)  And you might be interested to know that the FDIC is a United States government corporation operating as an independent agency created by the Banking Act of 1933, considered a part of Roosevelt's New Deal.
Another little piece of history comes from a quote by Charles Lindbergh, Sr., father of aviator Charles Lindberg, and a U.S. Congressman who voted against the Federal Reserve Act of 1913.  He accurately portrayed the Federal Reserve as "the strangest and most dangerous advantage ever placed in the hands of a special privilege class by any Government that ever existed.  The system is private, conducted for the sole purpose of obtaining the greatest possible profits from the use of other people's money."  Sounds like the manner in which Mr. Potter wanted to run the Building & Loan upon the death of Peter Bailey, George's father, doesn't it? He proves that the Federal Reserve does not have the same motivation to lend, as do the smaller, private banking institutions.  In fact, Mr. Potter spends the entire movie trying to put George Bailey out of business.
Would it surprise you to know that there are currently only 6,891 banks in the U.S. -- the fewest since 1934, when the federal government started keeping records.  This figure is down from about 18,000 in the mid-1980's, because small banks are disappearing.  Between 1984 and 2011, more than 10,000 banks, holding assets of less than $100 million faded from the scene.  Nearly 17% failed, while the rest entered into mergers or consolidations.  As George Bailey says, "This town needs this measly institution, if only so people have somewhere to go without crawling to Potter."  In 2014, our choices are rapidly disappearing.  The Federal Reserve is eliminating their competition, just as Mr. Potter tried to do. 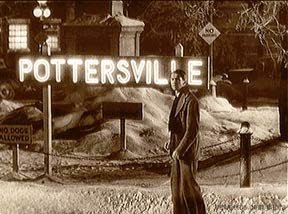 In the film, Frank Capra shows us what can happen to society when there is no longer healthy competition (in the person of George Bailey) to counter the Big Banks; when there are no longer Credit Unions or Savings and Loan companies.  Vice runs rampant, the people are angry and distrustful, and the law becomes corrupt.  Everyone is a renter; no one has a stake in their community.    George Bailey's small Building & Loan is a champion for private ownership of property, and is the antidote to Pottersville (the Federal Reserve's vise grip on finances).  George rightfully asks the Board of Directors, who must decide between Potter's management of the Building & Loan or his leadership ... "Doesn't it make them better citizens and better customers?"  In other words, shouldn't we be encouraging the citizenry to become financially successful, with the opportunity to grow their own wealth?
But like Mr. Potter, the global Elite don't want to share the wealth; they want to control our level of success, and they are able to do it through vehicles like the Global Carbon tax, or the various trade agreements fostered by the United Nations.  They would not be moved, anymore than Potter was, by George Bailey's passionate plea for the average citizen who does "most of the working and paying and living and dying in the community." George disputes the image that Potter has of the average working citizen as "cattle".  Yet, that is exactly how the Elite see us. 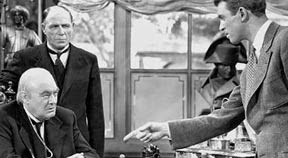 And if someone like George dares to stand up to them, then they are simply bought off, as Potter attempts to do with George, offering him a high-paying job, expense accounts, trips to Europe, and the ability to buy his wife nice things.  The sad thing is, if George had succumbed to the temptation, the $20,000 per year salary would have been subject to the manipulations of Potter.  As Congressman Lindbergh pointed out,   "They [the Federal Reserve] know in advance when to create panics to their advantage.  They also know when to stop panic.  Inflation and deflation work equally well for them when they control finance."  It's likely that Mr. Potter was more interested in destroying George than he was in growing his ability to accumulate wealth and status.
And look at what the Federal Reserve has done to our abilities to increase our wealth.  Through inflation, the dollar has lost 90% of its value since It's A Wonderful Life was made in 1947, until 2013.  This deliberate control by the Fed makes it nearly impossible for anyone to gain wealth through hard work and saving.  But is that what we really want our lives to be about?
That's why I love this movie so much!  Because in the end, we see that all of Potter's wealth and control of finances leaves him cold and embittered.  It's the George Bailey's of the world that are truly rich.  George realizes that his family and friendships, and the honest relationships he has made through his life's work are what really counts. 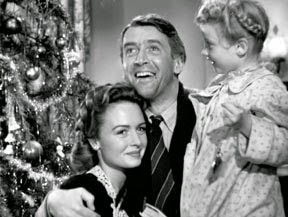 And I love to think that perhaps Frank Capra was hinting at some future audit of the Federal Reserve in the final scene as George welcomes the Bank Examiner to complete his own audit.  And we must not dismiss the role that prayer played in turning George's life around.  It was the prayers of his wife and children, his mother and family, his friends, and his business associates that stopped Mr. Potter's evil schemes.  You see, God hates prolonged and unjust treatment, and tyrannical control by immoral men.  I know that It's A Wonderful Life is only a movie, and a sentimental one, at that.  But there are some foundational truths in the way it ended.  I believe that our prayers as a nation can effect the end of the stronghold of the Federal Reserve.  God is stronger than any cabal of global elite, and He is Sovereign over the affairs of men.  Maybe there's a reason that It's A Wonderful Life remains at the top of the film industry's all-time movie lists.  Isn't it time that we look to God and return to the values that George Bailey and his "old Building and Loan" represent?

Proverbs 22:16    "Whoever oppresses the poor to increase his own wealth, or gives to the rich, will only come to poverty."

Email ThisBlogThis!Share to TwitterShare to FacebookShare to Pinterest
Labels: Finances, Liberty and Freedom