Could This Become Our Nightmare? 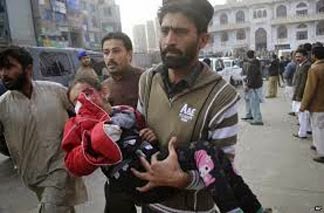 No more excuses!  Everyone in this country should be fully awake now.  The horrendous massacre of innocent students in Peshawar, Pakistan is to be condemned by every human being on the planet.  But lest we think that this is a nightmare in some far-off land, we need to quit fooling ourselves and pretending that we are somehow exempt from such atrocities.
We have a real enemy, people! It is an enemy that has broadcast their plans to strike us from within.  And from the 2004 Beslan school massacre, carried out by Islamic terrorists to this one in Pakistan, the surest way to devastate any nation is to harm its children.  So let's not be naive.  It is by the grace of God that we have yet to suffer such a tragedy.
It is time the American people got real about what we are facing.  It is time we made plans to protect our most innocent citizens.  Read William Forstchen's Day of Wrath, and you will see how easily this threat could be carried out against our politically correct society.  Ignoring the extent of the depravity ... reports of headless children; teachers burned alive in front of students; suicide bombs placed amongst the children ... will not make it disappear, or less likely to occur again.  And we must not make it easy for the terrorists to commit such a horrendous campaign on our soil.
Do you think they aren't aware that our schools are "gun-free zones"?  And do you think that well-armed and well-trained teachers just might be a deterrent to their evil plans?  When are we going to realize that the Western mindset of civilized and rational behavior is no defense against ancient cultures that celebrate cruel and savage attacks to demoralize their enemy? 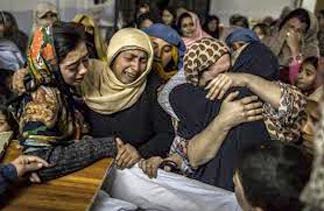 And for all those who, in recent days, have criticized the CIA and their advanced interrogation methods as "torture", I would ask you to consider this ... if you knew that your child was going to be in that Pakistani school this morning when the terrorists stormed through a cemetery to launch their attack, would you approve of a water boarding session -- or a few nights without sleep -- of one of the terrorists in order to gain information to stop the possibility of your child being shot, beheaded, or worse?
I have heard people referring to the CIA methods as "barbaric" and "diabolical".  While, I absolutely hate the idea of war and what it makes men do to each other, I cannot equate interrogating a prisoner to the merciless and monstrous acts of these terrorists.  It is they, who are the barbarians.  And, unfortunately, what we may be called upon to do to stop Evil incarnate, goes against everything that our faith asks us to do in serving our fellow man.  While I never want to take another person's life, I have decided I must adopt the attitude of Dietrich Bonhoeffer, the German pastor who faced the worst that the devil could throw at him, in the person of Adolph Hitler.
Pastor Bonhoeffer made the difficult decision to become involved in an assassination plot against the Fuhrer.  As he struggled with his conscience, he came to the final conclusion that God would have to understand that his decision was based on the need to stop such heinous evil.  He would take his chances at the throne of God, instead of living one more day doing nothing to stop Hitler's atrocities.  Have you given thought to the idea that we, too, may soon be faced with similar dilemmas?
It is time that we come out of our national fog.  It is time that we see our enemy for who he is.  It is time that each individual must decide what he is willing to do to protect himself, his family, and his nation.  And it is time that we turn back to our God in repentance and supplication to "Deliver us from Evil."
This is more than a matter of law and order; Evil does not respect the rules of a society ... it demands chaos, ruin, and death.  Are we going to wait until it targets our children, or are we going to get mentally, physically, emotionally and spiritually ready to defend what's ours?

Psalm 44:5    "Through You we will push down our enemies; through Your name we will trample those who rise up against us. For I will not trust in my bow, nor shall my sword save me. But You have saved us from our enemies, and have put to shame those who hated us. In God we boast all day long, and praise Your name forever."
Posted by Pam Kohler at 7:00 AM