Can We Heal From Ferguson?

Protests surrounding the Ferguson debate continue to dominate the news cycles.  The media pits representatives, who are clearly one-sided on their perspective, against each other -- after all, it makes for entertaining and interesting dialogue.  But does it serve to further positive relations in a nation torn apart by the racial divide?  Is that even the objective of such debates?  Or are we truly on the verge of a "new" civil rights movement, as provocateurs like Al Sharpton and Louis Farrakhan allege? 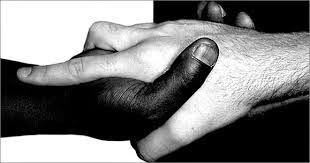 At the time, I was not old enough to have understood the issues behind the civil rights movement in the early 60s.  However, I instinctively knew that something important was happening.  As I peruse  the transcript of Dr. Martin Luther King's famous "I Have A Dream" speech, I can't help but feel the goals of the two movements are diametrically opposed.
Both movements have "racial justice" in common; but King promoted nonviolence, cautioning protestors, "Let us not seek to satisfy our thirst for freedom by drinking from the cup of bitterness and hatred."  Today's civil rights leaders (like Sharpton and Farrakhan) urge their followers to gear up for "a fight" -- and not through peaceful methods!  King hoped to "transform the jangling discords of our nation into a beautiful symphony of brotherhood."  Farrakhan wants to "tear this (expletive) country up!"
It is not hard to see that as long as violence and hatred are exploited by both public and political figures, the races will never come together in mutual understanding and respect.  And I tend to agree with former basketball great Charles Barkley, who says the media is largely to blame.  "The media loves this stuff," he said, and until information began surfacing from the evidence presented to the grand jury, networks had free rein to spin it anyway they wanted.  The more they could fan the flames of racial hostility, the higher the ratings.  And, if in the process, the Truth was ignored; well, that didn't really change anything between the races, did it?  After all, no one would believe anything different, right?
And how dare anyone bring Faith or the blessed name of Jesus into the conversation.  As I related in an earlier post, NFL player Benjamin Watson made quite an impression on social media with his honest and prayerful impressions of the Ferguson controversy.  So, of course, the media jumped all over that story.  The desire for higher ratings will even lead to religious tolerance -- up to a point, that is.  While being interviewed at CNN, Watson was warming up to his theory that the nation's racial problems are related to sin, not the color of skin; and the cure was "to understand that Jesus Christ died for our sins."  It was obvious that the CNN anchor was getting uncomfortable with the direction the interview was headed, and kept trying to cut him off.  But Watson persisted, talking over the talking head, until she finally cut him off, going to a green screen, and pretending that she had lost transmission. “Whup…just like that, we lost him,” she said.  Yeah, right.
Well, even in the midst of such negative coverage, I want you to know that there are reasons to be optimistic.  I hope you have had the opportunity to see some positive stories that are emerging from the protests.  I'd like to share a couple.  Did you hear the one about the black residents of Ferguson who showed up (armed) to protect a local gas station from looters?  Everything around the Conoco station was burned and looted, but these young men stood guard over the property and customers who arrived at the station.  It remained unscathed.  It seems that the owner (a white man) had hired each of the men, at some point in the past, and had treated them with respect and dignity.  They showed up to help him save his business.  This is a story of mutual respect and doing the right thing.
Then there is the story of a group of student protesters who shutdown a California highway, in an apparent attempt to impact commerce.  But one hard-working man, who was black, did not see the purpose in such tactics.  He was just trying to get to one of the three jobs he works to support his six kids.  He grabs a protester's bullhorn and tries to reason with the mob.  In an expletive-filled video, he can be seen telling the crowd that this isn't the way, that they should do "the right thing".  He admits he was confused, frustrated, and angry about being delayed for work, and worried about losing his job.
"I'm nobody special," he said.  "I was just trying to do the right thing."  But his actions so moved people that a fund has been started on social media to provide him with the means to give his kids a great Christmas.  This is a story that shows that our preconceived biases are not always correct, and that human beings respond to sincerity, courage, and ethics -- no matter the skin color. 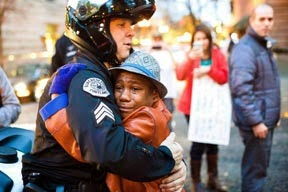 There is also the story of Devonte Hart, a 12-year-old black youth who attended a protest in Portland, Oregon, and stood on a street corner holding a sign that said, "Free Hugs".  The photo of Devonte, with tears streaming down his face, hugging a white police officer, has gone viral.  It is becoming a symbol of hope for reconciliation between the races.
But there is more to the story than you might know.  According to an online profile of the young man, "[Devonte] was born to a drug-addicted mother, and by the time he was only four-years-old he had suffered extreme neglect; he had smoked, been given alcohol, handled guns and been shot at. His abusive childhood meant that he could barely speak, and he suffered from a number of disabilities."
His adoptive mother, Jen Hart, relates that he had struggled "with living fearlessly when it comes to the police"; that he didn't fully understand the circumstances surrounding the Ferguson incident, and worried that he might one day be the subject of prejudice by simply being a black male.  All those issues contributed to his tearful stance on that street corner.
But the compassion of Sgt. Bret Barnum should not be discounted.  He approached Devonte and they engaged in a private conversation.  At the end of it, he asked Devonte if he could have one of those free hugs.  The viral photo captures the sincere and heartfelt exchange between the white policeman and the black youth.  We should not dismiss the message this photo conveys.
Unfortunately, this is not the message of the "new" civil rights movement.  It is not hard to discern that there are those who wish to perpetuate the racial hatred; power is a seductive temptress, and one's authority and leverage might be compromised should the races find common ground.
Martin Luther King advocated becoming a voice "of reason, sanity, and understanding amid the voices of violence, hatred, and emotion."  He also said, "Someone must have sense enough and morality enough to cut off the chain of hate."  Those who would promote violence and anarchy while laying claim to his legacy, and project themselves as his predecessor, do a great injustice to his memory and those who walked by his side.
Today, I asked if we could heal from Ferguson.  If left up to man, I would highly doubt our chances of success.  There are forces, both human and spiritual, who stand to profit from continued strife and conflict.  The voices say they want freedom, but true freedom includes being free from hate.  True freedom gives us the opportunity to love and serve each other.  I admit we have a long way to go, and injustice too often prevails.  But as each of the positive stories I have presented shows us, it is possible because we were made in the image of God, who IS love. We just have to want it; to receive it and to give it.  It's the only way to heal.

Galatians 5:13    "For you were called to freedom, brothers. Only do not use your freedom as an opportunity for the flesh, but through love serve one another."

Email ThisBlogThis!Share to TwitterShare to FacebookShare to Pinterest
Labels: Law and Order, Our Culture.