Is Chrislam The One World Religion? 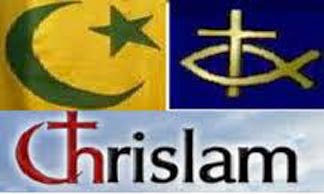 Whether you believe in the Bible and its End Times prophecies or not, you must admit that Christianity and Islam make for strange bedfellows.  Yet, that is exactly what three different events that I am about to reveal seem to project.  Chrislam is the blending of the Christian/Judeo faith with the tenets of Islam, and you might want to investigate what the Good Book has to say about this false religion, and how it will affect the world.  It's all there in the Book of Revelation; Chapter 17 to be exact.
Specifically, it is described as a "harlot", which scholars often use to describe a false religion.  But more specifically, this false religion is depicted as dominating all the “peoples and multitudes and nations and tongues” of the earth; as well as having great influence among the world’s rulers and influential people, who become "drunk" on her false promises.  Furthermore, these leaders are accused of committing adultery with the harlot, showing that she lures them away from their faith in the true God.
So, what does all this have to do with Chrislam?  Keep in mind the descriptions I've just given you, and let me relate the following events.  First, Pope Francis is hosting a global ecumenical conference at the Vatican this week.  (Remember, the meaning of "ecumenical" is universal; all-embracing; and all-inclusive).  In attendance will be representatives of all the major religions of the world; including the Christian, Jewish, Islamic, Buddhist, Hindu, Jaina Shasana, Taoist and Sikh religions.  Now, of course, this all appears to be "on the up and up", as the conference is centered on marriage between a man and woman, and the revitalization of the family for the good of society.
But when the conference is sponsored and promoted by the Pope and the Pontifical Council for Inter-Religious Dialogue, and features speakers such as Rick Warren, who has been quoted as stating that "Muslims and Christians believe that God is one", it casts serious doubt as to the real purpose of this event.
Secondly, this past summer Pope Francis worked with a German art historian to share Islamic works of art from the Vatican's Ethnological Museum with a museum in Sharjah, one of the emirates of the United Arab Emirates.  The artworks on display stem from the 12th to the 19th century, but also include valuable objects from everyday life in the Arab world, all owned by the Vatican.  Most of the objects had arrived in the Vatican in 1925 when Pope Pius XI hosted a kind of international cultural exhibition comprised of gifts presented to him from private donors and missionaries stationed all around the world.  After the exhibition, the collection needed a permanent home, and the Vatican established its Ethnological Museum.
The sharing of the Vatican's artwork is being hailed as "an act of diplomacy" by Pope Francis, who prefers to be more open and accepting of other religions, unlike his predecessor Pope Benedict XVI, who had distanced himself from other faiths.  This Pope sees himself as a "unifier" and advocates for the role of culture in religious, social and moral matters.  In fact, the exhibit is being promoted as  "the first collaboration of the Vatican with an Arab country", and furthering the "dialogue between Christians and Muslims."  Fittingly, the title of the exhibition is "So that you may know each other", which is actually a verse from the Koran in response to the question of why people are so different.  You can decide for yourself if this is just good PR, or if this is foretelling a deeper motive.
Finally, did you know that Berlin will be the home of a temple where Muslims, Jews and Christians will worship together?  It will be called the House of One, and each faith will meet in separate "compartments" (a synagogue, a church, and a mosque), and then converge to worship together as they find "common ground".  Can it be anymore clear that a hybrid religion is in the works?  And I find myself asking why leaders of the Jewish faith would agree to be involved in such a project in the very city from which Hitler's design for their distinction was born?  Are they just "drunk" on the false promises of a One World Religion?  And could this be viewed as another sign, or signal, to the Islamic world that they are dominating the world's religions?  I don't know what is motivating these religious leaders, but a Temple of Chrislam is not the answer.
I realize that not everyone sees these events through the same Biblical lens that I do.  But it is my solemn wish that people would consider what the Bible reveals about this End Times religion.  I cannot say for sure that Chrislam fits the bill, but it sure is headed in that direction.  The Bible prophecys that this One World religious system will be used by the AntiChrist, at least at first, to entice and attract the world to her uniting promises.  It will be an instrument of his deception to gain the world's adoration.  But when she becomes drunk on her own power, and has fulfilled her purpose of forcing everyone to bow down at her counterfeit altar, the AntiChrist will turn on this false religion and usurp her power for himself; establishing himself as God.  The deception by both the Harlot (a tempting One World Religion) and the Anti-Christ will be so great, that even Christians should fear falling for it.
So, I mention these events and show their connectivity to encourage you to be aware and to stand strong in your faith.  Deception is rampant in our world today.  Nothing is as it seems.  But we must guard ourselves against the deceit and lies that will fool the world.  The time is short until Evil reveals its true self, and we must all declare our trust in Jesus and the Father.  Our eternal lives depend on it!

Revelation 17:4   "And the woman was arrayed in purple and scarlet colour, and decked with gold and precious stones and pearls, having a golden cup in her hand full of abominations and filthiness of her fornication..."