Freedom Has Never Been More Precious ... Or More Vulnerable

"Freedom is never more than
one generation away from extinction."

We are all familiar with Ronald Reagan's quote from a speech he gave on Labor Day, 1980.  He has been credited with providing one of the most direct warnings to this nation since its inception; but, in reality, this truth is as old as the Bible.  In fact, if you study Reagan's entire speech, you will find an undertone of spiritual meaning in his address.
But in order to understand how important this advice is, we need to consider the "bigger picture" of just what "Freedom" is, and the consequences of not protecting it.  Reagan gave this speech just before the 1980 Presidential election, when the effects of four years of the Jimmy Carter Presidency were high taxes, high inflation, and 8 million people out of work.  Lech Walesa was leading the way for freedom in the workplace, as he stood up to Poland's Communist authorities.  The tearing down of the Berlin Wall was only a few years in the future ... talk of "Freedom" was in the air. 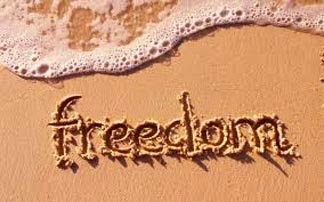 Reagan talked of "restoring the American Dream", but he knew that it required more than sound economic policies and a vibrant workforce.  He spoke of "a return to spiritual and moral values, values so deeply held by those who came here to build a new life."  He declared, "We need to restore those values in our daily life, in our neighborhoods and in our government’s dealings with the other nations of the world."  And then he spoke of how this precious Freedom could be lost in a single generation.
No story reflects this more than the generation of Israelites who lost the freedom of their Promised Land due to unbelief and disobedience.  And I fear that we are doomed to follow the same path.  Like the Israelites, who fled their bondage in Egypt, God led the first oppressed immigrants to the shores of America; to "a good and broad land, a land flowing with milk and honey" (Exodus 3:8).  The founding of this nation was nothing short of a miracle, and God has proved His faithfulness through many marvelous blessings upon this nation.  For a couple of centuries, the inhabitants of this land never doubted the need for God's guidance in securing our prosperity, security, and future.  We enjoyed a Freedom that came from believing in "the Truth"; from relying on The Word, which would set us free from the godlessness of the world.
But then, like disillusioned Israelites, who listened to the false reports of the 10 spies; we began to listen to the voices of those who told us that God's influence was no longer needed; that the "spiritual and moral values" that President Reagan spoke of, were no longer relevant.  We forgot the lessons of the Israelites, who lost their Promised Land -- in one generation -- because they doubted their essential need for God.
As long as they had exalted Him, and lived by His spiritual and moral values, they were delivered up to success.  They flourished in their daily lives, their neighborhoods, and their relations with foreign governments -- Reagan knew, that we, too, needed to return to those same values to get those same results.
But the Israelites soon abandoned their reliance on God and listened to the Deceiver's promises of "false freedom" by way of their own selfish desires, and they sealed their fate.  The generation who turned their back on God and chose to ignore His promises were stripped of their destiny.  I believe that is what Reagan had in mind, when he warned us not to take Freedom for granted.  God has given us Victory in this land.  In record time, we grew to the most powerful and prosperous nation on earth. Do we really think we did that all on our own?
God blessed this land and protected it.  All we had to do was trust in His guidance and follow His commandments.  There was true freedom in that.  But now we stand on the precipice of losing that precious gift.  It is not only that the number of unemployed Americans is nearly two-and-a-half times what it was when Reagan issued his warning, but we see the destruction of the family, the ruination of our communities, and our loss of standing and respect among our fellow nations.  Our "worldly" freedom is most certainly in jeopardy.
But it is our "spiritual" freedom that I fear is most threatened.  All we have to do is look at history as it is recorded in the Bible.  Whenever the nation of Israel decided to "go it alone", and that they no longer needed to obey God, it displeased Him and He turned His back.  We deserve no less.  We are showing such ingratitude for the Providence of God's Hand, and I pray that Ronald Reagan's cautionary warning does not become a self-fulfilling prophecy.  As he went on to say in his speech, "We must protect and preserve freedom here or it will not be passed on to our children."  In order to accomplish this worthy goal, we must return to God's Truth.  That is where our true Freedom lies, and it's what will save Liberty for the next generation, and generations to come.

Galations 2:4    "But false brothers and sisters, who were brought in secretly, slipped in to spy on our freedom, which we have in Christ Jesus, and to make us slaves."