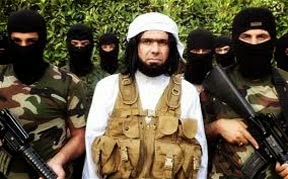 These days are difficult.  In the wake of a reported second beheading of an American journalist, how can we live our lives in a normal fashion?  A monstrous terror group holds the free world in a grip of horror and alarm, and the political machine in Washington wants to talk semantics.  Are we at war with the Islamic State, or not?  Because they sure appear to be at war with us!  But we have to play it smart!
We can no longer avoid the taunting images of Americans in orange jumpsuits, with knives at their throats.  It all plays into the 20-year plan initiated by Al-Queda.  It all began with what radical Islamists called "the Awakening" in 2000.  That included the 9/11 attacks and the successful drawing of American troops into Afghanistan and Iraq, thereby "awakening" the Muslim world against the West.
This was followed by the second stage of the Plan's timeframe, called "Opening Eyes."  The years between 2003-2006 saw an increase in the training of jihadists and a growing awareness among Western governments that radical Islam was busy at recruiting an army.  Our eyes were opening to the growing threat.
Stage Three, from 2007-2010, was known as "Arising and Standing Up".  Radicalism spread to Syria and Turkey, with increased attacks on Israel and neighboring countries.  They were making their move.  Next, the focus was on governments that stood in their way.  Stage Four is called "Destroy Hated Arab Governments", and we saw this happening from 2010-2013.  The so-called Arab Spring saw Tunisia, Libya, Egypt and Syria experience tremendous upheaval in their governments, and radicalism took control.
We are now in full-blown Stage Five:  "Declare the Caliphate".  ISIS has surpassed Al-Queda in striving towards the 20-year goal, and they have achieved Stage Five in a rapid and terrifying fashion.  And they have made it clear they do not plan on backing down or away from achieving their plan.  They no longer fear Western intervention and truly believe that the new Islamic State will eventually bring about a new world order.
If we are going to stop this march of evil, it needs to be now because Stage Six is on the horizon!  In this stage, which radical Islam calls "Total Confrontation", they are relying on the undeniable establishment of the Caliphate.  Once achieved, their plan is to instigate "the Great Battle" between their believers and the Infidels.  This aligns with their Armageddon, which they predict will happen between 2016-2020.  And it will not be limited to fighting in the Middle East.  Surely, you have heard reports of the slick YouTube videos in which ISIS boasts that they are in our states and our cities, and predict blood in our streets.  If not, you need to get in the game!
The final stage, Stage Seven, is known as "Total Victory".  ISIS smells that victory in the air, and they do not intend to stop until it has been achieved.  What can we do to prevent this?  Obviously, get on our knees, ask for forgiveness and pray to Jehovah for protection.  ISIS may be a physical army from hell, but the power behind them is spiritual and Satanic.  That is the real battle, and it is in the spiritual realm.
But there is still an earthly component to this reign of terror, and like I said at the beginning of this post, we have to "play it smart."  There is no time to ruminate over what to call this conflict, or how to approach the enemy.  We must not re-play Stages One and Two, by re-invading their homeland with infidel "boots on the ground".  That will only result in inspiring more radicalism and more recruitment material.  We must not allow the "Total Confrontation" to happen on earth.  We must do whatever it takes to stop the evil in its tracks, and completely defeat the advancing hordes.  Then we must let God and His heavenly army fight the battle in the Spiritual realm.  Let Him go before us and conquer the Enemy.  It is His battle to win!
Until then, we must not waver; we must fight the enemy to win; and we must not denounce our Faith or our way of life.  We must return to a Godly form of living and turn from our destructive paths.  We can do it if we will embrace an unwavering Hope and a steadfast Courage.  We know to Whom we belong, and it is time to live like it!

Philippians 1:28:    "That way, you won’t be afraid of anything your enemies do. Your faithfulness and courage are a sign of their coming destruction and your salvation, which is from God."