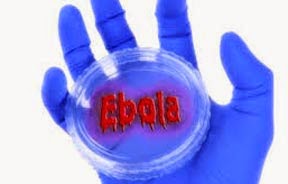 The news about Ebola is not good.  News sources are now reporting that the disease is doubling every three weeks, and the number of dead is rising exponentially.  In an article on Right Side News, the head of the Center for Disease Control says that the spread of Ebola is "spiraling out of control" and that it is "going to get worse in the very near future."  So much for "there's nothing to worry about", right?
But what is even more alarming is the report in this same article that the World Health Organization says "that we could see the total number of Ebola cases reach 20,000 nine months from now.  But computer models created for the National Institutes of Health and the Department of Defense are projecting that Ebola could soon be growing at a rate of 20,000 cases per month...".
And in case those statistics are not depressing enough, a scientific model "created jointly by a researcher at the University of Tokyo and a researcher at Arizona State University has produced a "worst-case scenario" of 277,124 Ebola cases by the end of this year..."!
Yet those are not even the worst numbers.  Right Side News provides these additional statistics:  "An 'econometric simulation model' created by Francis Smart at Michigan State University is predicting that a whopping 1.2 million people will die from Ebola in the next six months, based on the conclusions of Canadian researchers who proved the strain of Ebola in the current West African epidemic could go airborne."
Need more proof that Ebola could affect the world?  Jonas Schmidt-Chanasit, a prominent German virologist reported that "hope is all but lost for the inhabitants of Sierra Leone and Liberia.  The virus will only 'burn itself out' when it has infected the entire population and killed five million people." But what's to stop it from being transmitted to other countries?  There have already been cases of foreign aid workers who become infected while treating the sick, and then returning to their home countries.
And the American people are just now digesting the news that 3,000 American military and medical personnel will be going to Africa to try to fight the spread of the disease.  Will they be adequately protected?  Given the rapid escalation of the virus, what are the chances that many of them will come home symptom-free, only to discover within a week or so, that they are infected?  And, in the meantime, how many others will become exposed through contact with them?  The six-page "checklist", distributed by the CDC to hospitals to identify possible Ebola victims, seems to indicate that domestic cases are expected.
The experience in Africa has shown that once the disease begins spreading, it is hard to control it; and an epidemic (widespread occurrence in a community or area) quickly becomes a pandemic (spreading to a whole country or the world).  My fear is that we are not prepared for what that looks like. 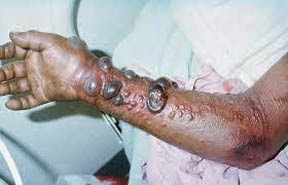 But an article in The Guardian gives a first-hand account from an aid worker in Liberia:  I wake up each morning – if I have managed to sleep – wondering if this is really happening, or if it is a horror movie. In decades of humanitarian work I have never witnessed such relentless suffering of fellow human beings or felt so completely paralysed and utterly overwhelmed at our inability to provide anything but the most basic, and sometimes less than adequate, care.... In one afternoon last week I watched five seemingly fit, healthy, young men die. I gave the first a bottle of oral rehydration solution and came back with another for the second. In the half a minute or so in which I had been away the first man died, his bottle of water spilled across the floor. The four others followed in quick succession... It is extremely sad to see the indifference of the international community with regards to this epidemic. It is great to see an added interest and investment in research for vaccines, but we urgently need experts who are physically present and more structures on the ground here in west Africa, where the situation continues to be catastrophic.
In this seemingly civilized and advanced world, it is unconscionable that there was not a quicker reaction to this hideous disease.  You cannot tell me that the minute that Scientists and Virologists from the Western world heard the word "Ebola", they did not discern the dangers and the consequences from inaction.  Now the negligence and apathy of governments and medical experts threatens not only the continent of Africa, but potentially the entire world.  The threat of Ebola can no longer be minimized or ignored.  Please consider what you will do if, and when, this nightmare begins in America.  The time to pray and prepare is now!

Revelation 3:10    "Because you have kept my word about patient endurance, I will keep you from the hour of trial that is coming on the whole world, to try those who dwell on the earth."
Posted by Pam Kohler at 7:00 AM