I happened to catch just a few moments of British Prime Minister David Cameron's press conference on Friday.  At first I couldn't believe my ears ... a world leader who actually perceives the very real threat of Evil that exists because of the Islamic State (ISIL), and is not afraid to propose a comprehensive plan to stop it.
Noting that the barbaric murder of American journalist James Foley appears to have been committed by a British jihadist terrorist, Cameron took the lead in addressing what other leaders in the world are reticent to admit.  He was announcing that he had raised his nation’s threat assessment to its second-highest level, in the wake of reports that 500 British jihadists had fought with the Islamic State army, and now were on the verge of returning home.
These threat assessments and levels have become almost common fare since the September 11th attacks, and we tend to hear the issuance of them with a somewhat cynical ear.  The rationale for their announcement is never straightforward nor transparent; we're always left wondering if it serves some political benefit.  Not so, with PM Cameron.
“The root cause of this threat to our security is clear,” he said. “It is a poisonous ideology of Islamic extremism.”  Boy, he couldn't have been any more candid, if he tried.  Furthermore, he warned of the danger of a policy of continued concessions:  the problem of ISIS “cannot be solved simply by dealing with perceived grievances over Western foreign policy” and it cannot be “appeased.” 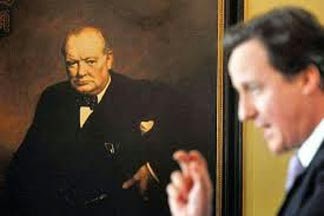 It's no wonder that of all the former Prime Ministers, Winston Churchill is Cameron's favorite.  While Churchill's history is long, often contradictory and controversial, and even flawed, he was the leader Britain needed in her critical hour.  His courage, his persistence, and his dedication to the purpose of saving his homeland against the aggressive and evil Nazi regime proved that he was the right man for the right cause at the right time. He didn't hold anything back, nor make false promises. He knew the road to victory would be long, dark and bloody.
While history has yet to record what impact Cameron's speech may have on the future of the Western world, he did his part in stating the obvious:  “We are in the midst of a generational struggle against a poisonous and extremist ideology that I believe we will be fighting for years, and even decades.”  Does he stand alone in his bold pronouncements?  We, here in the U.S. apparently "have no strategy" yet, and the rest of Europe seems impervious to the impending peril of a robust, confident and violent Caliphate.
In light of Saudi King Abdullah's statement this weekend, other world leaders would serve their countries best by following Cameron's example.  King Abdullah warned, "If we ignore them (ISIL), I am sure they will reach Europe in a month and America in another month ... It is no secret to you, what they have done and what they have yet to do. I ask you to transmit this message to your leaders: 'Fight terrorism with force, reason and (necessary) speed'."
Cameron made it clear that he intends to do just that: "We’ve already taken a whole range of measures to keep our people safe. We are stopping suspects from travelling by seizing passports. We’re barring foreign nationals from re-entering the UK. We’re depriving people of citizenship and we are legislating so we can prosecute people for all terrorist activity, even where that activity takes place overseas... We’ve taken down 28,000 pieces of extremist material off the internet this year alone, including 46 ISIL related videos. We have made clear that those who carry ISIL flags or seek to recruit to ISIL will be arrested and the material seized."  Are you listening in the halls of Congress and at the White House?
Cameron also talked about shying away from sweeping new government powers that would hinder the freedom of British citizens, while strengthening the laws they do have.  I must admit that I have an aversion to anything that smacks of our own Patriot Act, and we will have to see if he is true to his word.  But I did like his remarks in which he stood up for, and championed, the British way of life: "Britain is an open, tolerant and free nation.  But we cannot stand by and allow our openness to be confused with a tolerance of extremism, or one that encourages different cultures to live separate lives and allows people to behave in ways that run completely counter to our values. Adhering to British values is not an option or a choice; it is a duty for those who live in these islands. And in the end it is only by standing up for these values that we will defeat the extremism, protect our way of life, and keep all our people safe."  A Leader of a country who extols its exceptionalism ... now that's a breath of fresh air!
In the end, I don't really know if Prime Minister Cameron will follow through on the promises of his spirited rhetoric.  And I am no political scientist; I can only hope that he is what he appears to be --- and history demands he be --- a man with the moral obligation to stop Evil.  But I do think that Cameron at least recognizes the very real threat that faces not only his country, but Europe, the West, and ultimately, the whole world.  Once again, as in 1940, a British Prime Minister must take the reins and lead his nation against a formidable force hell-bent on dominating the world.  Will Cameron be this generation's Churchill?  He needs to be.
The words of Churchill in his first speech as Prime Minister would serve Cameron just as well today:  "You ask what is our policy. I will say, it is to wage war with all our might, with all the strength that God can give us, to wage war against a monstrous tyranny never surpassed in the dark, lamentable catalogue of human crime.  You ask what is our aim? I can answer in one word: Victory. Victory at all costs. Victory in spite of all terror. Victory however long and hard the road may be. For without victory there is no survival."  May God hold back His righteous judgment just a little longer.

Psalm 94:16     "Who will stand up for me against the wicked? Who will help me against evildoers?"