The Manipulation Of The Masses

I wrote the last few posts prior to the Independence Day holiday, which has given me a few days rest from world events in order to enjoy family and some much needed down time.  But it has also given me a clearer outlook as I peruse the news sites.  When you allow your mind and your emotions some breathing space, the big picture seems to come into focus just a little sharper. 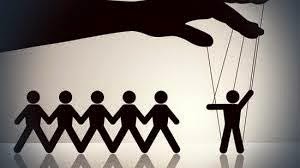 You see, it's easy to look at one issue or one development and zoom in on how it personally affects you.  I guess it's only natural in our self-absorbed world.  But as I took a quick glance at the top headlines, I began to see that circumstances around the globe all have one thing in common ... they are part of a global game to manipulate mankind -- to exploit and steer particular events in order to achieve the goal of domination and authority.
It is quite apparent to me that it is the age-old battle between freedom and enslavement.  It has been at the heart of our existence since the Garden of Eden.  Simply put, man traded the freedom of an open, personal relationship with his Creator, to becoming a slave to sin.  We've paid the price ever since, and are now engaged in a spiritual battle for the survival of free men.
You can see this battle in our own country as we are pitted against each other over the illegal immigration issue on our southern border.  Whether we realize it or not; whether we admit it or not, we are being maneuvered into position.  Through no choice of our own, we have been forced into accepting an unlawful influx of humanity that threatens to harm our safety, our health, the harmony of our communities, and most importantly, our rights as citizens.
Yes, we are called on as Christians to help the poor and the oppressed, and one cannot deny that those who have fled tyranny and persecution need our help and our acceptance.  But, this flood of immigrants appears to be a cunning orchestration of a more devious nature.  There is no obvious plan to help these unfortunates, and their welfare is not the central issue.  In fact, it is not even being considered!  This "campaign" has most certainly not been about loving your fellow man, and the result has been a tremendous lack of resources, the advent of disease, disruption of our national security, and conflict between citizens.
And let's not forget that the thousands of people flooding across our border are not exclusively the poor and downtrodden.  There have been credible witnesses that testify to the violent criminal gangs and foreign terrorists that are among the illegal immigrants.  Yet if anyone dares to mention this possibility, you are dismissed as a racist and bigot.
The Bible is very clear that citizens should never mistreat the "strangers" that live among them. However, just as sojourners in Israel were required to obey God's laws before receiving His blessings, the strangers among us should also be required to obey the laws of the land before receiving the same benefits and privileges that come to citizens.  Yet are we seeing any kind of order or lawfulness to this massive flood of immigrants?
But could this be the ultimate goal?  Wouldn't this be a great strategy if you wanted to create chaos and deny people the freedom to determine how their society would be conducted?  If you wanted to eliminate freedom, wouldn't you make the people slaves of a system that was out of control?
And it's not just happening here in America.  Whether you are viewing the upheaval in the Middle East and the emergence of the Caliphate, or the ongoing turmoil in the Ukraine/Russia conflict, the results are all the same ... to create an event(s) that is designed to disrupt the free will of men and to crush their spirits.  That is the very foundation of Good vs. Evil; of freedom vs. enslavement.
What we are seeing today is nothing new; these forces have been battling since the beginning of time.  But it seems to me that the Enemy has managed to engineer multiple fronts in this warfare.  There are hotspots all over the world where it threatens to spiral out of control and where rules of conduct and just laws do not exist.  And it has been carefully designed and directed to happen just as it is.  The masses find themselves at odds with their rulers and authorities, and the thought of peace and mutual tolerance seems fanciful.  The forces that are confronting us are becoming stronger and it is time we recognize that we are being handled in a very skillful manner.
We must not allow ourselves to be pushed into a corner or up against a wall.  We must not allow ourselves to be baited into a predetermined response or mindset.  We know the laws by which we must obey, and they are God's.  As formidable as these turn of events around the world might appear, we are not resigned for defeat or blind acceptance.  Keep an eye on the goal that God offers, not what the world's rulers are asserting.  The battle lines have been drawn, and it will be a fierce fight.  Just remember that we are designed for freedom not enslavement ... and Good will triumph over Evil.