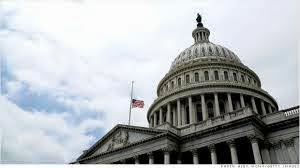 I  just love it when entrenched and power-hungry politicians try to use the Bible to support their agenda.  It doesn't matter that they never see the need to apply its principles and foundations at any other time; only when they can manipulate a concept or two to try to shame the susceptible public.
Such is the case when House Minority Leader Nancy Pelosi tried to influence public opinion about the humanitarian crisis at our southern border.  First of all, these politicians are very skillful at neglecting to mention the other crisis -- national security -- as they attempt to play upon the emotions of caring and concerned Americans.
Breitbart.com also points out that national leaders like Pelosi fail to mention the strain on our nation's financial resources.  Instead Pelosi announces on an MSNBC morning TV show that she "believes the U.S. government should look at the children like "baby Jesus," who she added "was a refugee from violence."  Why has no one bothered to correct her analogy?  Oh, I forgot ... she was on MSNBC and no one else in Washington probably knows the truth, either.
The truth behind her half-truth is this:  Yes, Jesus's parents, Joseph and Mary, were forced to flee Bethlehem to avoid King Herod's murderous rampage.  BUT, although they followed the instructions of the angel of the Lord and fled to a safer country (Egypt), they were told to remain there until they received further instruction.  When the violence had abated and the threat to the child was over, the angel told them to return back to their native land.  Jesus did not stay and become a citizen of Egypt.  Nor did his father seek a green card to stay in Egypt and reap worker benefits.
I know this is a cynical approach to Pelosi's comments, but I am tired of the misrepresentation by  these corrupt politicians and what they hope to accomplish.  I resent her subtle references to the $3,700,000,000,000 proposal the President has asked for the border crisis.  She claims that, in Washington, she sees "an embrace of the idea that this is a humanitarian crisis by people who are not politicizing the issue. What we need to do is have the supplemental that gives us the resources to meet the humanitarian needs, to do the border control, but also to have the judicial piece so that these children have representation and judges to hear their cases. those who have a right to stay, whether it's refugee status or asylum."
TRANSLATION:  We, in Washington -- especially those of us on the Left -- are smarter and more compassionate than the hateful, bigoted people (and their elected representatives on the Right) who oppose these poor, innocent "Border children", as they are now being called.  Furthermore, we need that money to 1) help these unfortunate children and "to do the border control" -- whatever the heck that's supposed to mean!  Why don't you elaborate, Nancy?  Do you mean calling out the National Guard? Hiring more border agents? Checking IDs and stopping the criminal and terrorist elements from invading our country?  Or is that just an inane slogan for something you have no intention of addressing?  Finally, she claims they need the money for "the judicial piece"; these children to be legally represented in our courts of law, don't you know?   Notice that she never offers the other solution ... return them to their native countries!
Or could she really be referring to what TheBlaze.com has reported:  the Senate-passed immigration bill would create millions of new green card opportunities for non-U.S. citizens — about 30 million over the next decade.  As Senator Jeff Sessions noted, the Senate bill could allow almost every Central American family to enter the U.S. legally. How is this nation going to be able to afford that kind of immigration surge?
But that's not the only sneaky thing this proposed bill seems to be about.  Senate Majority Leader Harry Reid has accused Congress of adding to the crisis by not immediately passing this emergency spending bill, saying if Congress doesn't act to supplement border activities, they are going to run out of money by the end of August.  But the Congressional Budget Office (CBO) reports that "only $25 million would be spent during the rest of FY 2014, which ends in September. Most of the rest of it would be spent in 2015, and spending would continue through 2020.  In addition, all of the spending in 2014 would take place in the Department of Health and Human Services. Obama’s plan would give the Department of Homeland Security $1.1 billion, but none of that money would be used until FY 2015."
So why the rush for this money, if it does not appear that the bulk of it goes towards immediately solving the border crisis issues?  And is any of this money to be used for the expenses of sending any of these children back home?  Or is that not really even part of the consideration?  That has to be part of the conversation... we simply cannot continue the border calamity as it exists.
But I would respectfully ask all politicians to stop insulting my intelligence and my faith.  As a private citizen, I have contributed tithing money to Christian organizations that I know are seeing to the humanitarian needs of these children as best they can.  And as a taxpayer, I will be contributing money as my state spends millions to alleviate the security issues that we face.  But please do not use the holy and precious name of my Lord and Savior in your vacuous arguments.  You not only offend me, but you show a remarkable lack of knowledge and judgment.