"Free Of Christians" Is The Goal

Oh, how I hope that somehow this message will be heard in the souls of Christians world-wide.  Our brethren in Iraq need our intercessory prayer in this very hour!  Patriarch Louis Raphael I Sako, who is the leader of the Chaldean Catholic Church in Iraq, is responsible for some 500,000 believers.
SIDE NOTE:  The history of the Chaldean Church is quite fascinating.  Established in the first century, it has endured Persian rule and then the persecution by the pagan Roman Empire.  Once the Roman Empire adopted Christianity, the Church flourished and was a very active missionary force as it expanded into India, Tibet, China, Mongolia, and perhaps even Korea and the Philippines. This activity continued even after its Mesopotamian homeland was conquered by the Muslim Arabs. Indeed, the Church was nearly annihilated by the Mongol invasions of Tamerlane.  In the mid-1500s, the Chaldean Church sought a union with the Catholic Church in Rome.  Their overtures were accepted by Pope Julius III in 1553, creating the Chaldean Catholic Church now centered in Baghdad.  (From the Catholic Education Resource Center.)
Breitbart.com and Christian Broadcasting Network are reporting that Patriarch Sako has issued an open letter and an appeal “to all who have a living conscience in Iraq and all the world.”  His letter to the world calls upon all those who have a voice and a concern for Iraq, and for "all protectors of the dignity of human beings and of religion" to take notice. 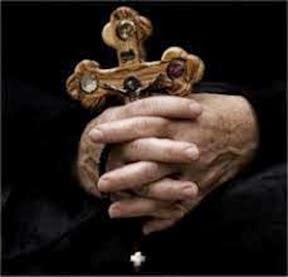 But this ancient Church, and believing Christians, who can trace their Christian heritage for thousands of years, are now being threatened with their very existence.
In his announcement, Patriarch Sako comments on the anxiety and disquiet in the land as the jihadist ISIS group proclaims its control of the city of Mosul, and the establishment of the Islamic Caliphate.  But more specifically, he writes of recent events:  ".... the announcement calling all Christians and clearly asking them to convert to Islam or to pay the jizyah (the tax all non-Muslims must pay while living in the land of Islam) – without specifying the exact amount. The only alternative is to abandon the city and their houses with only the clothes they are wearing, taking nothing else. Moreover, by Islamic law, upon their departure, their houses are no longer their properties but are instantly confiscated as property of the Islamic state."
His next words strike a deep fear in my heart:  "In recent days, there has been written the letter ‘N’ in Arabic on the front wall of Christian homes, signifying ‘Nazara’ (Christian), and on the front wall of Shiite homes, the letter ‘R’ signifying ‘Rwafidh’ (Protestants or rejecters). We do not know what will happen in future days because in an Islamic state the Al-sharia, or Islamic code of law, is powerful and has been interpreted to require the issuance of new I.Ds for the population based on religious or sectarian affiliation."  Just as in the days of Hitler, God's people are being singled out for destruction, and religious affiliation is used as a weapon to deceive and separate.   Satan is using his same old playbook to wreak havoc upon mankind.
CBN.com reports and confirms Patriarch Sako's letter: "According to MidEast Christian News, the ISIS rulers ordered hospitals to dismiss Christian doctors and female employees. The report says extremists also marked the houses of Christians as 'Property of the Islamic State'.  By the time the midday Saturday deadline imposed by the Islamic State expired, most Christians were gone.  Mosul, where Christianity has existed for nearly 2,000 years, was now virtually "free of Christians"."
Unfortunately, my spirit tells me that Patriarch Sako's pleas to his radical Muslim countrymen to respect "the civilization, the cities, and the heritage" that they have built together, will fall on deaf ears.  The members and leadership of ISIS do not share his desire to "respect innocent and weaponless people of all nationalities, religions, and sects."  They have one goal in mind:  conquering Iraq for their brand of Islam, and destroying anyone that gets in their way.
The hatred against Christians and Jews is mounting throughout the world.  We might possibly see the end of Christianity in this part of the Middle East.  But we should not be surprised.  In His Word, Jesus does more than imply that His followers may suffer persecution, he says they will persecute you.  (John 15:18-20).  And His revelation to the Apostle John encourages us to endure what is coming.  The persecution is most acute in foreign lands, but make no mistake --- we must prepare for it as well.  And we must remember that whatever the Enemy means to use for his evil, it will ultimately benefit God.
So let's join Patriarch Sako and other ministers of the Word around the globe, who are all suffering persecution in the Name of Jesus.  Let us answer the desperate cry of the Christians in Iraq and Sri Lanka and the Sudan with our own prayers for their protection and strength in the face of unspeakable persecution.  We hear you!  And let us pray, that when it is our turn, we will view our suffering with joy, because through our solidarity in His love, we may endure our trials and see them as opportunities to glorify our Lord.