The Meaning of "Asparagus" and The Demand for Accountability 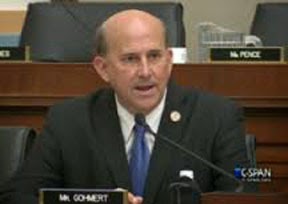 By now you have heard of the rancorous exchange between the Attorney General of the United States and a sitting member of Congress.  During a House Judiciary Committee Hearing, Texas Representative Louie Gohmert dared to point out that Attorney General Eric Holder seemed not to take his "held in contempt" status very seriously.  “I realize that contempt is not a big deal to our Attorney General, but it is important that we have proper oversight."
In case you've forgotten, considerable time has elapsed since Eric Holder was held in contempt of court for not complying with the House's request for documents concerning the Fast and Furious gun debacle --- two years to be exact.  So Gohmert's assertion is not without merit.
You could almost see the sparks fly from Holders eyes!  “You don’t want to go there, buddy!” Holder responded. “You don’t want to go there, OK?”  Now, I ask you, does this remark sound appropriate coming from the chief law enforcement officer, and chief lawyer, of the United States government?  Or does it sound like someone who views himself above reproach?
Because I would like to remind Mr. Holder, that while he serves at the discretion of the President, he  is also under the purview of Congress, and subject to impeachment by the House of Representatives and trial in the Senate for "treason, bribery, and other high crimes and misdemeanors." In other words, he ultimately answers to Mr. Gohmert, and the Representative is due his respect.
Instead, Holder chided Gohmert for his opinion regarding his lack of attentiveness to the Fast and Furious scandal.  He then proceeded to let Louie know that he thought the contempt charge was both inappropriate and unjust; it was indeed a big deal to him.  (But I think we should consider the reason he thought it was a big deal.  Was it because he held a high opinion of Congress and their oversight?  Or was it because it offended his ego?)
Gohmert was undeterred.  He reminded the Attorney General that his comment was justified in that the Justice Department has still not produced the documents related to that specific contempt charge.  “I’m just looking for evidence, and normally we [Congress] are known by our fruits and there’s been no indications that it was a big deal because your department still has not been forthcoming in producing the documents that were the subject of the contempt."
Shortly after, Representative Gohmert's time was up in the hearing, but Holder managed to slide in one more derogatory comment:  "Good luck with your asparagus."  Now, many in the media were only too happy to point out this reference to what they thought was Gohmert's verbal stumble back during the 2013 conflict with Holder, in which he said,  "The attorney general will not cast aspersions on my asparagus!"  That comment got lots of attention on the late night comedy shows and across the MSM.  But the joke is on them ... and the Attorney General.
Gohmert has since explained that he was quoting a formidable Texas criminal defense attorney, by the name of Percy Foreman.  “Percy was a very, very liberal criminal defense attorney, but he was incredible in the courtroom,” Gohmert said. “When somebody started attacking his integrity, he stood up and said, ‘I object, he’s casting aspersions on my asparagus!’ And people would scratch their heads, but it brought down the level of the rancor.  I was using a Percy Foreman line from criminal trials back probably 50 years ago.”
In other words, Representative Gohmert was showing that he would not be intimidated or ridiculed; nor would he allow anyone to goad him into an argument that would disgrace or cheapen a Congressional oversight committee hearing.  In effect, he was defusing a potentially explosive situation, and above all, doing his job --- the job that we, here in Texas, sent him to Washington to do.  Yet, AG Holder held on to that comment for a year, waiting to throw it back at the Representative!
I think it is evident that the AG's response was not only way off the mark, but a sign of his character; his level of anger and desire for revenge; and his lack of respect for anyone but himself.  Appointed officials of the government must be held accountable for their actions.  Yet, in a speech following his dust-up with Gohmert, Holder remained adamant that congressional critics had launched “unprecedented, unwarranted, ugly and divisive” attacks on him and the Obama administration. 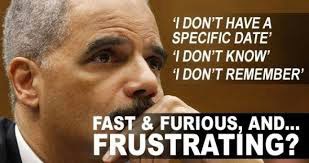 But here is what he doesn't get ... the members of the various committees he has appeared before, and the American people, simply want the truth.  Why won't he provide the documents?  What are they afraid of?  There have been some serious allegations about complicity with known terrorist affiliated groups, and Representative Gohmert and the Judicial Oversight Committee are acting on our behalf in trying to get the answers.
So the AG can rail about the pressure and the frustration he feels, but that does not excuse him from maintaining his stall tactics and refusing to answer the questions.  He is required and expected to justify his actions as Attorney General!  Yet he has not done that.
In fact, testifying on the Hill about his prosecutorial duties in upholding the law, Holder said, "There is a vast amount of discretion that a president has - and, more specifically, that an attorney general has."  I would hate to assume that he means he can do whatever he wants, regardless of Congress or the law.
I applaud Representative Louie Gohmert for his fearlessness and his respect for the American people.  He boldly proclaims that the Executive Branch of the Government must be held accountable, because we are at a "tipping point" in this country. Will we able to keep the republic, as Benjamin Franklin warned us?  When told by Glenn Beck, during a radio interview, that the country is praying for him, he humbly replied, "If anyone is tempted to pray for me ... I don't need courage. My problem is Wisdom.  Pray that I will have wisdom, and know when to fight and when to back off."  Mr. Gohmert, you keep on fighting, and we will keep on praying for you.  Thank you for standing up for us!

Ephesians 5:15-17    "Look carefully then how you walk, not as unwise but as wise, making the best use of the time, because the days are evil. Therefore do not be foolish, but understand what the will of the Lord is."