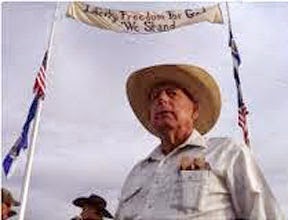 As I was sitting here contemplating my thoughts on the confrontation between a Clark County, Nevada ranching family, and the overzealous Bureau of Land Management, the news came on the TV that the BLM was ceasing its operation of confiscating the family's cattle.
If you've been following this contentious situation, then you know that there has been some controversy over the grazing fees that the government has been charging Cliven Bundy and his family.  But first, you might like to know exactly how this arrangement works.
The Bureau of Land Management administers about 245 million acres of public lands, and manages livestock grazing on 155 million acres of those lands, as guided by Federal law. The terms and conditions for grazing on BLM-managed lands (such as stipulations on forage use and season of use) are set forth in the permits and leases issued by the Bureau to public land ranchers.
Supposedly, all this regulation was necessary due to the degradation of the public rangelands.  So the government became in charge of how many head of cattle or sheep ranchers could graze on their allotted leases.  In government speak, it sounds like this:  the Feds balance forage demands with the land’s productivity (“carrying capacity”).  You might think that's a good thing, until you realize there's more to it.
In the 1960s and 1970s, Congress decided they needed to "manage" these public lands even more strigently.   So they passed such laws as the National Environmental Policy Act of 1969, the Endangered Species Act of 1973, and the Federal Land Policy and Management Act of 1976.  And in 2014, this over-regulation by the Federal government came in direct conflict with a Nevada rancher, whose family had ranched that land since 1870, and he had had enough.  For him, it is the 10th Amendment that is at the heart of the argument.  For the BLM, it is Bundy's unpaid land use fees, totalling more than $1 million. Bundy said he doesn't have to pay because he has no contract with the federal government.
As reported by SHTFPlan, Bundy said, "The first thing we need to make clear is – who owns this land? That’s really not clear. We have a federal judge that says the United States owns this land. We have the United States Constitution that says Nevada owns this land.  So this is where I’m at… Let’s talk about my grazing fee… who am I supposed to pay my grazing fee to? Constitutional sovereignty of Nevada that owns this land?  No. The one I get the grazing fee bill from is the United States government.  I don’t recognize them having any jurisdiction or authority over this land.  I do not have a contract with the United States government.  …I urge you, read the Constitution. Those Founding Fathers laid out how we’re supposed to act. They have all the answers already laid out for us. Why don’t we live that Constitution and be happy in America?" 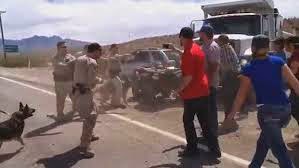 After days of a tense stand-off in which one of Bundy's sons was arrested, another tasered by Federal agents, and protestors were surrounded by snipers, all I could think of was, "Please dear God, not another Ruby Ridge!"  But technological developments since 1992 assured that no sneak attack would happen this time.  Cell phones and video cameras were recording every minute of this tense exchange.  And I guess Clark County Commissioner Tom Collins has never heard of Facebook... or else he would never have called those who travelled from Utah to stand with the Bundy's "inbred bastards"; or advised them "to have your funeral plans".  I wonder when his re-election is coming up?
As protestors and supporters from across the West joined the 67-year-old rancher and his family, I feared the worst.  Was this being orchestrated so that the government could show its muscle?  It was clear from the beginning that Bundy and his family were not going to back down, and those that joined them were equally adamant that this was a fight they did not want, but would not concede.  They did not, and the Feds wisely decided to end their operation of coercion and leave the area.
But that's not the end of the story.  As always, we must "look behind the curtain."  While the 10th Amendment and personal liberty were front-and-center in this showdown, it is alleged that something more was at stake than overdue grazing fees.  Oh, yeah, it was EPA's concern about the protection of the “desert tortoise.”  They really expected us to believe that?
If you just peel back enough layers, you will usually find the ugly truth.  InfoWars posted an article in which they said that a BLM document was removed from the BLM.gov website, in which it was stated, “Non-Governmental Organizations have expressed concern that the regional mitigation strategy for the Dry Lake Solar Energy Zone utilizes Gold Butte as the location for offsite mitigation for impacts from solar development, and that those restoration activities are not durable with the presence of trespass cattle.”  Guess whose cattle “impacted” solar development and are viewed as "trespassing"? More specifically, they are standing in the way of the construction of “utility-scale solar power generation facilities” on “public lands.”
It has also been alleged that none other than Senator Harry Reid and his son, Rory, were heavily involved in plans to build a $5-billion solar plant on public land in Laughlin, Nevada.  And, Rory Reid, was the chief representative for the Chinese energy firm building that plant.
And if that's not enough to get your goat, the BLM director, who would have been involved with purging the above document entitled "Cattle Trespass Impacts" was Senator Reid’s former senior adviser!  (I guess I have a hard time understanding why this scoundrel continues to get re-elected!!)
So what happens, going forward?  Is the BLM really going to throw in the towel and just walk away.  Is this really a win for Liberty?  There is still the question of what has happened to the Bundy's cattle that were removed?  The BLM has refused to say if they had been euthanized after the removal.
While the government maintains that Bundy still owes over $1 million in grazing fees, and said they would “continue to work to resolve the matter administratively and judicially,” that probably means continued long court battles for the Bundy family.  For now, I am grateful to those who had the foresight to avert what would have most certainly resulted in violence and tragedy.  I am also proud of those Westerners who stood their ground and exhibited the courage and tenacity that their pioneer forebears instilled in their DNA.
Unfortunately, I fear that this will not be the last of such showdowns between citizens and our government.  It is obvious that the Constitution is still revered among many of us, although it is certainly being tested and torn apart.  I pray that God sees that there is still a remnant that cherishes our "God-given rights", and that He will seal us and protect us from the future trials that are coming our way.  We avoided a huge tragedy this time.  May His hand ever guide us.

Psalm 1:1-2    Blessed is the man who walks not in the counsel of the wicked, nor stands in the way of sinners, nor sits in the seat of scoffers; but his delight is in the law of the Lord, and on His law he meditates day and night.