The Devil Is In the Details 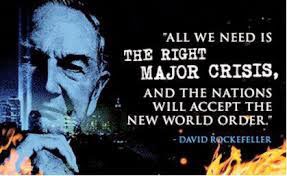 Today's post is kind of a fast-forward from yesterday's thoughts, and shows what we have reaped from not paying attention to who has been running the country.
I ran across an interesting article on the website for Dave Hodges' Common Sense Show.  In the article, he presupposes that there is indeed a secretive power elite (called the New World Order) with a globalist agenda, conspiring to eventually rule the world through an authoritarian world government.  Of course, they can only accomplish their goal by replacing sovereign nation-states through carefully orchestrated events and propaganda that present this agenda as the natural progression of human history.  Got that?
Ok, Mr. Hodges suggests that there are five "variables", or factors, that these global elites must control in order to suppress an individual's or nation's freedoms.  Let's take a look at these factors, and his hypothesis on each one, and see if this is/could happen in America.

Factor #1:  The Media:  Six corporations control 98% of the media. These same six corporations virtually control everything that most people see, hear and subsequently believe. The CNN’s and FOX networks have successfully turned the majority of our people into sheep who are willing to accept any form of dictatorship so long as it is endorsed and glorified by the news media.
I must admit that I know far too many people who take the so-called "news reports" from CNN, MSNBC and FOX as "the gospel".  "I heard it on FOX News" is often their confirmation that they've heard the truth.  What they don't understand is that the powerful men that own these corporations, also control the narrative that the talking heads spew.  Don't be fooled!  These men have their own agendas, which are mirrored by what, and how, "news stories" are reported.  The reporters are not necessarily independent journalists and are, more often than not, hired lackeys of their commanding bosses.
The hope we have lies in the alternative media that consists of independent researchers and bloggers who owe their allegiance to no one.  We must be discerning in accepting their "facts" as truth, but for the time being, they provide an influential option to the ever-declining state-run media.
Factor #2:  Social Factors:   The majority of Americans still believe in hard work, their religion and traditional family values which honors the sanctity of marriage as defined in the Bible. Through the control of the media and an increasing control of the government, Americans are being forced into glorifying every form of behavior, previously considered to be perverse and the traditional values of the American family are under attack by the media, Child Protective Services and the education system.
It doesn't seem that long ago that everyone shared a "let bygones be bygones" social philosphy ... as long as we didn't inflict physical harm upon each other, Americans were willing to be tolerant of different opinions about lifestyle choices.  But now there is developing a deep divide in this country, and an extremely vocal minority is demanding, in authoritarian ways, that everyone should adopt their ideas and ways.  Instead of truly following a policy of "freedom of choice", we (the Christian conservatives) are being forced to comply with the intolerant dictates of those who once blamed us for intolerance.
But the one thing that these social tyrants, whether Elite or not, cannot control is our minds and hearts.  They may pass laws that restrict our actions, but they can never legislate our values and our morals.
Factor #3:  Economics:  One unelected entity controls the nation’s banks, The Federal Reserve. The same people control all governmental legislation for all economic policies including the Stock Market. When the super elite get caught with their proverbial hand in the cookie jar and suffer major economic losses, they simply steal from the people and call it a bail-out. As a result, we have had the bail-out, the son of bail-out and the grandson of the bail-outs.
We cannot deny that since The Federal Reserve's inception in 1913, the dollar has never been the same.  And now they have themselves backed into a corner with all the money they have printed.  There are all kinds of scenarios that the so-called conspiracy theorists (but are they right?) suggest .... Russia, China and India will soon be purchasing Iranian oil in gold and bypassing the dollar as the only medium of exchange (i.e. the Petrodollar);  this will lead to false flag provocations both abroad and at home, which will result in martial law and the global suppression of citizen opposition.  The NWO would be ushered in!
If this scenario is true and plays out, it will be more important than ever that individuals be prepared with long-term food storage and survivalist plans.  The longer you can keep from being sucked into their system of control by growing your own food and trading and bartering, the harder it will be for them to force you to "get in line".
Factor #4:  Military:  If the super elite have made serious miscalculations on the path towards establishing a New World Order, the handling of the American military is a prime example.
From all appearances, the American military offers us a semblance of hope against the designs of the NWO.  But that will only last as long as each service man and woman holds tightly to their oath of defending the Constitution.  One cannot ignore the struggle for the heart and soul of our military when we see the firing of over 260 senior command military officers, and the downsizing of the military to pre-WW II numbers.
Do the young recruits embrace (let alone know) the proud history of our military?  Will the American people continue to support our returning veterans and stand shoulder to shoulder with them to defend this great nation?  The NWO cannot succeed if the Military stands strong and unwavering.
Factor #5:  The Government:  The NDAA, Executive Order 13603, the Patriot Act, NSA spying, the use of the election fixing electronic voting machines, force feeding us GMO’s, the punishments of whistleblowers, the alleged militarization of the law enforcement, the corruption in the halls of Congress, and so much more ....  all lead to a NWO-like conclusion.
Our national election process is due for some massive changes.  Term limits would be a good start.  But it's obvious that our political process is drowning in misconduct, profiteering and criminality.  The Elites pre-determine our next Leader, and the people's voice is discounted.
Now all that is changing with the advent of active grassroots organizations and bold Americans who are becoming involved in their government for the first time.  We need new voices and fresh blood!

Ultimately, we need to realize that it doesn't matter if you actually believe Dave Hodges and subscribe to his theory of a New World Order, or an elite group of people who seek global control.  The truth lies within the pages of the Bible.  The Good Book tells us that such a time will come and the real key to defeating these powers is for this nation, and all peoples of the world, to turn back to God.  Because, in case you don't realize it, the entities behind the NWO are the Enemy's elect; they are doing his dirty work.  Can't you see his fingerprints all over their agenda?  And we need to remember that even if it looks as if they are defeating us -- that the Enemy's plan is taking hold -- there is always a remnant that will never give in, never consent, and never surrender.  There is always hope!  Let others take their marching orders from the Fallen One; I will play by God's rules and victory will be mine!!

Romans 8:38-39      "For I am convinced that neither death, nor life, nor angels, nor principalities, nor things present, nor things to come, nor powers, nor height, nor depth, nor any other created thing, will be able to separate us from the love of God, which is in Christ Jesus our Lord."