Does Texas Represent The Country?

The Primary Elections are upon us, and none has been pontificated upon more than the Texas Primaries. It didn't matter which side of the political spectrum you found yourself ... all eyes were on Texas.  There has been lots of talk about money pouring into the state in the hopes of turning Texas from a red state to a blue one.  I suppose that those who embrace the Progressive, Socialist ideology would like nothing better than to see this stronghold of Conservatism brought under their control. 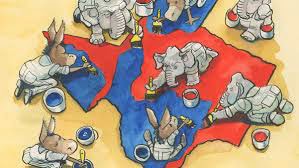 While most of the talking heads have concentrated their focus on the Tea Party influence (which election results proved to be substantial), I was less interested in the candidates.  Don't get me wrong, I was thrilled to see that the candidates endorsed by Ted Cruz were pretty much winners across the board.  But I have been disappointed in candidates before, and I'm not likely to put my trust in elected officials so easily.  No, it was the Ballot Initiatives that caught my eye, and I can truly say that I am proud of what is important to those who wish to represent us.
Usually, when you get to the bottom of the ballot, there are any number of Propositions that are vague and ill-written; you're not exactly sure how this would affect you and therefore, you have no idea  whether you are "for" it or "against" it.  Not so, this election.  The Republican Party ballot offered six resolutions to be considered for the party's platform and possible legislation.  These were considered important enough to bring to the citizenry and to be placed on the general primary election ballot.  I got more excited with each one that came into view.  Here they are in all their glory:
1.  Texans should be free to express their religious beliefs, including prayer, in public places.  IN FAVOR:  97.2%.
2.  Texas should support Second Amendment liberties by expanding locations where concealed handgun license-holders may legally carry.  IN FAVOR:  86.92%
3.  Texas should abolish the state franchise tax, also known as the margins tax, to encourage business growth.  IN FAVOR:  88.47%
4.  Texas recipients of taxpayer-funded public assistance should be subject to random drug testing as a condition of receiving benefits.  IN FAVOR:  94.9%
5.  All elected officials and their staff should be subject to the same laws, rules, regulations, and ordinances as their constituents.  IN FAVOR:  99.36%
6.  The Affordable Care Act, also known as “Obamacare,” should be repealed.  IN FAVOR:  93%.
It's fairly obvious that we, here in the Lone Star state, believe in the First and Second Amendments; growing the Economy; holding Welfare recipients accountable; holding the Legislators accountable by making them abide by the same rules as the People; and we don't want anything to do with Obamacare.
Hmmm .... those ideals don't come anywhere close to coinciding with the Progressive agenda.  In fact, I think it's safe to say there is nothing about these results that will endear us to the Left.  No wonder all the might and power of the Elites is headed our direction!  As we say, here in Texas, "It's fixin' to be one helluva fight!"
So, I would ask the rest of you across the nation -- and the world -- to pray for us in Texas.  I don't expect this to be a "gentlemanly", fair, or moral campaign.  In fact, it's likely to be an all-out brawl for the soul of this great state.  But let me remind you; if we fail to fight off this incursion, the rest of you will be ripe for the pickin'.  So I ask you to stand with us and fight the good fight.  The heroes of Texas history once drew a line in the sand at the Alamo.  This time, we are using the ballot box to defend our freedoms, and may God be the tip of our spear.

Galatians 5:1    "Stand fast therefore in the liberty by which Christ has made us free, and do not be entangled again with a yoke of bondage."
Posted by Pam Kohler at 7:00 AM