A faithful reader sent me a link from CBC News in British Columbia that announced the first child with three parents listed on her birth certificate.  And it seems that this child not only has multiple parents, but multiple names to go along with her new status.  Della Wolf Kangro Wiley Richards is the daughter of lesbian parents and their male friend.
British Columbia has enacted a new Family Law Act, which came into effect last year, and allows for three or even more parents.  So when Danielle Wiley (and her wife Anna Richards) engaged the help of Shawn Kangro to become pregnant, in what they described as "the homestyle method", it was important to them all that Kangro be an active participant in "the family".
First of all, let me say that, after reading the article, I do not for a moment doubt that these three people love this child and are committed to providing the best for her from their arrangement.  But as far as I can tell, my computer's New Oxford American Dictionary definitions of "wife", "parent" and "family" do not apply to this situation.  (Of course, very soon, I fully expect these same definitions to be annulled in the face of societal pressure).  But for now, let's consider the "official definitions":
•  Wife:  a married woman considered in relation to her husband.
•  Parent:  a father or mother.
•  Family:  a group consisting of parents (see above) and children living together in a household. 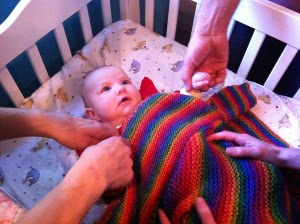 What is interesting, is that these two women acknowledge that a father was important to this equation.  "Both of us, from the beginning, wanted to have a father that would actually be a participant," said Wiley.  "Both of us liked the idea of somebody who could actually be involved, and who could be a father figure to our children." When Kangro agreed to accommodate the women, the three began creating the contract that would specify how their family would work.  Wiley and Richards would have custody of Della, as well as financial responsibility.  Kangro would be a guardian, with rights to access.
Their lawyer, barbara findlay, who spells her name without capital letters (what's up with that?), helped them navigate the legal system.  "Up until now, a child could only have two legal parents; There is now an upper limit of — we won't know how many parents. There's provision for at least four parents, and possibly more."
So, does anyone see the potential problems with this arrangement?  A child can have a potentially unlimited number of parents?  Who sets the boundaries of behavior?  It's hard enough to come to a consensus between two people, let alone 3, 4, or more!  The family structure is being redefined to be anything anyone wants it to be... all you have to do is write your own contract. 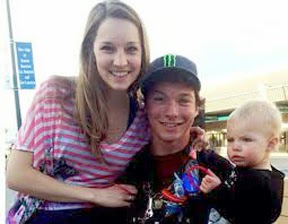 Now, let's compare the praise for the freedom this new Family Law Act gives in defining a family, with how Olympic Gold Medalist, David Wise's family is described.  NBC Sports' headline reads:  "David Wise's Alternative Lifestyle Leads To Olympic Gold."  Just what is this "alternative lifestyle"?  The article goes on to tell us:  At only twenty-three years old, he has a wife, Alexandra, who was waiting patiently in the crowd, and together they have a two-year-old daughter waiting for them to return to their home in Reno, Nevada.
So NBC feels it has the authority to declare that a husband, wife, and their biological child are now considered "alternative".  Just how mixed up will the children of this generation become?  It is not lost upon me that David Wise also reveals that he attends church regularly and says he could see himself becoming a pastor a little later down the road.
God is the obvious dividing line in this social evolution.   I won't even present the argument that the Bible defines marriage as one man, one woman.  If you don't believe in the Bible, you won't consider that this union defines the family.  But even if you only believe in "Mother Nature", everyone knows that a child cannot be born without a sperm and an egg.  Two eggs can't accomplish an embryo; and neither can two sperm.  So, doesn't that necessarily mean this is the "natural" plan, or system, in the well-ordered Cosmos?
I applaud Danielle and Ann for recognizing that a father is an essential element in the family dynamics.  But when you limit him to the role of "guardian", or father "figure", you diminish his essential role in the creation of that child.  He is more than someone with "rights to access".  He is an important figure in that child's ongoing development; a protector, a defender, a teacher.  We have two sexes for a reason; each brings something vital to the union and the family unit.
My fear is that the further we go down this road, and the further we stray from our Creator's plan, the more we will become confused about who we were designed to be.  This family structure has worked for hundreds of thousands of years.  What arrogance to think that we, in the last 10-15 years, have a better plan.

Romans 1:22-23      "Professing to be wise, they became fools, and changed the glory of the incorruptible God into an image made like corruptible man."

Email ThisBlogThis!Share to TwitterShare to FacebookShare to Pinterest
Labels: Family