I've been waiting for more reports to come out on this incident, but everything is quiet on the news front.  Did you know that on April 16, 2013 six men launched an attack on a critical power station in California?  Apparently, someone accessed an underground vault housing fiber optic telephone cables and cut off communications to a large Pacific Gas & Electric Company substation outside San Jose, California.  Then, for 19 minutes, someone opened fire from long-range, with the attack consisting of hundreds of AK-47 rounds being unleashed on 17 large transformers.
None of the transformers exploded, but the damage was significant enough for PG&E to force their electricity feeds to reroute through another station in an effort to prevent a widespread blackout. 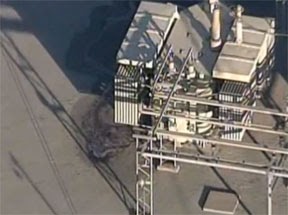 As you might expect, it was first written off as "vandalism".  Now, whether that was a blatant attempt at subterfuge, or law enforcement officials were fooled that easily, has not been established.  But according to SHTFPlan and Newsmax, the shell casings found at the scene had been wiped clean of fingerprints.
Flash forward ten months, and we now have a Wall Street Journal article, in which Jon Wellinghoff, then-chairman of the Federal Energy Regulatory Commission (FERC), termed the almost hour-long attack on the facility, "the most significant incident of domestic terrorism involving the grid that has ever occurred."  He goes on to say that he believes the episode might be a dress rehearsal for a bigger attack.
Now don't you think that the American public should be made aware of this, whether it was "vandalism" or a full-blown terror attack?  Don't you think we should know just how vulnerable our grid system is?  Oh, that's not necessary, THEY will tell you; the FBI is "sifting through evidence" and they aren't concerned about a terror attack.  So, Mr. and Mrs. John Q Public, just go back to your normalcy bias.  We'll take care of everything.
But wait a minute, didn't the WSJ report that it looked more like the handiwork of professionals who had done advance preparation and reconnaissance?  And didn't it take 27 days to repair the damage and bring the substation back on line?  Considering the fact that there are about 2,000 massive, custom-built transformers around the country; and that they are pricy and hard to replace --- couldn't a highly coordinated attack on even a small number of these transformers result in prolonged outages, and a major disruption in our economy and lives?  A couple of days are manageable, but if the right equipment were to be targeted then it’s possible that repairs would take up to 18 months because many transformer components are sourced from foreign nations and have long build times.
As if cyber-attacks are not enough to bring down the grid(s), we now know that our energy facilities are easily penetrable!  And it should not be surprising when you hear the response from one of the local PG&E spokesmen:  “[Vandalism] is how we typically categorize incidents where other people damage our facilities."  So they let it go at that!  Confident that we're protected, now, aren't you?
Fortunately, although considerably late in following up, then-FERC Chairman Wellinghoff heard about the attack on the substation and he flew to Silicon Valley to assess the situation, not just with energy grid experts, but with criminal experts, namely personnel from the U.S. Navy’s Dahlgren Surface Warfare Center in Virginia, which trains Navy SEALs.  After walking the site with PG&E officials and FBI agents, Mr. Wellinghoff said, the military experts told him it looked like a professional job. “They said it was a targeting package just like they would put together for an attack,” Mr. Wellinghoff said. 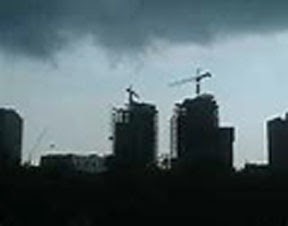 So what's happened since then?  Well, just a couple months ago, in December, The Blaze reported that Dr. Peter Vincent Pry, who served on the Congressional Electromagnetic Pulse Commission which was charged with studying all EMP threats that could threaten the American way of life, said calling the California event a “dry run” is accurate.  “In military and terrorist operational planning, an exercise or dry run deliberately stops short of destroying the target or achieving the maximum outcome because you do not want to alert the adversary,” Pry said. “You want the victim to remain vulnerable to a surprise all-out attack, most likely a much larger and more ambitious attack.”
The response from PG&E was anemic, at best.  They will improve their security by deploying advanced camera systems, enhanced lighting and additional alarms at the substation in San Jose that was attacked, as well as others.  Of course, the utility is considering a rate increase to pay for the security enhancements.
Yet, with all this circumspection, are we likely to see any shoring up of our national electric grid system?  Don't hold your breath!  The fact is that our infrastructure is outdated and exposed. It will not be repaired any time soon because the costs run into the hundreds of billions of dollars.  (And we have wars to run, farms to subsidize, welfare recipients to fund, and health insurance to underwrite).
But we cannot ignore such warnings as those coming from Jim Woolsey, Former CIA Director, who said that though experts on the threat have been warning of potential terror attacks on the electric grid for years, many people – reporters and users included – just choose to ignore it.  “Without electricity we aren’t a civilization, and this is a major societal vulnerability” Woolsey said.  To show the absolute absurdity of the government's ostrich-like refusal to act on this vulnerability, Woolsey related this opinion:  “So many people lecture me … about how this is not an officially sanctioned threat … (laugh) as if what matters is whether a government bureaucracy has made a finding or not, when somebody steps out next to a transformer farm and blasts away with an AK-47.”
So, it comes down to what we've known all along ... the only real option for Americans is to expect that such an event is coming, and to prepare for it.  In light of the event in California, it's time to take this situation seriously.  Frank Gaffney, of the Center for Security Policy, claims that 9 out of 10 Americans would die within a year of the electricity going out.  If nothing else grabs your attention, then this statistic should.  Food supplies, water, medical supplies, and a well-researched preparedness plan are essential NOW.  The enemy has had 10 months to perfect their plan.  They've already shown they can accomplish their goal; can you accomplish yours?

John 12:35    "So Jesus said to them, "The light is among you for a little while longer. Walk while you have the light, lest darkness overtake you. The One who walks in the darkness does not know where he is going."