Why I'm Focusing On The Ukraine

If you are like me, you are living hectic lives, trying to balance your spiritual life with your physical life.  There are so many sounds and images that assault our consciousness; most of it expressing conflict and dissension across all facets of our life, including politics, religion, social issues, and economic matters.  And it's worldwide!  We don't have the time nor the desire to know all that we should about these discourses, but every once in a while, there is one particular issue that persists at the back of your mind.  It won't leave you alone, and you know you should pursue it; you are supposed to learn something from it.  For whatever reasons, I kept coming back to the situation in the Ukraine, and what I have learned has, I think, profound implications for us here in America.
I ran across an article on The Business Insider, written by Taras Ilkiv, the editor-in-chief of a Ukrainian news site.  For the past seven years, he has written about the political and economic climate in Ukraine and lived and worked in Kiev, the heart of the protests.  So he knows what he's talking about.  Here are the issues that he says the Western world has gotten wrong, and what he would like us to understand... 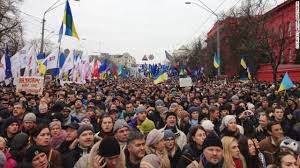 1.  Western media outlets are pointing a finger at the disagreement between the European Union and its neighbor, Ukraine, over the latter's deterioration of democracy and the rule of law as the reason that civil unrest has broken out in the Eastern European country.  But Ilkiv says the reason that a million people turned out in protest at the end of November has more to do with the total corruption of the government, the burden of over-taxation experienced by the middle class, and the lack of justice and honesty by officials in regard to national security.
2.  International observers credited the 2010 election of Viktor Yanukovych as fair and democratic.  Since then he has sentenced and jailed his opponent to 7 years in prison, blaming her for allegedly promoting unscrupulous gas contracts with Russia that caused a gas crisis in 2009, and saw Russia cutting the gas supply to its Ukrainian and European customers.  President Obama is ignoring the situation, while President Putin enjoys the benefits of the contracts.  But the people of Ukraine are the ones who have suffered.
3.  According to Mr. Ilkiv, there is an informal vertical power structure that surrounds President Yanukovych, and that results in an imbalance of power.  He has established a chain of command, where all power structures, tax agencies, prosecutors and courts are directly subordinated to his will.
But that's not all.  Some of the most profitable sectors of the Ukrainian economy are under its control.  And this power structure has managed to expand its power base into media outlets, which in turn are reluctant to criticize the authorities.  The Ukrainians have no independent media sources and rely on the internet to get their truth in the news.  But even that is under threat, because Yanukovych signed a law that allows anybody to close any websites without trial or warning because of the slightest complaint. Journalists face enormous pressure and huge campaigns to discredit them, and bodily harm has even come to a few.
4.  As you can imagine, if you disagree with this regime, recrimination is the name of the game.  The pressure of courts and prosecutors is brought to bear against anyone who dares to speak out; property is confiscated, and a newly signed Presidential act allows a person to be sentenced without his or her presence in the court.  Not since Stalin have such tactics been in force.
5.  The opposition against the current regime is fractured and ineffective.  Three different political factions are vying for the role of opponent in the 2015 elections, but they are either the "old party" of elected-but-discredited; the radicals who want to use violence to push out the regime; or a popular retired boxing champion.  None have a majority of support, and the ineffectual standoff has disappointed the radical faction and resulted in bloody confrontations and riots in the capital city of Kiev. 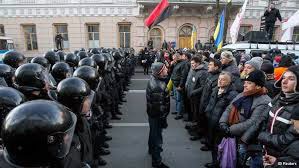 6.  Perhaps the most disturbing piece of information that has come from Taras Ilkiv is the existence of  the 'Berkut' special forces, troops that are part of the Ministry of Interior.   According to Mr. Ilkiv, "Though they have had no official status, they are formed of police officers specially trained to suppress the uprising. Their number is small — only four thousand — but they are particularly severe and receive a good salary for their work."  If there is any good news in this state of affairs, it is that Ukrainian forces are reporting that the Ukrainian army has refused to defend the regime of Yanukovych and fight against the people.
7.  The good people of the Ukraine have taken notice that the U.S. and the rest of the West are largely ignoring their plight.  They do not believe that the West is interested in helping them stand for democratic ideals.  And what should be most alarming is this statement by Mr. Ilkiv:  "Additionally, there were rumors in the local press that America agreed to give Ukraine to Putin in exchange for increasing U.S. influence in Syria and other hot spots."
8.  The Ukrainian people are determined -- and prepared -- to fight for their rights.  The protestors have descended upon the Square of Independence in Kiev and brought with them their tents, field kitchens, a stage; they have erected a makeshift hospital, provided private security and even set up an impromptu university.  The discipline of the protestors is to be admired.  Alcohol is not allowed and they have erected barriers against regime assault.  Their actions are telling the world that they are fighting for their future.

So, while our media may not be reporting the full extent or magnitude of what is going on in the Ukraine, I think we can get a pretty good picture from Taras Ilkiv's narrative.  Sounds pretty scary, doesn't it?  And eerily reminiscent of the Arab Spring.  America has always stood on the side of freedom, independence and democracy, yet once again we are silent against oppressive governments.  Will this be a repeat of the uprisings in Syria and Egypt, and are we seeing the ramifications of another tyrannical oligarchy?  What does this bode for the rest of the world?  The tactics used by the Ukrainian President sound all too familiar and hit a little too close to home for my comfort.  Are you paying attention?  I think we would be wise to keep our eyes on Ukraine, and pray for God's justice in the world.  Tomorrow, I would like to share with you the bravery of Ukrainian Church leaders in this matter.  Oh, that our own faith leaders would be so direct and outspoken!

Proverbs 25:26    "Like a muddied spring or a polluted fountain is a righteous man who gives way before the wicked."