Where Has The Music Gone?

I feel compelled to make a comment on the degenerateness (if that's a word) of the Music Industry's 2014 Grammy Awards show; only because I think we need to be aware of the music that is influencing our younger generation(s).  Call it a Culture Check, if you will, and a signpost of how far we've fallen.  When the world looks back on the fall and decline of the United States, let the history books show how the music segment of the entertainment industry led the way.
OK, I'm going to admit to being somewhat of a pollyanna when it comes to music.  I haven't listened to what would be called "popular" music for quite some time.  As I've gotten older, I didn't like where it was headed and "the message" didn't resonate with me.  So, I find myself listening to music from bygone days, when the lyrics and the melody transport me to a more innocent time in my life, when the world didn't seem quite so dark and menacing.
In fact, I've always been drawn to the beautiful voices, harmonies and soul represented by early rock n' roll groups.  When I was in college in the 70's, my circle of friends found ourselves nostalgically re-living the sounds of the late 1950's - early 60's singers like Sam Cooke, the Del-Vikings, Buddy Holly, Jackie Wilson, Elvis Presley, and the Everly Brothers.  There was just something about the simplicity and energy in that music that fascinated us.  So, it was because I had heard that the Grammy's would honor the passing of Phil Everly that I even found myself tuning in --- or should I say, "surfing" the show, since I only wanted to DVR it and observe the tribute later that night. 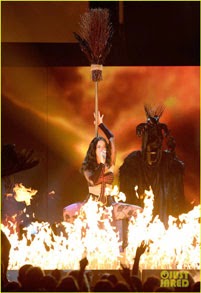 The few snippets that I could even make myself watch were so disturbing, that I am left with scars on my soul, even these several days later!  And it has nothing to do with the preponderance of rap music, which does nothing for me (and isn't intended to).  The opening number by Beyoncé and her controlling husband Jay-Z was nothing less than pornographic.  I couldn't even sit through the entire number, because it was just too offensive.  Combined with their ever-present occult and satanist finger signs, it was a fitting precursor to the rest of the show.  And did anyone else think that Miss Bey, as she is known in the hip-hop culture, appeared to be in a trance-like state of possession?   Sadly, there was no light in those celebrated eyes; only darkness.     As I fast forwarded through various acts, I would occasionally stop to see if the lyrics had any redeeming qualities, or if the melodies might be worthy of humming -- but more of the same shouting, pounding beat, with deep, dark messages of "magic" and "no going back".  Case in point, is the new darling of the Illuminati's female music protegées, Katy Perry.  By the way, Katy started out in the music industry as a Christian singer, but admittedly "sold her soul" for success in the pop music industry.  All you had to do was watch a portion of her performance on the Grammy's and you knew she had gone to the dark side.  She appeared with a witches broom, surrounded by minotaurs and devils; she simulated levitation, and proudly exhibited the Knight Templar's cross (noted Illuminati symbol), all while the flames of hell played on a screen around her.  The symbolism was so blatant and in-your-face, that I find it hard to believe that the mass audience would not discern how they were being manipulated.
It was also hard for me to decipher what she was singing, because I couldn't force myself to watch the entire performance, so I googled the lyrics, and here is just a sampling of the words to her hit song, "Dark Horse":

[I knew] You were gonna come to me
And here you are
But you better choose carefully
‘Cause I, I’m capable of anything
Of anything and everything.
Make me your Aphrodite
Make me your one and only
Don’t make me your enemy, your enemy, your enemy.
So you wanna play with magic
You should know what you're falling for
Baby do you dare to do this?
Cause I’m coming at you like a dark horse
Are you ready for a perfect storm
Cause once you’re mine, once you’re mine
There’s no going back.

Then there comes the inevitable rap verse by no less than a character called Juicy J, in which he calls her "a beast" and his "Karma", and claiming that "she will eat your heart out like Jeffrey Dahmer" because her love is so addictive.
Now, you might think that my Christian faith has me seeing demons behind every musical note, but when you combine the visual stimuli of Katy Perry's witchcraft ritual with these lyrics that are suggestive of Satan's temptations and seductive calling to come to the dark side, then you better be aware of what your young (and not-so-young) girls are listening to.  The music industry seems as though it is on the verge of not-so-subtle mind control, and it is largely aimed at young girls!
Kind of makes the Everly Brothers Dream, Dream, Dream seem from another world, doesn't it?  And as if I wasn't thoroughly freaked out by the fragments of the show that I could stomach to watch, I had very disturbing dreams that night.  I will not give you the details, but suffice it to say that I woke up feeling as if something was trying to seductively draw me to a dark and unholy place.  That was after just watching bits and pieces of the show, totaling about 20 minutes!  What happens to your daughters if they receive a constant barrage of music by the accepted female trend-setters of our day?  Have you listened to the lyrics of Lady Gaga, Rihanna, Beyoncé or Katy Perry?
And if you want to ascribe my ranting today to being old-fashioned and un-hip, then I have no problem wearing that label.  But please do your own research!  The music industry is a sign of where we are on the End Times clock, and all you have to do is google any of these ... um, ladies ... and satanism or the occult, and see what you find.  All I know is that the sweet and innocent voice of Phil Everly sounded like an angel among so many demented devils.  Just like this decaying world, I feel that the music is truly dying ....

Romans 12:1    "I appeal to you therefore, brothers, by the mercies of God, to present your bodies as a living sacrifice, holy and acceptable to God, which is your spiritual worship."