The Salute Seen Around The World

While yesterday's post pointed out the scurrilous attempts by Army powers to create bias against certain Christian organizations, today's post will focus on the inspirational element of the Army .... the character of the troops themselves.
As you know, my heart swells with pride every time I get the opportunity to visit with Army veterans at Fort Sam Houston.  Their commitment to their "job", and their faithfulness to their duty is above reproach.  So now I bring you another story that you may already be aware of, but it certainly bears repeating if one more person can hear it for the first time.
The scene is as follows:  Josh Hargis, a U.S. Army Ranger, is on a mission in Afghanistan to capture a high value target.  A woman wearing a suicide vest sets off a string of 13 IEDs, killing several members of Josh's unit, and leaving Josh with extensive wounds.  After hanging on for over two hours until he could be rescued, Josh is air-flighted to Germany where he lies in a hospital bed after enduring hours of surgery.  The multitude of bandages and tubes give evidence to the seriousness of his wounds.
As is customary, a Purple Heart ceremony was held at the hospital, where Josh's commanding officer pinned his military decoration to the blanket that covered him.  The ceremony took place with an unconscious Josh in his hospital bed, surrounded by other Rangers, nurses and hospital staff.  At least, they thought he was unconscious.  And in a letter to Ranger Hargis's wife, Taylor, his commanding officer related exactly what happened: 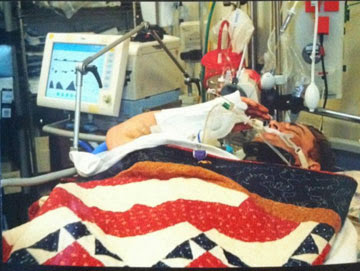 “During the presentation the [Ranger Regimental] Commander publishes the official orders verbally, and leaned over Josh to thank him for his sacrifice. Josh, whom everybody in the room (over 50 people) assumed to be unconscious, began to move his right arm under the blanket in a diligent effort to salute the commander as is customary during these ceremonies,” the letter read. ”Despite his wounds, wrappings, tubes and pain, Josh fought the doctor who was trying to restrain his right arm and rendered the most beautiful salute any person in that room had ever seen.”
In this emotional moment, “grown men began to weep and we were speechless at a gesture that speak volumes about Josh’s courage and character,” the letter continued. “The picture, which we believe belongs on every news channel and every news paper is attached. I have it hanging above my desk now and will remember it as the single greatest event I have witnessed in my 10 years in the Army.”
What you don't know about this young man is even more impressive.  A broken femur during a high school skiing trip, nearly kept him out of the Army.  After being declined for service three or four times, Josh still wouldn't give up.  He petitioned the Surgeon General by letter, and was finally accepted.  At Fort Benning, he realized his dream of becoming an Army Ranger. 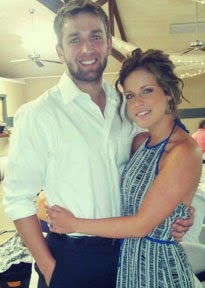 So I am doing my small part in making sure that Josh's courage, determination and respect for his country are shown around the world.  This small blog may not be seen by huge numbers, but it is blessed with readers from Russia, India, China, Pakistan, Canada, Republic of Georgia, and many more.  I want people across this globe to understand that America is not defined by our foreign or domestic policies; we are much more than the face of our politicians.  We are a nation of individuals like Josh, who take pride in what this country stands for.  Josh, and his wife, are examples of the lengths to which we will go to preserve our God-given rights to live in freedom.  (Josh's sister, Angela, is also in the Army, serving right here at Fort Sam Houston).  I don't know if Josh Hargis is a Believer or not, but I'm pretty sure that God is not finished with this young man.  His bravery and spirit are truly an inspiration to us all.