Todd Starnes of Fox News online has consistently reported on the state of American faith in our culture.  This time, he reveals that the Army has listed one of the most outspoken, yet well-respected,  Christian ministries as a hate group.  During a briefing at Camp Shelby in Mississippi, U.S. Army active duty and reserve troops were informed that the American Family Association would be listed alongside such domestic hate groups as the Ku Klux Klan, Neo-Nazis, Black Panthers, and the Nation of Islam. 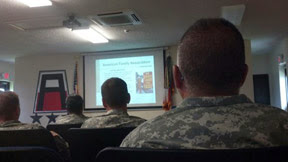 Whether it was deliberate or not, the instructor tried to link the AFA with controversial Westboro Baptist Church preacher Fred Phelps, citing that both groups hate gays.  Nothing could be further from the truth in the case of the AFA.  The American Family Association has been on the front lines of the American culture war since 1977, and has long been considered one of the largest and most effective pro-family organizations in the country.  "Pro-family" means they support traditional family values, and the concept of Biblical marriage.  "Pro-family" means they believe in the preservation of traditional marriage; i.e. one man-one woman.
Let me share their action statement:  The American Family Association acts to:
(1) restrain evil by exposing the works of darkness;
(2) promote virtue by upholding in culture that which is right, true and good according to Scripture;
(3) convince individuals of sin and challenge them to seek Christ’s grace and forgiveness;
(4) motivate people to take a stand on cultural and moral issues at the local, state and national levels; and
(5) encourage Christians to bear witness to the love of Jesus Christ as they live their lives before the world.
Does this sound like HATE?  I will admit that they believe in standing up and being vocal about defending Godly principles.  But they have never promoted hostile or violent action towards those they disagree with.  And that is what the difference of opinion is .... a disagreement!   Therefore this stance by the U.S. Army has many concerned that Christians and their beliefs are under blatant attack in the military.
This particular instructor warned that association with such groups as AFA and the Family Research Council could result in punishment.  That left one soldier worried that by listening to American Family Radio all day, could he be faced with a Uniformed Code of Military Justice charge?  While the official brass assured Mr. Starnes that this was an isolated incident, you might recall the Army briefings a few months back that classified evangelical Christians and Catholics as examples of religious extremism. Apparently Christians and evangelical organizations aren't "consistent with Army Values".  So what does that mean?
Perhaps you will recall the words of our Commander-in-Chief after Muslim extremists attacked our diplomatic outpost in Libya last year:  "Since our founding, the United States has been a nation that respects all faiths.  We reject all efforts to denigrate the religious beliefs of others."  Let's see .... I guess the AFA doesn't deserve the same deference and respect as those who want to harm us, right?
But I guess that it should come as no surprise that Christian organizations are being falsely accused when you consider that military installations, as well as law enforcement agencies, are using a list compiled by the Southern Poverty Law Center.  The SPLC has long been suspected of being left-leaning and has been criticized by conservatives for "smearing religious and far-right groups and ignoring far-left hate groups."  They certainly wear their ideological biases on their sleeve.
So once again, Todd Starnes has exposed this seemingly anti-Christian intolerance within our military.  But why?  What is the end game?  Could it be, as Mr. Starnes presupposes, that there is an effort to separate the military from the American people?  By pointedly planting seeds of doubt about Christians and some of our nation’s most prominent Christian ministries, it is my hope that the military's smear campaign will only serve to embolden Christians within the ranks.  The time is coming when a person's membership in the kingdom of God will triumph over all other associations.  Hallelujah!

Matthew 5:11    "Blessed are you when others revile you and persecute you and utter all kinds of evil against you falsely on my account."