I remember when the reality of our nation's decline was sinking in during the bailouts of 2008.  People began waking up to the possibility that America was in serious trouble and we might be headed toward an irreversible crash.
"Prepping" came into vogue, and at the same time, Americans began rediscovering just what our Constitution meant to us.  Those of us who were out ahead of the curve took steps to gain more knowledge about things our ancestors took for granted, and we actually began visualizing a quite different future for America than our friends and neighbors who were still focused on the latest version of the iPhone.
We began listening to economists who were outside the Wall Street institutions, and who predicted various signposts that might possibly forecast an imminent collapse.  It might have simply been a convenient symbol of our culture, but Wal-Mart was always used as the indicator.  And wouldn't you know it ... Wal-Mart just played a significant role in the economic news of our nation.
It wasn't quite the TEOTWAWKI scenario that has been commonly accepted as the tip-off to collapse; this weekend's incidents fell just short of rioting at the local Wal-Mart as angry, starving hordes salvaged for food.  Notice, I said just short .... 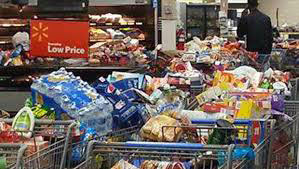 Over the weekend, the Electronic Benefits Transfer system (that's a nice way of saying food stamps) crashed.  The "official" statement from Xerox, the company that runs the system for 17 states, was, you guessed it .... technical difficulties.  Xerox rushed to assure folks that it had nothing to do with the government shutdown.  (I personally would not be surprised if there weren't some secret emails emanating from DC that encouraged "a little pain" among the recipients.  Why not?  Politicians have caused pain at the War Memorials and the State Parks.  EBT recipients are a logical choice for the next "nudge".)
With the unexpected crash, we witnessed another example of the moral decline and utter dependency of our citizens.  In Georgia, frantic consumers left full shopping carts in the aisles when they discovered their EBT cards weren't working.  As a result of their full reliance on the government, these people were rendered helpless, weak and vulnerable when they couldn't get their free food.  Yet they all owned phones on which they could tweet and facebook their consternation at being denied what they feel entitled to .... I got kids to feed!  Just because the government is shut down, my kids are supposed to go hungry?
Are you as amazed as I am that these people have no other means by which to feed their families?  Luckily for them, the computer glitch was corrected within a few hours and their taxpayer subsidized shopping could continue.  But what would have happened if that couple of hours had turned into a couple of days, or a couple of months?  Would they still be standing around bemoaning the failure of the government?  Personal responsibility is a fading character trait among this segment of society!
Then there was the different EBT experience in Louisiana.  In this case, the greed of the underprivileged was prominently on display.  For some reason, Wal-Mart cashiers discovered that there were no limits on the EBT cards of consumers.  After calling corporate headquarters, cashiers were told to honor the purchases anyway.  So you can imagine the chaos and avarice as shoppers loaded up their carts with food they were not entitled to.  Did even one single person consider who would be paying for the hundreds of dollars of food they were indulging for themselves?  Did they think it just came from some "secret stash" in DC?
And to make matters worse, once the cards came back online a couple of hours later, and the consumers knew their purchases wouldn't be honored, they just left stacked and loaded carts sitting in the aisles.  You can't convince me those people didn't know that this was fundamentally wrong!  They are aware of how much, down to the penny, are on those cards and when they are due to receive their monthly allocation.  One woman had $700 worth of food, and when she arrived at the checkout stand, she was angry to discover that the glitch had been corrected and her purchases would not be allowed .... even though she only had 49 cents on her card!
Although these scenes might not be the precise sign that tips the scales toward complete economic collapse, they are close enough to signal the immoral and debased state of our society.  Temporary computer malfunctions resulting in both deprivation and gluttony, and then evolving into similar events involving unruly crowds and social disorder should make us sit up and take notice.  It won't take much more to fulfill "the Wal-Mart prophecy", and I'm afraid we don't have much longer until we witness the manufactured and desired chaos that marks our final slide.  This was just a test.

Philippians 3:19    "Their end is destruction, their god is their belly, and they glory in their shame, with minds set on earthly things."
Posted by Pam Kohler at 7:00 AM

Email ThisBlogThis!Share to TwitterShare to FacebookShare to Pinterest
Labels: Economic News, Our Culture.