I thought we'd take a break from our "character study" of America, and just feast on this story.  It's enough to make my soul sing! 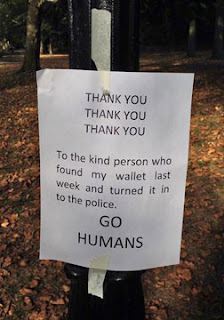 The Good News network recently posted this article, and I thought it was worth reprinting.  Apparently, this picture was photographed in New York City where someone was thrilled to have their wallet returned and desperately wanted to thank the human who was responsible.
And, of course, once the photo went viral, everyone wanted to share their story of similar kindnesses.  As it turns out, it seems as if this compassionate gesture is more common than one might think.  And I loved how the article voiced this phenomenon .... "it's like little drops of holy water that when collected in one place create an ocean of goodliness."  What a wonderful image!
So I thought you'd like to hear some of these stories, and let them wash over you like those little drops of holy water....
•  "I have lost my wallet twice in my life: once on an airplane and once in a NYC can. Both times it was mailed back to me anonymously with money and everything still inside...go humans indeed!"
•  "At Paul Simon's 1991 Concert in Central Park I lost my wallet. It was returned to me in the mail! I tell EVERYONE this story! Go Humans!"
•  "Same thing happened to me this week. Left my wallet on the roof of my car. It fell on the road. A nice lady saw it, stopped her car to pick it up, and located me to return it. Go Humans!"
•  "Left my wallet in a Car2Go this summer and the next renter returned it. Go humans!"
•  "There are good people in this world. When getting gas a couple days ago, I accidentally dropped my credit card and didn't realize it until later. I went back to the service station and someone had found it and turned it in. I was so grateful as I am a senior with limited income."
•  "In graduate school I twice (!) lost my purse. Both times it was turned in by a fellow student. "
•  " Many years ago someone broke in a friends car and stole my Gucci purse that was hidden under the seat with cash and credit cards, someone later found and returned the purse using my address from my DL, surprisingly everything was still there. "
•  "I've had a man chase me out of a grocery store with my purse that I'd left in the seat. Huffing and puffing as he reached my door to tell me, ma'am you left this in your cart."
•  "lost my drivers license in Newark, NJ airport and it was returned to me after a week on vacation in NYC! Love you guys on the east coast!"
•  "I lost a Palm Pilot in a cab, back when they made electronics that could store contacts but not make phone calls. The cabbie found it, figured out my name, found my family members in the contacts, called my sister, gave her his info, and then when I called him he met me to drop it off."

I guess the bottom line is that all is not lost in the human race.  Maybe our innate state is still selfishness and sin, but I believe we all are instinctively drawn to our Creator, and He has instilled in each of us the capability to respond to situations in righteousness.  Isn't it nice to still have hope?