The focus of the world is on Syria.  One particular organization is bringing the plight of Syrian Christians to light.  Open Doors empowers persecuted Christians by supplying Bibles and Christian literature, training Christian leaders, facilitating social/economic projects and uniting believers in the West in prayer for Christians, who are the most persecuted religious group in the world and are oppressed in at least 60 countries.  (I fear that we in America think we are immune to this persecution.  But when it visits our shores, I'm afraid it will be swift and devastating).  Specific to Syria, Open Doors is reporting that Christian women are especially vulnerable to sexual abuse, while Christian men are facing pressure from both sides to join the battle. 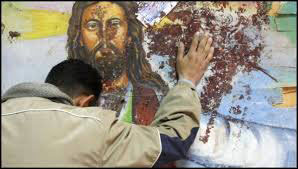 More than two years have passed since the beginning of the civil war between President Bashar al-Assad's government forces and the Free Syrian Army.  According to Nicholas Heras,  a Syrian political commentator, the fight is increasingly taking the shape of a "jihad" against the Syrian government, as opposition forces are ever more "Islamized."  Meanwhile Syria’s Christians are called victims of "systematic militarization."
An Open Doors contact in Syria reports the alarming conditions in the city of Aleppo, "The situation isn't improving. People talk a lot about the war and expect more war is coming." He says that Christians "are not in a good mood. We pray for a solution, but it seems it is going to be very bad. People are afraid. Especially now that the head of the Church isn’t here; there is still no news about our kidnapped bishop. People want to leave, but there is no way out. People are afraid of being kidnapped when they think of leaving the city by car or bus."
It is in this light that I wanted to bring you a prayer by a Syrian Pastor, who is a partner with Open Doors in Syrian relief work.  It is a moving and heart-breaking prayer. It gives insight into the suffering of the people who have decided to stay in war-torn Syria.


I weep for my country! I am so sad and speechless…
They advise me to leave my country … to emigrate. I respond saying:
I’m staying … for the church of Jesus … that the message of Jesus may remain a light guiding those who are lost and afraid.
I’m staying … because the harvest is plentiful … and the suffering is huge … a deep wound, a sense of despair.
I’m staying … to follow in the footsteps of my Master who went around doing good and healing all who were under the power of the devil.
I’m staying … because I’m busy in the ministry of saving souls (or, can someone like me run?. … Lord give me strength).

And here is what this righteous Pastor asks us to pray for:

If you are a Holy Spirit-filled Christian, then you will recognize the commitment this godly man has to fulfilling his life's purpose, which has been laid out before him.  Could we .... or maybe the better question is .... Will we .... respond the same way when persecution is upon us?  Will we be focused on following in "our Master's footsteps"?  Will we be a guiding light to those who are lost and those who are afraid?  Because I can tell you that I think the harvest in America has the potential to be greater than anywhere else on earth.  There are so many people in this nation who are in need of the saving grace of our Good Shepherd.  So let's commit to not only praying for this Syrian pastor, a fellow believer in Yeshua, but to pray that we, too, may be busy in our own ministries of saving souls.  Time is running out!

1 Peter 4:17    "For it is time for judgment to begin at the household of God; and if it begins with us, what will be the outcome for those who do not obey the gospel of God?"