Alert: The Middle Class Is Hurting!

OK, I know I promised that I would take a real vacation, but I just can't help sharing with you some things that I am seeing as we travel across this great land of ours.  First of all, you must know that I am an avid people observer ... not just people watcher, but I love to take note of their opinions, their actions, and above all else, their thoughts about the future.
PLW and I have some very good friends who are always a "must-see" whenever we travel.  They were young-marrieds that we met when we all worked for one of the big three insurance companies in America.  We have watched them grow into middle-aged parents with four beautiful girls; and we have watched them work hard to achieve "the American dream".
Well, in a private moment, Mrs. B shared with me how financially strapped they are.  Their oldest daughter is preparing to attend a major university next year, with her sister following a couple years behind her.  The two youngest will be several years behind that.  Of course, that kind of obligation would be enough to keep anyone up at night. 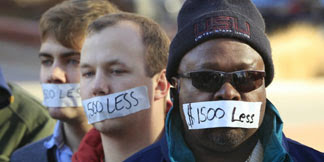 But that wasn't even her point.  Her husband has risen to a respectable middle-management position in his company; he has paid his dues and climbed the ladder.  My friend said that Mr. B had put pen to paper a few weeks before and was shocked when he came to this realization:  in the last 5 years, while his salary has grown, his bonuses have declined.  This has resulted in the fact that his yearly salary in 2013 will be $1000 less than it was in 2008.  That's a big deal when prices are going up across the board in everything!
I noticed that they are cutting back on all the niceties that they used to enjoy .... eating out is curtailed; they now use skim milk in their morning coffee instead of the fancy coffee additives;  they no longer trade their car in when it gets over 70,000 miles; and budget cutting is taking place at the grocery store, TV cable channels, higher insurance deductibles, and anywhere else they can save a dime.
Seeing and hearing that this average, normal, middle-class American family is beginning to be alarmed over their future made me clearly see a dynamic that I fear is sweeping the land.  The Upper Class is still feeling no pain.  They can absorb the higher prices easily, and are still able to enjoy their second homes and their luxury items.  A slight hiccup in their yearly income just means they take three extravagant vacations a year, instead of four.
The Lower Class is still groovin' along.  The entitlements are still there and, in fact, they are promised even more in the future ... free healthcare!  They have nothing to worry about.  The Nanny State is going to take care of all their needs.  No job?  They don't need one!  And let's be honest --- they don't want one!  All this good livin' would disappear and they'd have to take care of themselves.  Who would want to do that?
No, it's the Middle Class that is hurting and will ultimately pay the price for all our folly.  But then we know that's the ultimate goal, right?  Hasn't that been the objective of every major regime that sought extreme power over the people?  Get rid of the Middle Class.  The Elites gain control, destroy the Middle Class and push everyone to the bottom.  When the masses are all pushed into the Lower Class, look how easy it is to manage them!  Didn't they do that in the Russian Revolution?  And what about China?  Guess there's no mistaking the purpose behind "Top Down, Bottom Up" is there?  Pretty good strategy, if you can pull it off.
And from what I am seeing as I travel across this land, the strategy is beginning to work.  It may not be "in your face" obvious yet, but I would be willing to bet that there are more and more Middle Class households across America experiencing the same realizations that our friends, Mr. and Mrs. B, are facing .... our future is looking dimmer.   As this becomes the recurring testimony across the American Middle Class, we will know that America's shining beacon is being systematically dismantled.  We don't have much time to save her!

John 16:33   "I have said these things to you, that in me you may have peace. In the world you will have tribulation. But take heart; I have overcome the world."