What Do Math and Social Justice Have In Common?

I stumbled across an article by Ben Velderman, a writer for an organization called Educational Action Group, and his commentary stunned me at the audacity of the Progressive machine.  To be clear, the EAG Foundation is a watchdog, of sorts, and believes the one-size-fits-all, assembly line government school system requires serious reform.  At the forefront of their perspective are the following:
•  Teachers’ unions have been successful at defending the government monopoly of education in America, to the detriment of student and taxpayers.
•  What is being taught matters.  EAG has documented activists bringing their personal political agenda into the classroom to indoctrinate students into a leftist mindset.
•  America was founded on beliefs of free markets, hard work and innovation, not a collectivist mindset promoted by union activists.
•  EAG hopes to shine a spotlight on the leftist agenda and activists, and their mission to “fundamentally transform” the United States of America through the government education system.
This post will give you examples of the socialist propaganda that is spreading throughout our schools.  I will admit that I have a bias against this position, and will leave it to you to make up your own mind.  I merely want to portray how different the classroom is than when we were attending kindergarten through high school.
Ever hear of an organization called Rethinking Schools?  Me neither.  But here is their self-ascribed philosophy:  At a time when racial and class inequalities are growing in our country, we believe that any vision of schooling must be grounded in "the common school."  Further research noted that this organization did not endorse the Common Core curriculum, which at first glance, was in their favor.  After reading on, I discovered the reason ... it wasn't that Common Core promoted a curriculum determined by the federal government; it was because it was too hard for urban schools.  And there lies the heart of the Progressive agenda. 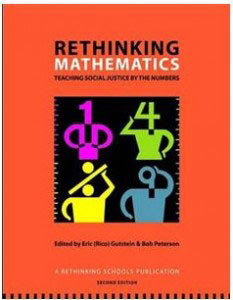 Educational Action Group is reporting that Rethinking Schools has been sneaking left-wing “social justice” lessons into America’s K-12 classrooms for nearly three decades.  Here's a perfect example:  The group’s latest effort to indoctrinate the nation’s youth is a 286-page book aimed at teachers, titled “Rethinking Mathematics: Teaching Social Justice by the Numbers.” The book is a mix of math lesson plans and essays from activist educators who explain how they’ve used their classrooms to advance a progressive political philosophy.
So how did they do it?  First of all, the book pushes the argument that the U.S. is a hopelessly racist country that routinely oppresses “people of color.”  And how are they able to accomplish this agenda? The message is conveyed through lessons and essays about racial profiling, environmental racism, unfair mortgage lending practices of Big Banks, the “overabundance of liquor stores” in minority communities, and slave-owning U.S. presidents.  They follow that up with the viewpoint that capitalism’s unequal distribution of wealth is the root cause of the world’s suffering. Students learn to despise free market economics in lessons about third-world sweatshops, “living wage” laws, the earnings of fast food workers and restaurant CEOs, and the “hidden” costs of meat production.
Pretty masterful, right?  It's easy to appeal to the emotions of young students who have no experience in real-world economics, by demonstrating the math concepts of ratios, averages, percentages, bar graphs, density and geometric formulas, all the while training kids to see the world in the Progressive preferred categories of “haves” and “have nots.”
If you want to see how it works, here's a specific example.  In a chapter titled, “Write the Truth: Presidents and Slaves,” “Rethinking” editor and Milwaukee teachers union President Bob Peterson explains how he used radical South American educator Paulo Freire’s theory that "students must understand how the world’s systems work to oppress the masses before they can reform those systems."  Apparently it was easy for Mr. Peterson to apply this principle when teaching his 5th grade students: “Specific objectives for this mini-unit (about slave-owning U.S. presidents), such as reviewing the use of percentages, emerged as the lessons unfolded. But its main purpose was to help students critically examine the actions of early leaders of the United States and become skeptical of textbooks and government websites as sources that present the entire picture.
“I figure that if kids start questioning the ‘official story’ early on, they will be more open to alternative viewpoints later on. While discovering which presidents were slave owners is not an in-depth analysis, it pokes an important hole in the godlike mystique that surrounds the ‘founding fathers.’” 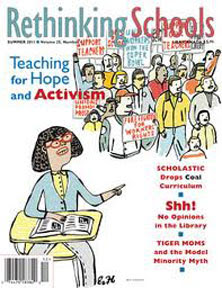 Here's another example:  In a subsequent chapter of Rethinking Mathematics, geometry teacher Andrew Brantlinger chronicles how he turned an ordinary lesson about calculating the area of a circle into an analysis of the South Central Los Angeles community that rioted after the 1992 “Rodney King” verdict.
During Brantlinger’s lesson, students learned that in 1992, South Central L.A. had no movie theaters or community centers, but it had 640 liquor stores. That led one student to conclude, “All they want them to do is drink.” (Brantlinger says he didn’t ask the student who “they” were.)
According to Brantlinger, most students decided, “We should have more jobs and more community centers, then you wouldn’t have to worry about riots,” and “The government should put more money in (South Central).”
Here's the way I see it:  For these Progressive educators, it's not so much about teaching math to our kids, or elevating their quality of education.  As the article's author, Mr. Velderman points out, their strategy seems clear:  "Teach students that America was founded by – and for – racists, and they will support radicals’ efforts to transform the American system.
In other words, if students are taught that the constitutional principles of private property ownership and free market capitalism are merely tools white people use to oppress “people of color,” they’ll eventually demand a socialist form of government."  And if they can use a few multiplication tables, or geometry problems along the way to substantiate their bias, then they're doing their job of "educating" the kids.
The article finishes by quoting the editors of Rethinking Mathematics.  “A social justice approach to math is the appropriate type of math for these unjust times,” they write. “Other, traditional forms of math are often too abstract, promote student failure and self-doubt, and, frankly, are immoral in a world as unjust as ours. Traditional math is bad for students and bad for society.”
I beg to differ.  All you have to do is look at the success ratio of family incomes in the years "traditional math" was endorsed.  That would be before the entitlement policies of welfare became institutionalized; when families of all races were intact and many owned their own businesses.  Today, an "appropriate type of math" would be one that teaches every student, regardless of ethnicity, how to succeed in math and in a society where he is able to reap the rewards of his own labors, rather than relying on a handout from the government.  It seems pretty clear to me; you can no longer blame the white Founding Fathers for self-imposed slavery.  Re-distribution of wealth will not guarantee that these students will keep the so-called advantage they are seeking.  They will only achieve their dreams with limited government, a free enterprise system, and a lot of sweat and elbow grease.  There is your math lesson, my friends; and it adds up to real success!

For more indepth analysis of this educational agenda, read the entire article by Ben Velderman.

Colossians 2:8    "See to it that no one takes you captive by philosophy and empty deceit, according to human tradition, according to the elemental spirits of the world, and not according to Christ."
Posted by Pam Kohler at 7:00 AM