Are You Buying This? 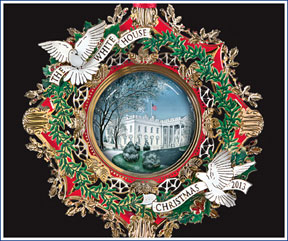 As if it couldn't be any more transparent, the White House has revealed that it will honor Woodrow Wilson with its official 2013 White House Christmas ornament.  This is not surprising, since President Wilson was a strong advocate of Progressivism, believing not only that we should challenge the very construction of the Constitution, but that the Declaration of Independence was no longer relevant.
See if these observations from a 2007 article by G. Stolyarov II don't sound familiar:
•  Wilson believed in changing legal and political structures, but not merely for the sake of variety; he only supported changes that he considered "improvements"; he viewed the future, not the past, as the more glorious time toward which the present ought to aspire.  Wilson applauds the "modern idea" of leaving the past and pressing on to something new.
•  Wilson wanted to replace the system of checks and balances with a system of cooperation among the branches of government.
•  For Wilson, the Declaration of Independence had no meaning unless it could be reinterpreted in a way that evolved with the concrete circumstances of the times. This reinterpretation led Wilson to redefine even the word "tyranny" to mean "control of the law, of legislation and adjudication, by organizations which do not represent the people, by means which are private and selfish." Instead of opposing the tyranny of intrusive government, Wilson wished to redirect the Declaration against the "tyranny" of corporations.
•  Wilson claimed that there is no essential difference in principle between socialism and democracy. Both rest ultimately on the absolute right of the community to determine its own destiny and that of its members; both assert that "men as communities are supreme over men as individuals."
•  Additionally, Wilson claimed that changes in economic and social conditions justified changes in the role of government.  Wilson saw a danger in the growth of corporations, whose power he alleged to have grown enough to compete with government. He saw a role for government in restricting the power of these corporations.
Need I go on?  For a full version of Mr. Stolyarov's article, click here.  But I think that I have shown you enough to explain the following White House press release:   The 2013 White House Christmas ornament honors Woodrow Wilson, the twenty-eighth president of the United States. The years of Wilson's two terms in office, from 1913 to 1921, are defined by the unprecedented devastation of World War I, yet Wilson himself would be awarded the Nobel Peace Prize in 1919, and his life is distinguished by his resolve that the Great War would truly be the war to end all wars. It was President Wilson's extraordinary quest for a lasting world peace that inspired the design of our ornament....  The words inscribed on the reverse side of the ornament were delivered by President Wilson in his War Message to Congress of April 2, 1917: "Peace must be planted upon the tested foundations of political liberty."
But here's the deal.  President Wilson changed the dynamic of this country's political identity away from freedom and independence.  He was largely responsible for the establishment of the United Nations, whose goal it is to usurp the sovereign rule of nations and to govern according to the "community of nations" model.  I have a pretty good sense that Wilson's (as well as his current predecessor's) idea of political liberty and mine do not coincide.
Is the selection of this text and this ornament a message to our time?  Because, from where I stand, the very foundations of our political liberty are being dismantled, and our involvement (or lack thereof) in the social/democratic/peace processes throughout the Arab Spring (as well as Summer, Fall & Winter) have brought anything but peace!  From where I stand, the message and the symbol ring hollow for this season of Good Tidings.

Isaiah 52:7     "How beautiful upon the mountains are the feet of him who brings good news, Who proclaims peace, Who brings glad tidings of good things, Who proclaims salvation, Who says to Zion, "Your God reigns!"