Putin and the Church in Russia

At first glance the two terms seem incompatible and at odds with each other.  But according to a report on Fox News, they have formed at least a cautious alliance.
Unlike America, which goes to great lengths to keep religion and politics separate, President Vladimir Putin has given his blessing to Spas TV.  "Spas", which means "Savior" is a satellite television channel affiliated with the increasingly powerful Russian Orthodox Church.  The station recently filed with the government ministry to take their transmission to the national level.
Launched in 2005, Spas TV claims to have an audience of about 10 million households in Russia. Funded with donations from Orthodox businessmen, it features talk shows and educational programs that have criticized evolution and railed against such Western ideas as liberal democracy, feminism and gay marriage. 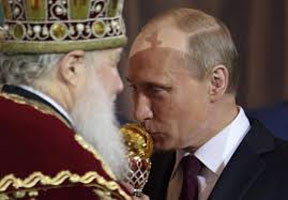 So why would a former KGB agent in the godless Soviet Union now embrace a political partnership with the Church?  When you look at the numbers, it makes perfect sense.  According to the Pew Forum on Religion and Public Life, 101.1 million people identified as Orthodox Christians in Russia, making up 71 percent of the population.  Compare that to the American Religious Identification Survey, in which 73-76% of Americans claimed to be Christian.  But that seems to be where the comparison stops.
Since the collapse of the Soviet Union in 1991, the Russian Orthodox Church has been completely revamped after being virtually nonexistent under decades of communist rule.  It has gone from an underground vestige of the era of czars to a galvanizing political force.   “The rebuilding of the Russian Orthodox Church has been massive,” Paul Valliere, a Butler University professor of religion told FoxNews.com. “It is like a completely different country than it used to be because the church, it is back. The church has a role of visibility in almost every sector of life.”  We, in the United States, seem to be doing everything we can to diminish the effectiveness of the Church.
The history of the Russian Orthodox Church is fascinating.  Traditionally, it is said to have been founded by the Apostle Andrew, who is thought to have visited Scythia and Greek colonies along the northern coast of the Black Sea. According to one of the legends, St. Andrew reached the future location of Kiev and foretold the foundation of a great Christian city.
The Church survived two centuries of Mongol rule in the 13th-15th centuries, and an internal fracture in the 17th century.  For the next two hundred years, it expanded and grew until it found itself in the middle of the Russian Revolution and a Communist takeover, which led to a marked decline in the power and influence of the Church.  Those were the dark days.
Now it seems as if the Church has returned to its historic place in relation to the State.  Although the State takes precedence, the Church has prominent second billing and acts as a balance to the State, while remaining subordinate.  While one might be suspicious of Putin's faith life, the Church's doctrine of repentance plays heavily into their willingness to accept his belief as genuine.  It is also pointed out that he has long had a soft spot for the Church; even wearing a cross while he was a KGB officer (given to him by his mother), and he has been seen often in church since the end of the USSR.
I think we can all agree that the thought of repentance is hopeful thinking, and wearing a cross and church attendance do not guarantee a saved soul.  But nevertheless, I find it interesting that while our country seems to be drifting away from its Christian roots, that Russia is once again embracing its heritage of Christian faith.  It goes without saying, that the Devil is in these details!  And anyone who has read Ezekiel, Chapters 38 and 39, knows the historic role that Russian plays in eschatology.  It will be interesting to see how Putin plays out his new role of "religious leader".  God's plan is never boring!

Matthew 7:15     "Watch out for false prophets. They come to you in sheep's clothing, but inwardly they are ferocious wolves."