This is the season of high school graduations, and most of them are forgettable .... long lines of graduates crossing the stage and boring speeches by school administrators and class officers that will soon be forgotten.  But two of those speeches are likely to have long-lasting ramifications.
Speech #1:   Roy Costner IV, valedictorian of Liberty High School (how appropriate!) in South Carolina, stunned the audience when he began his speech, as follows: 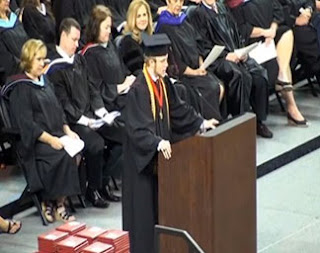 "I want to thank those that we look up to, they have helped carve and mold us into the young adults that we are today. I’m so glad that both of my parents led me to the Lord at a young age,” he said. “And I think most of you will understand when I say –  Our Father, who art in Heaven, hallowed be Thy Name.  Thy kingdom come ....."  Well, I think you know how the speech continues.

Speech #2:  Remington Reimer, valedictorian of Joshua, Texas (again befitting this story!) also gave a speech that caused quite a reaction.  Here is a portion of his speech:

"We are all fortunate to live in a country where we can express our beliefs, where our mics won’t be turned off, as I have been threatened to be if I veer away from the school-censored speech I have just finished. Just as Jesus spoke out against the authority of the Pharisees and Sadducees, who tried to silence him, I will not have my freedom of speech taken away from me. And I urge you all to do the same. Do not let anyone take away your religious or Constitutional rights from you."

Two very brave young men, who experienced very different results when they took a stand for their beliefs.  In the case of Roy, he enjoyed thunderous applause as he began the Lord's Prayer, and if you watch the video of his speech, you can even see smiles and consenting nods from the school officials sitting behind him.  In fact, the school has no plans to punish the former student for his actions.  That won't stop atheist action groups from filing suit, of course, but Mr. Costner wasn't afraid to challenge them. 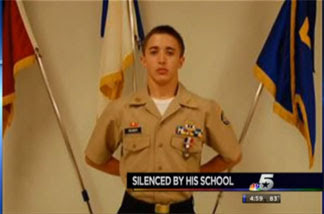 Neither was Remington, but, alas, he didn't receive such a positive response.  As soon as he uttered the above words, his microphone was cut off and his speech ended.  In this instance, it wasn't the invocation of his faith that was objected to; in fact, that part of his speech had been pre-approved.  It was when he veered from his prepared remarks and cited the Constitution and his right to free speech.
While you may think cutting off his mic was over the top, there is more to this story.  His father, Todd, is a doctorate-level physics and math teacher at the same high school his son attends.  And Remington will be a freshman at the Naval Academy come fall.  Apparently, the principal of the high school, the day after the silenced speech, allegedly threatened to write a personal letter to the Naval Academy and strip Remington of all honors related to character.
Of course, the principal denies the charge, and the Reimer family is not happy that the situation has escalated to this level.  They feel that if a disclaimer that was left out of the graduation program had been included, it might have alleviated the discord: “the content of each student speaker’s message is the private expression of the individual student and does not reflect the endorsement, sponsorship, position or expression of the District.”  But would it have?
Both of these incidents are a reflection of the rigid policies and regulations that threaten our society.  While Americans are becoming more aware of the threat against our faith and are willing to stand up against authoritarian policies, it is also becoming quite apparent that our Constitutional rights are being dismissed and reduced.  By refusing to remain silent, we invite both censorship and suppression.
You have to decide for yourself if you think these young men were wrong in varying their speeches according to school policy; or if those very policies go against our personal liberties and deserve to be challenged.  I tend to agree with Remington's father, who said, “One of the lessons we have learned in all of this is: Well-intentioned people who don’t know policy/the Constitution can often implement rules/laws that infringe upon the rights of others. This is a microcosm of what is happening in our nation at large.”

1 Peter 3:15-16    "But in your hearts revere Christ as Lord. Always be prepared to give an answer to everyone who asks you to give the reason for the hope that you have. But do this with gentleness and respect, keeping a clear conscience, so that those who speak maliciously against your good behavior in Christ may be ashamed of their slander."
Posted by Pam Kohler at 7:00 AM